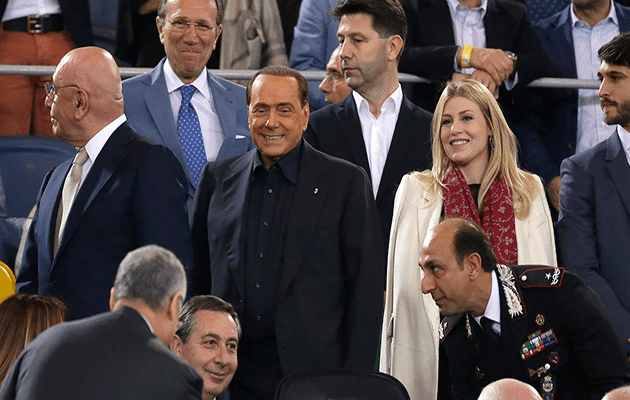 A magical era in Italian football on Thursday formally came to an end when Fininvest, the Berlusconi family holding company, announced that it had concluded the sale of AC Milan to Chinese entrepreneur, Li Yonghong.
Thursday’s sale, which values the club at €740 million,  comes at the end of two years of intermittent speculation and on-off deals involving the former European champions, a club whose name will forever be linked with that of former Italian Prime Minister and media tycoon Silvio Berlusconi.
In a joint communique Fininvest and purchase company, “Rossoneri Sport Investment Lux”, confirmed that the sale is the confirmation of an agreement first concluded in August of last year, in which Mr. Yonghong’s group agreed to buy a 99.93 per cent shareholding in the club.  Furthermore, the statement added:
“The purchasers have confirmed their commitment to effecting an important recapitalisation and patrimonial and financial strengthening of AC Milan…”
The joint statement gave no indication as to the exact nature of this “patrimonial and financial” strengthening but it is only logical to conclude that the new ownership intends to make serious transfer market funds available.   In recent years, Mr. Berlusconi has several times explained that, on his own via his Fininvest empire, he no longer had the economic clout to compete with heavily-backed clubs like Real Madrid, Barcelona, Manchester City, Chelsea, Paris Saint Germain, Bayern Munich et al.
Thursday’s sale comes after two years of negotiations with at least three different China-based groups, a year when at times it seemed that Mr. Berlusconi was reluctant to part with an important piece of the family jewellry.
Throughout his metamorphisis from media tycoon into successful politician, Mr. Berlusconi regularly flaunted his success with AC Milan as proof that he was a winner. Having bought the debt-ridden club in 1986 for approx. €8 million euro, Mr. Berlusconi presided over a golden era when the club won five Champions Cup/Champions League titles, becoming arguably the strongest club team in world football.
In recent years, Milan have been overtaken on the European stage by Premiership , Spanish and German clubs. Their last European success came in the 2007 Champions League whilst their last Serie A title win came in the 2010-2011 season
That lack of success worsened Milan’s economic situation with the club currently running at average annual losses of approx. €80-90 million euro.   In such circumstances, Mr. Berlusconi came under huge family pressure to sell off an asset that continued to haemorrhage money. Both Mr. Berlusconi’s elder children, Marina, head of the Mondadori publishing house, and PierSilvio, vice-president of the Mediaset TV group, are believed to have urged their reluctant father to sell.  The 80-year-old Mr. Berlusconi commented on Thursday: “Even if today I give up on all my administrative and representative roles, I will always be a number one Milan fan, a fan of the club that my father taught me to love as a child.”
For his part, Mr. Yonghong thanked Mr. Berlusconi and Fininvest, adding: “I also want to thank the fans for being patient.  From today we will be building the future.   Step by step, we will climb back to the top of the world.”
Not a lot is known about Li Yonghong, a point underlined by former Juventus and Italy coach Marcello Lippi, the current coach of the Chinese national team. Asked by Italian reporters about the new Milan owner recently, Lippi said that he is relatively unknown in China. In contrast, he suggested, the Chinese electronics giant Suning, which in June last year paid  €270 million euro for a 68.55 per cent holding in Internazionale, is very established and well known.
This point was also highlighted by ex-Juventus, Milan and England coach, Fabio Capello, who told Gazzetta Dello Sport: “We have just got to hope that they [the new owners] have the resources to compete with the English, German, Spanish clubs and with PSG.  So far, they have not looked like quite such a strong group, given that it took them a long time to wrap up this deal.  And that was unlike Suning, for example, who closed their deal (with Inter) immediately, proving that they had serious resources.
Ironically, the new-look AC Milan makes its official debut in Saturday’s eagerly awaited Milan derby against Chinese/Indonesian-owned Inter.  The game comes at a critical moment, given that just last weekend AC Milan (6th, 57pts) overhauled Inter 7th, 55pts) in the Serie A table, as both sides battle for a Europa League place next season.
The sale of AC Milan underlines a curious reality of these Italian times.  Namely that, despite its obvious decline in recent years, the once mighty calcio still attracts foreign investment. Apart from Inter and AC Milan, three other Serie A clubs – Bologna (Canadian), AS Roma and Palermo (both USA) – are currently “foreign” owned. Evidently somebody out there thinks that the seeming Decline and Fall of Italian football represents but a passing moment.