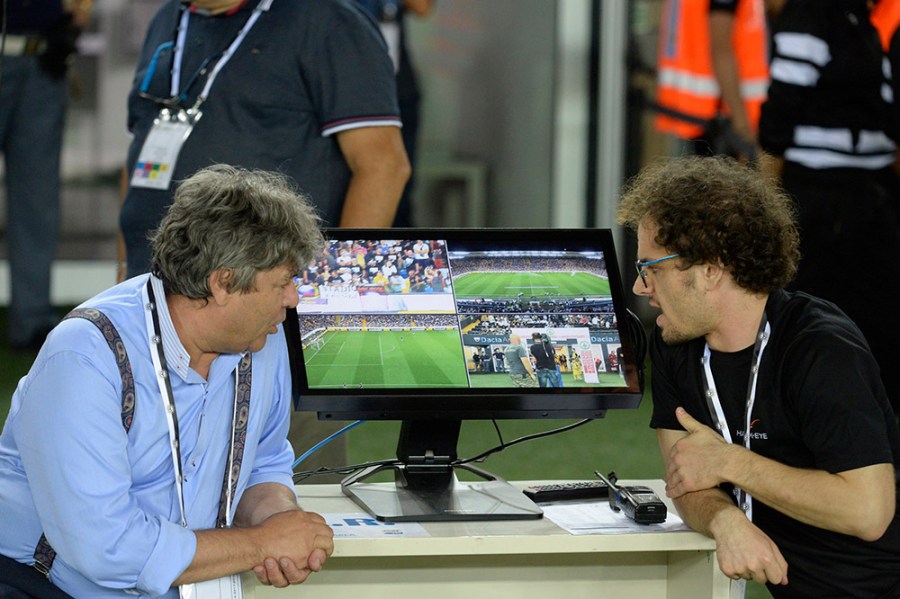 Cometh the hour, cometh the VAR. Forgive the poor rhyming but arguably the most significant aspect of last weekend’s opening of the new Serie A season concerned not Juventus, Milan or Inter but rather the introduction of the VAR, the Video Assistant Referee.
It took the VAR just 35 minutes to impact upon Italian football in the opening game of the season, Juventus v Cagliari.  That came when the two off-field VAR referees advised on-pitch referee Fabio Maresca to consult the video replay. In truth, this was an incident that might have escaped many referees.
With the score on 1-0 for Juventus, a lively Cagliari played Croat striker Duje Cop into the area. As the forward was hitting his shot on goal, he was tackled by Juve’s Brazilian defender Alex Sandro, well inside the box. At first glance, this was a 50-50 clash. Looked at on the replay, this was a clear penalty.
At first, Maresca awarded a corner kick to Cagliari. However, in the meantime, the video refs had reviewed the incident and consequently alerted him. At that point, Maresca stopped Cagliari from taking the corner, made that video rectangular gesture well familiar to rugby fans and then ran over to the sideline to consult the TV images.
Very quickly, Maresca corrected himself, running back to the area and pointing to the penalty spot. Italian football’s first video penalty had been awarded. All in all, the interruption to play had lasted 1’37”. It had all passed off peacefully with no hysterics or polemics.
Ironically, when Brazilian Diego Farias took the penalty, his shot was rather central, allowing Gigi Buffon to pull off a relatively straighforward save (by his standards, that is). This time at least, the man (Buffon) proved superior to the machine (VAR).
All in all, the VAR made a more than satisfactory debut last weekend with the video refs twice intervening to signal a mistake, duly corrected, by their on-pitch colleague.    Not only did Maresa award that penalty to Cagliari but in only the third minute of Crotone v AC Milan, referee Maurizio Mariani awarded a penalty to Milan after defender Federico Ceccherini had brought down Milan striker Patrick Cutrone.
At first, Mariani awarded both the penalty and a yellow card to the Crotone defender.   Having consulted the VAR, he confirmed the penalty but he changed his decision on the defender, correctly awarding him a straight red.
Needless to say, though, the first weekend of the VAR did not pass without polemics.   This came in relation to an incident during Bologna’s 1-1 away draw with Torino. In the 84th minute of the game, Torino appeared to score a valid winning goal that was, however, immediately overruled. Nor was the VAR able to intervene to set the matter to rights.
What happened was the following. Making a tackle on the edge of his own area, Bologna striker Mattia Destro unintentionally knocked the ball through to Torino striker Andrea Belotti. The latter first shot on goal, had his shot saved and then passed the rebound to Alex Berenguer who scored with a first time effort.
The goal, however, was overruled because the linesman had signalled Belotti as offside, having failed to notice that the ball had been passed to him by a Bologna player not by a Torino team mate. Accordingly, the referee immediately awarded the offside, meaning that Berenguer’s “goal” had been scored after the whistle. Now under the canon law of VAR refereeing, the VAR referees cannot intervene after the referee has stopped play.
None of which, of course, much pleased Torino coach, Serb Sinisa Mihajlovic, who pointed out, not without reason: “There were two mistakes. First, they [referee and linesman] did not notice that it was Destro and not a Torino player who had passed the ball to Belotti. Apart from the referee, all of us, including the 19,000 spectators, saw that. Then his second mistake was to blow the whistle. The refs have been told, that if there is a doubt, they are to wait until the move has finished before blowing so that they can then consult the VAR.”
For the time being, the VAR swings into action only in four basic situations: to verify the validity of a goal; to judge a penalty award; to judge on a sending off; and finally to point to cases of mistaken player identity. Thus far, however, with the exception of Mr. Mihajlovic, a majority of commentators would argue that the VAR has got off to an impressive start and one from it will be very difficult to turn back.
No doubt, we will learn much more about the future of the VAR when we come to crucial moments in hotly contested “big matches” such as a Juventus-Milan, Juventus-Napoli, Roma-Lazio, Milan-Inter etc. At this stage, though, the VAR is looking good.
As for the first weekend of results, well here there was nothing surprising to report as Juventus beat Cagliari 3-0, Napoli beat Verona 3-1, Inter beat Fiorentina 3-0, Milan beat Crotone 3-0 and Roma beat Atalanta 1-0. In Rome on Saturday night, we have the first “biggie” of the season when Roma play host to Inter. Do not be surprised if new Inter coach Luciano Spalletti pulls off a win against the club he coached last season.