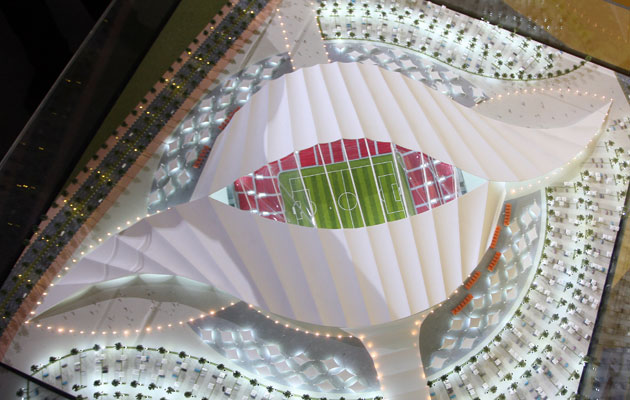 Qatar’s hosting of the 2022 World Cup is on track for a string of firsts: it will be the first World Cup played ‘out of season’; the first in the Middle East; and the first at which fans may be able to attend three matches in one day.

The rescheduling of the tournament to avoid searing summer temperatures in the Arabian Gulf means a kick-off precisely six years from today – on November 21, 2022, at the new city venue of Lusail – with a final shortly before Christmas, instead of in the traditional June/July slot.

Asia has staged the World Cup once, in Japan and South Korea in 2022, but world federation FIFA has never before stepped out into one of the most troubled geopolitical regions on the planet.

Until now logistical and infrastructure considerations dictated that one match per day was the most even the most enthusiastic visiting fan could attend.

Instead, Qatar’s Supreme Committee for Legacy & Development has marked the ‘six years out’ day to say that the state’s organisational system will be able to cope with a one-day multiplicity of matches.

Visitors familiar with the daily traffic gridlock in Doha may consider such a prediction extravagant.

So may long-time World Cup fans inured to long, time-consuming walks through outer and inner security zones plus at least two checkpoint queues (bag searches and ticket checks) before coming anywhere near the stadia turnstiles.

However, the Qataris won hosting rights against all the odds, have maintained a firm grip amid the FIFA scandals and workers’ rights issues, and are confident of a people-moving capacity beyond anything seen at previous World Cups, European Championships and Olympic Games.

Such systems would set a revolutionary benchmark – and challenge – for future event organisers (One option could be security ‘clean zone travel’ for multiple-match ticket holders).

The Supreme Committee is promoting Qatar 2022 as “the most compact World Cup in history, allowing fans to watch multiple live matches per day.”

A new satellite mapping tool has offered evidence that the total ‘tournament footprint’ will be less than half the size of London “with travel times between stadiums ranging from five minutes to 60 minutes.”

For example, the longest distance between any two of the likely eight venues, Al Bayt/Al Khor City in the north and Al Wakrah in the south, is 35 miles, only seven miles further than the distance between Liverpool’s Anfield and Manchester United’s Old Trafford.

The shortest distance between any two venues, Khalifa International and Qatar Foundation, is a mere 3.5 miles, one mile shorter than the distance between Arsenal and Tottenham Hotspur in north London.

Contrast this with Russia 2018 whose ‘footprint’ stretches a staggering 1,200 miles from St Petersburg in the north to Sochi in the south and 1,500 miles from Kaliningrad in the west to Yekaterinburg in the east. This is roughly equivalent, in comparative terms, of Helsinki to Rome and of Paris to . . . Moscow

Nasser Al Khater, Qatar 2022’s assistant secretary-general, tournament affairs, said: “We have always maintained that Qatar’s size will make it one of the most unique World Cups ever that will benefit both fans and players.

“For fans, this will be the ultimate tournament for live game experiences.

“The compact nature means short travel times from the airport and accommodation to fan parks, tourist attractions and most importantly, match venues, enabling fans to watch more than one live game a day. Qatar is also only an eight hour flight for two thirds of the world’s population. This is unique compared with any other FIFA World Cup.”

Not only will this benefit visiting supporters but also players and officials.

Al Khater added: “For the teams competing, it will also be a huge advantage as they will be based at one location for the entire tournament, play in a consistent climate throughout and experience minimal travel between matches.

“If you compare this to the United States’ group stage travel during Brazil 2014 – which meant nearly 9,000 air miles just for their first three games – you can see how this will clearly benefits the players.

“With one training base, one hotel and no need for exhausting flights between stadia for the entirety of the tournament, teams will have the maximum time possible for preparation, recovery and rest.”

Fans who cannot make it to the finals need not worry. The Supreme Committee estimates that Qatar’s geographical situation means it can guarantee prime time viewing for more than three billion around the world.