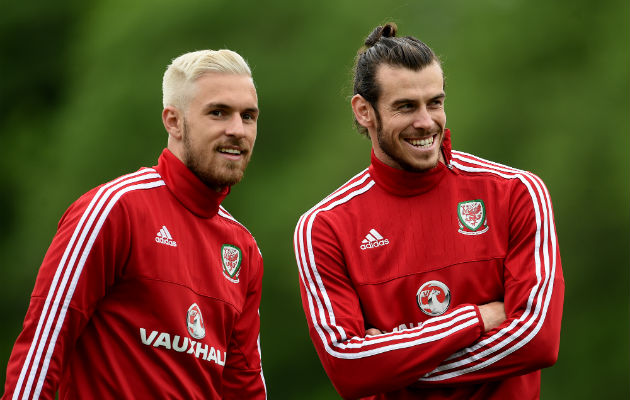 Wales midfielder Aaron Ramsey has had his say on Wales, Gareth Bale’s fitness and his bleach blonde haircut.

Ramsey will lead the Welsh midfield into their first major international tournament since 1958 after a memorable qualifying campaign.

The Arsenal player hopes to mark his stamp in France at the Euros and help Wales qualify from the group stages, however the pre-tournament build up has been dominated by a rather colourful feature.

Ramsey said: “I have been contemplating it for a while [dying his hair] and just thought, ‘Yeah. why not?’

“It was a bit of a shock to some of the lads but a lot of them are saying they are having it now.

“My main target is to help Wales get out of the group stages and then see where we go from there. But I want to make an impression on the field.”

Gareth Bale was in discomfort during the latter stages of Real Madrid’s Champions League final win but his compatriot said he has overcome the pain and is looking forward to the Euros.

Ramsey added: “He is good, he has overcome his cramp. He is looking forward to it.

“It is a great achievement winning two Champions Leagues, he is still only young as well so maybe there might be many more for him.

“I am delighted he won it and he came back fit.”