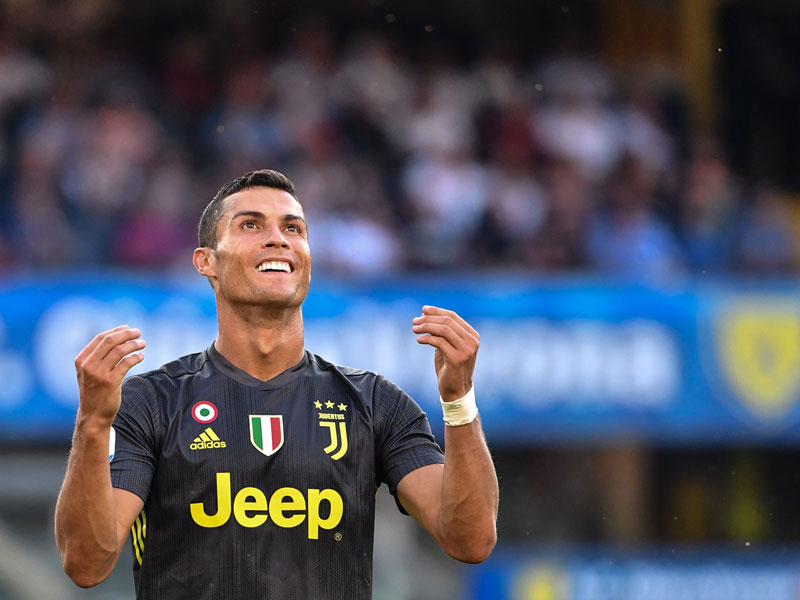 “Sorry love, I won’t be at the Church today, I couldn’t miss seeing Ronaldo make his debut for Juve…”
That banner, displayed during Juve’s 3-2 away win against Chievo last Saturday, was just one more reminder that things are about to change around here.   CR7 made his keenly awaited debut for his new club on Saturday on the opening day of the new season. If the signs of his first match for the “Old Lady” are anything to go by, then the Juventus fans could be in for a very good time.
It is not that Ronaldo set the world on fire, scoring pyro-technic goals or weaving his way past six defenders before sending in a perfect “assist”. No, it was much more what Juventus coach Massimiliano Allegri afterwards called the “simplicity” with which he seemed to fit into the Juventus shape of things, or more precisely, the simplicity with which Juventus fitted into the Ronaldo shape of things.
Good players can always play with good players. So, in a sense, no one should have been much astonished that Ronaldo almost immediately established himself as the reference point of the Juventus solar system, the star around which the other stars seemed happy enough to revolve.
It was not that he started off with a bang. On the contrary, four and a half minutes has passed and Juventus were already 1-0 up before he touched the ball for the first time. However, as the game wore on, he gradually worked his way into the match. Significantly, for someone who has been back training for less than three weeks, he looked sharper at the end of the 90 minutes than at the beginning.
From now to the end of the season, there is going to be an unending debate of Encycolpedia Brittanica proportions as to what his best position with the Old Lady will be. On Saturday, he started off playing up front on the left alongside Argentine Paulo Dybala in an aggressive 4-4-2 formation. By the end of the game, he had moved out to his familiar left wing spot, to make room for central striker, Croat Mario Mandzukic.
[collection name=”small” accordion=”mobile” excerpt=8]
Many critics argue that this is his best position, using his genius to create something for the central target man in something like the way he would create chances for Frenchman Karim Benzema at Real Madrid.    For our money, both positions are good, such is his innate ability. Coach Allegri sounded like a very satisified man by the end of the afternoon, notwithstanding that the Juventus win only came thanks to a 93rd minute goal scored by Federico Bernardeschi, saying:
“Cristiano put himself about and moved really well off the ball but his team mates did not always read him well… You can see immediately that he is a very different type of player…
“One thing, though, is he has settled into the squad without any complications, that’s very impressive… I know he didn’t score but that was just the way it was going to be on his debut…”
Reports suggest that Ronaldo has already passed his first serious internal Juventus test with flying colours. In other words on Friday night, at the team pre-match meal, he stood on his chair and sang a song for his new colleagues, a little “initiation rite” that awaits all the New Boys at Juventus.   History does not tell us which song he sang but the manner in which he linked up with his team mates on Saturday’s debut would suggest that not only were they all singing from the same hymn sheet, but that they were all in tune, too.
Given the good start, marked by a goal after only three minutes, you would be entitled to ask how come Juventus did not secure victory until the 93rd minute. To be fair, scoring early on a hot August evening probably did not work to Juve’s advantage.
Forced to make the running against an understandably defensive Chievo, Juventus ran a little bit out of puff on the warm evening. Two defensive distractions, in a game that was basically played almost entirely in the Chievo half cost them dear, putting them 2-1 down after goals from Mariusz Stepinski and fromer Sunderland player, Emanuele Giaccherini.
In the end, it required two goals in the last 20 minutes (own goal Bank and opportunistic tap in for Bernardeschi) to pull this one out of the fire for the reigning champions. In their best battling tradition Chievo did not sell their hides cheaply and, indeed, they could feel a tad disappointed that they did not manage to hang on for a 2-2 draw.
Allegri was entitled to feel happy with his team even if he now must sit down and work out whether such as Mandzukic and Bernardeschi are more suited to playing alongside Ronaldo than Colombian Juan Cuadrado and Brazilian Douglas Costa. That will be for the future.
In the meantime, CR7 has given fans a taste of what is to come. Even on Sunday, 14 hours after the game, he was still making himself heard and felt. On Sunday morning, he posted an Instagram which showed him working out in his own private gym in his new Turin home. CR7 trains 7 days per week was the message.
It looks that might be the first of many messages this season, illustrating the extent to which a new, potentially dominant star, has moved into the Juventus solar system. For Juventus, winners of the last seven Serie A titles, things have got off to a good start. For Ronaldo too.
Stay up to date with all the news and transfers by clicking on the highlighted links.
Don’t forget to follow World Soccer on Facebook and Twitter.