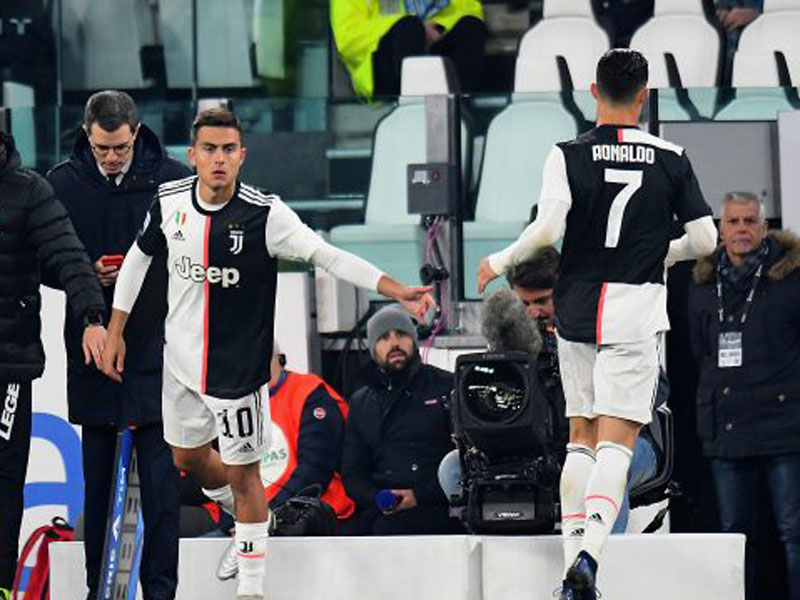 So, was it just a lover’s tiff, an understandable short-lived moment of anger or did it mean something more profound? That $64 million dollar question prompts itself in the wake of Sunday night’s Juventus v AC Milan clash, an enthralling game marked as much by Juve’s late 1-0 win as by the fact that, for the second time in five days, it saw CR7, the extra-terrestrial Cristiano Ronaldo, reduced to human normality as he was substituted midway through the second half.

With the score on 0-0, with 55 minutes on the clock and with Juventus apparently going nowhere against a surprising AC Milan, Juventus coach Maurizio Sarri committed an act of quasi-sacrilege – he took off Ronaldo, replacing him with Argentine star, Paulo Dybala. If he did so, Ronaldo’s exit from the pitch, muttering something that seemed less than polite in the direction of Sarri, hardly looked like jolly hockey sticks.

On the contrary, Ronaldo indicated his level of dissatisfaction by not only heading straight to the dressing room rather than the subs’ bench but also by packing his kit and heading home even before the final whistle. Mind you, had he stayed pitchside at the Allianz Stadium, it might not have improved his overall mood.

The thing is that Juventus won this game thanks to a 77th minute moment of magic from Dybala, no less, the man who had replaced Ronaldo. Hard to argue that the coach had got it wrong, no?

Inevitably, stats in hand, commentators could only point out how remarkable was this substitution, Ronaldo’s second of the week. We discovered that in 820 clubs games, CR7 has been substituted before the 60th minute, only 10 times. Last season at Juventus, coach Massimiliano Allegri substituted him just twice all year.

For Ronaldo, too, the uncomfortable reality is that on both occasions on which he was substituted last week, against Milan on Sunday night and against Lokomotiv Moscow in the Champions League last Wednesday night, the replacement players won the game for the Old Lady. On Sunday, Ronaldo’s direct replacement, Dybala, scored, whilst in Moscow on Wednesday, it had been Brazilian Douglas Costa (on for German Sami Khedira) who had won the game in injury time with a spectacular slalom run from the wing in which he danced past five Lokomotiv defenders.

The point is that on both occasions, with Ronaldo on the field, Juventus were less than all dominant and struggling to wrap up the game. Both Douglas in Moscow and Dybala in Turin provided a massive blast of pace and invention in the final 15 minutes of two difficult games. Speaking on Sky Italia after Juve’s 1-0 win over Milan, former Juventus and AC Milan coach, Fabio Capello, explained Sarri’s substitution of Ronaldo, saying:

“It has been three years since Ronaldo last dribbled his way past an opponent…he’s not right. Sarri showed a lot of courage…by making that substitution, he won the game for Juventus…”

So, where do we go from here? Coach Sarri played down any speculation that the last week has in some way represented a first breach in the thus far idyllic relationship between Ronaldo and the Old Lady, saying:

“We have to thank Ronaldo for being willing to play when he was not in great condition…That’s why I substituted him, it seemed to me that he really wasn’t well. The fact that he got annoyed is only normal… This is nothing to do with his age (34)… in the last month, he has had a little problem with his knee, due to a bang in training…”

What seems sure is that the last week has marked the first time since his arrival in Turin last July that Ronaldo has looked anything other than indispensable for the Juventus cause. Where that new-found “normality” takes Ronaldo now clearly will depend on his physical well-being.

It may well be that, having regained 100% match fitness, Ronaldo will return to his domineering self, calling many of the shots and leading from the front. Time will tell…but, obviously enough, time is not always on the side of a 34-year-old professional footballer.

In the meantime, it is ironic to reflect that Juventus owe much of their success of the last week (indeed month) to their two Argentine attackers, Paulo Dybala and Gonzalo Higuain. If Dybala proved to be the matchwinner against Milan, so too did Higuain have a huge impact in both Juve’s 1-0 Turin derby win over Torino ten days ago as well as in the Lokomotiv (2-1 win) and Milan games. As we have said before…just think, both men seemed firmly on the “for sale” list in the summer. Maurizio Sarri must have been counting his lucky stars to ensure that no club, all summer long, came up with an offer that Juventus could not refuse.

As for AC Milan, you have to feel just a little sorry for them. Had they drawn with Juventus, it would have been no robbery. For much of the first half, they had not looked like a side that was trailing Juventus by 16 points as attackers Pole Krzysztof Piatek and Turk Hakan Calhanoglu created a series of chances for them. (Milan now trail, of course, by 19 points, whilst they are just four points clear of the relegation zone, currently in 13th place).

Gazzetta Dello Sport pointed out the other day that there is a huge gap in experience now between Milan and Juventus as compared to the Silvio Berlusconi Milan ownership days when the two sides would meet in the Champions League final (at Old Trafford in 2003).  One “stat” makes the point – the current Juventus squad have amassed 1252 appearances in Champions League games, whilst Milan have only 121. The times have changed

Despite that, Milan comported themselves more than well against Juventus on Sunday night. The impression was that it will be only a matter of time before coach Stefano Pioli gets Milan back on the winning road

As for Juve, one suspects that a lot of energy over the next month will be focussed on reassuring fans that Ronaldo, angry stump-off notwithstanding, is still their Main Man. Between now and next May, after all, he could prove useful.