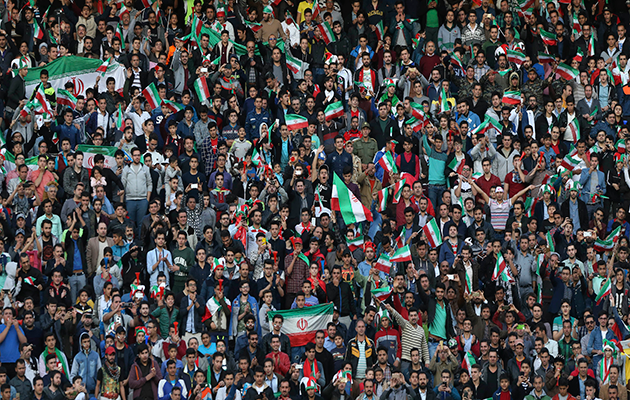 Fans attending Tuesday’s World Cup qualifier between Iran and South Korea in Tehran have been asked to chant religious slogans rather than sing football chants, because the match takes place on a holy day.

The fixture is being held on the first of two mourning days on the Shia Islam calendar. Black flags will be raised in the Azadi Stadium and some terraces will be set aside for crowds of mourners. During Tasua and Ashura, Shia Muslims gather to mourn the death of Imam Hussein along with 72 of his followers in the 680 AD Battle of Karbala in Iraq.

South Korea will wear black armbands as a mark of respect to the hosts.

Some clerics did not want to see the game played at all and would have preferred Iran forfeit the fixture, but it has been decided mourning will take place at the 100,000-seat stadium.

Ayatollah Mohammad Yazdi wrote an open letter saying the game should not be played and feared what would happen if Iran scored a goal, sparking celebrations for the home team.

“Some may say that by not playing the game we will pay a price, but it is better to pay a price than have our sanctities harmed,” he argued.

“If the Iranian national team scores a goal, who can guarantee that no one in Iran will jump up for joy?”

“Imagine that Iran scored against South Korea and some people cheered,” he said.

“Does that mean that the people are cheering the martyrdom of Imam Hussein?

“If someone after years meets his mother, father or child on the eve of Ashura, should he then not be happy to avoid violating the sanctity of the imam?

“The duty of the clergy is to fight against the weak points of the society and the superstitious customs that have chained people’s hands and feet — not to ride with that current.”