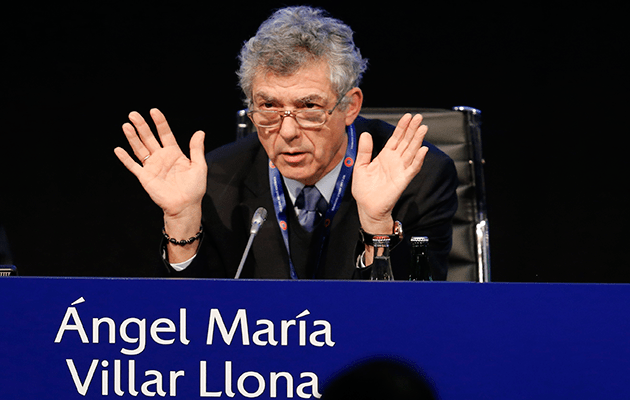 Spanish federation president (RFEF) Angel Maria Villar-Llona has come under fire from presidential rival Jorge Pérez who says that he owes his position of power to a long-running system of patronage.

Villar-Llona is currently facing a lawsuit on charges of electoral manipulation and breaking Spanish sports law, brought by another candidate for the presidency, Miguel Angel Galan.

It is alleged that the RFEF president has deliberately delayed the electoral process and in doing so has violated a ministerial order that is enshrined in Spanish law. He has called for Villar-Llona to be disqualified from public office and to be banned from standing for the forthcoming lection.

Pérez, though less critical of Villa-Llona, claims that the electoral system has been manipulated in a way that favours the incumbent.

“They have woven a patronage system for many years. And they have done many good things, do not say no. But that model is exhausted,” Pérez told AS.

Pérez called for a secret ballot and for it conducted electronically.

“I want people to vote without fear of reprisal,” he said.

Spanish football is at a crossroads with the leading club sides enjoying unprecedented success in Europe, while the previously dominant national team has underperformed at the two most recent international tournaments. Much of the national team failure is being blamed upon Villar-Llona and the growing gap between the federation and La Liga.

“What makes no sense is that there is no relationship between La Liga and the Federation.” continued Pérez. “La Liga has grown so much that they can help us more than we need them. So if I am president there will be full cooperation.

“What I want is to support everyone, professional football, women, II, II B, referees … I want to be the candidate for everyone.”

On Villar-Llona’s UEFA presidential ambitions (he is currently interim president), Pérez, rather sardonically, noted that his rival already spends more of his time on UEFA and FIFA business than he does on the Spanish federation.

Pérez was also asked why the RFEF had lost so many sponsorships in recent years, and he put the blame for this firmly at the door of Villar-Llona.

“I think it’s carelessness, inattention, not to answer the sponsors and even not answer when they wanted to do an activation. The current organization is a mess, a mess. I want to clearly separate the economic and sporting side.”