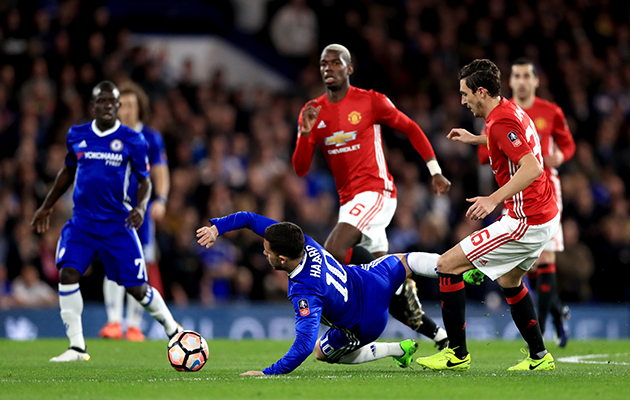 Neither during the commentary itself nor in the shape of Ruud Gullit down on the pitch, nor in the post-match interviews was there any indication of United’s cynical maltreatment of Eden Hazard.

True the Chelsea manager Antonio Conte did not mention it when interviewed after the game but he had plenty and bitterly to say about it off camera.

“For 20 or 25 minutes it was impossible for Hazard to play football,” Conte said. “I see only that he got a lot of kicks. He started the game receiving kicks and he finished receiving kicks.”

To ignore such an accusation is rank bad journalism. A dereliction of duty on behalf of presenter Gary Lineker and his studio guests Alan Shearer, Frank Lampard and Phil Neville.

Jose Mourinho can hardly be exculpated. If he, in the absence of Zlatan Ibrahimovic, had a match plan, this would appear to have been it. Taking it in turns to foul Hazard plainly avoided any united player being sent off for a second yellow card; if they even got a first one. Only Ander Herrera was expelled; guilty of a rash and costly second foul having already received a yellow card.

Having said which, one should deplore the new-fangled ill-conceived policy of the FA decreeing that 6th Round ties which end in a draw must result not in a replay but in extra-time. A shocking disadvantage to the visiting team. Ironically, had United managed to score with that glorious effort by Marcus Rashford, it would merely have condemned them, a man short, to an extra half hour.

The FA Cup, let us remind the Football Association, is the oldest of all cup competitions, the begetter of the Football League when the nascent professional clubs needed something more than a knockout competition to stay financially afloat.

At least this torrid affair saw the astonishing N’Golo Kante show yet again what a fine player he is, even to the rare extent of scoring what proved to be the winning goal; from a most unlikely position. United’s David De Gea was caught off balance, having put his weight in anticipation, on his left foot, so that he had no chance to reposition himself to deal with the shot. A mere 5 foot 7, little Kante is a testimony to the enduring physical democracy of football. You don’t have to be big to be effective.

Mourinho, in the days he managed Chelsea, spoke out bitterly to protest the treatment to which hazard was subjected. He was being punished by opponents but not protected by referees. Marco Rojo stamped on Hazard and though referee Michael Oliver didn’t appear to see it, it obviously should not go unpunished.

Note how easily Rashford left Gary Cahill for dead when he came so close to equalising. I still cannot see Cahill as an adequate England defender but then who is? To give him and his international prospects his due, Chris Smalling had a commanding game, but this is another centre back who does not always convince.

By the way, why do we now see goalkeepers rather than centre backs described as stoppers.