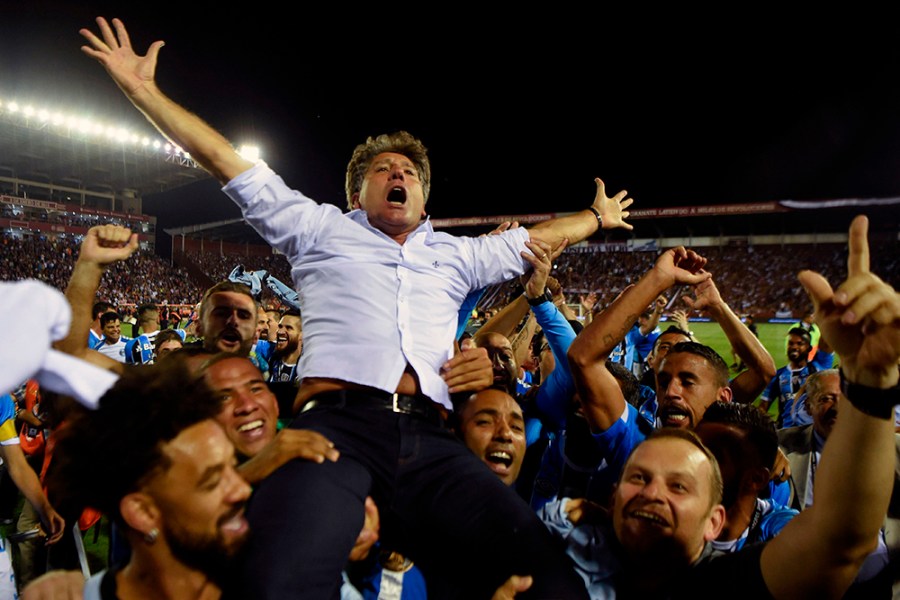 When Gremio beat Hamburg to win the Intercontinental trophy (World Club Cup) back in 1983, the star man was a young winger with the body of a centre-back. His name was Renato Portaluppi, or, as he became widely known elsewhere in Brazil, Renato Gaucho – the Gauchos are the people from the southern state of Rio Grande Do Sul, main city Porto Alegre, where Gremio are based.

But Renato Gaucho seemed something of a misnomer. After he left Gremio in 1987, most of his career was spent in Rio de Janeiro, where Renato turned into a stereotype of the local playboy, with his beach lifestyle and brash talking. He played many times for Brazil, though his impact was limited. He had a very unsuccessful spell with Roma at a time when Serie A was football’s global meeting place. For all that, he thinks very highly of himself. If Cristiano Ronaldo rates himself as the greatest in history, then Renato has argued that he was better than Ronaldo.

It is precisely this kind of peacock braggadocio that led most to believe that he would not have a long and successful coaching career. True, he took Fluminense to the final of the 2008 Copa Libertadores.  But, it was felt, the end of his shelf life was not far away. At the time when the players became too young to have witnessed his exploits on the field, it was thought, Renato would be obsolete.

Instead of which, he has become one of the outstanding figures of South American club football in 2017.  His Gremio side recently won the Libertadores, and are now going for the Club World Cup. Renato has become the first Brazilian to win the former trophy as player and as coach, and now aims to do the same with the latter.

There is clearly more to him than the strutting, boastful figure he sometimes likes to portray.

True, he has been working within a sound context. In recent years Gremio have belied their reputation for rugged, pragmatic football. The club’s youth development work has been focusing on turning out technically gifted youngsters, and under predecessor Roger Machado the side were possession-based and eye-pleasing.

Renato has given continuity to this work. Support striker Luan, so intelligent at finding space between the lines, has blossomed still further during his reign, and it was Renato who launched the career of Arthur, a little Iniesta-like midfielder who is understandably interesting Barcelona.

But the coach has also done more. Perhaps the 1-0 win at home to Lanus in the first leg of the Libertadores final was Renato’s finest hour as a coach. Gremio’s passing game was not working.  Lanus were compact and cautious, and there was no space for the Brazilians to play their way through. So Renato improvised. He used all of his substitutions early, and went with an aerial bombardment. On came big centre forward Jael. On came versatile midfielder Cicero, full of penalty area presence. The two combined to score the only goal of the tie, the moment that Gremio got their noses in front.

And both players were Renato hunches – brought in on his say so because he thought they might be useful. The caricature of Renato – an image he has helped divulge – is of a coach more concerned with playing beach volleyball than studying the game and the opposition. The way he has conducted Gremio shows that there is much more to him. But can he now, with Arthur missing injured, go one better and lead Gremio to global glory?