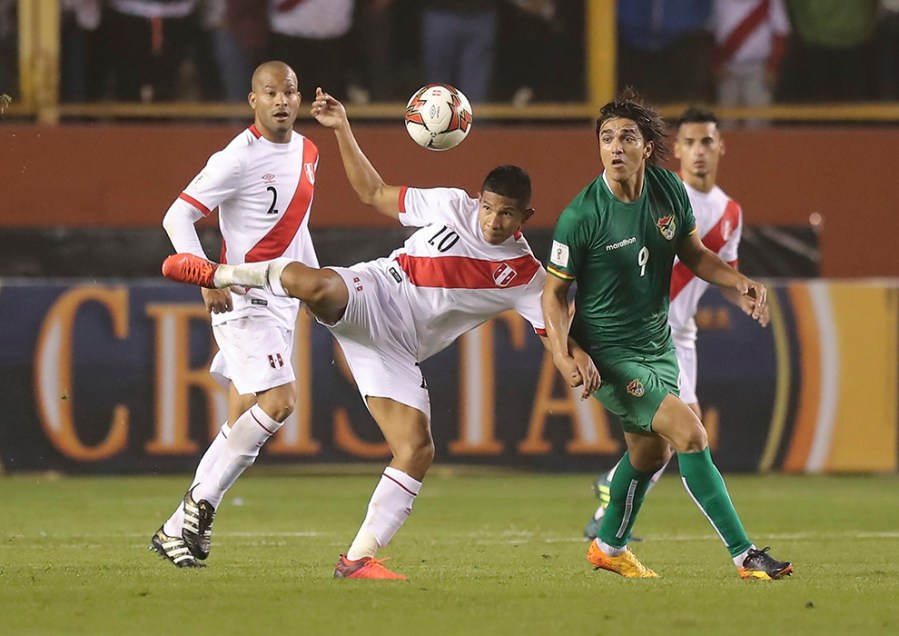 A stroke of fortune helped turn Peru from 2018 no hopers into a team with a real chance of making it through to Russia.

When the qualification campaign got underway it seemed to be a case of ‘here we go again’ for a side that has failed to reach the World Cup since the generation of Teofilo Cubillas bowed out in 1982. Hopes had been raised by encouraging performances in the 2015 Copa America, when Peru finished third. But they had done just as well in the previous Copa, four years earlier, only to nosedive once more when the qualifiers got underway.

They kicked off the 2018 campaign away to Colombia, played well, deserved at least a draw but went down 2-0. Then, five days later, they played a pulsating game at home to Chile, where a basic mistake cost them dear. They were already down to ten men when winger Andre Carrillo pulled up injured late in the first half. There was an absurd delay to replace him – perhaps Peru thought they could battle through until the interval. But they were down to nine, and Chile took full advantage. Peru’s 2-1 lead quickly became a 3-2 deficit. They had lost the initiative, and lost the game 4-3.

A few months later, when they went down to Bolivia, they seemed to have no hope. Seven games had brought them one win, one draw and five defeats. They were second from bottom, a full ten points behind leaders Argentina and eight points off fifth place, the play off spot.  It was surely too much ground to make up – especially for a team without an away win in World Cup qualification for twelve years – and with very few draws in that time.

Then came the luck. For the last ten minutes Bolivia had introduced Paraguayan-born centre-back Nelson Cabrera. He had lived in his adopted country for three years, long enough to gain Bolivian citizenship.  But FIFA rules call for a five year period of residency before a player can be naturalised. Cabrera was ineligible. The game, which Bolivia had won 2-0, was awarded to Peru by a 3-0 margin, with the decision recently upheld by the Court of Arbitration for Sport. By a strange method, Peru had their first away win in World Cup qualification since 2004. They also had three extra points, and their goal difference had been boosted by five. They were back in the race.

There is clearly a debate to be had about this disciplinary process. Clearly, the presence of Cabrera on the field for the last ten minutes had a negligible effect on the outcome. Any wrong that has been committed against Peru is ridiculously small when measured against the award to them of so many points and goals – which could make all the difference between going to Russia and staying at home. The real victims here are not Bolivia, who have no chance of making it to the next World Cup, but those teams who are competing with Peru for a place in Russia.

What is beyond dispute, however, is that Peru have reacted wonderfully well to the good fortune that fell their way. In the subsequent nine rounds they have accumulated five wins – including triumphs away to direct competitors Paraguay and Ecuador – two draws and just two defeats. They have put together three consecutive wins, and were the only team to secure maximum points from the recent two rounds.

The team that Argentinian coach Ricardo Gareca has patiently been putting together finally appears to have fallen into place. He can count on a top class centre-forward in Paolo Guerrero, and other, younger players are blossoming as well – such as Carrillo on the wing, playmaker Cristian Cueva, and, the hit of the campaign, versatile left footed midfielder Edison Flores, who has scored in each of the last three games.

Finally, it seems that Peru have acquired the self-belief they have been lacking for so long. And if they can avoid defeat in next month’s crunch game with Argentina then they will be favourites to make it through to Russia.

There is a problem, though – quite apart from the fact that Argentina are likely to come at them like a wounded beast. Peru paid a price for last week’s win away to Ecuador. Four players picked up cards and are suspended. One of them, Carrillo, is precisely the type of pacey winger to give the current Argentine defence nightmares.  His normal substitute Paolo Hurtado picked up a silly yellow card over-celebrating his goal against Ecuador and also misses out. Cueva, who might have enjoyed himself in Buenos Aires, took too long to leave the pitch when he was substituted and also picked up a needless yellow card. And centre-back Cristian Ramos, the team’s defensive rock, was sent off against Ecuador and misses out on the trip to Argentina.

This, then, really will be the test of the current team’s mental strength. And if Peru can pass it, then however controversial the award of those extra points, few could begrudge them their return to the World Cup.