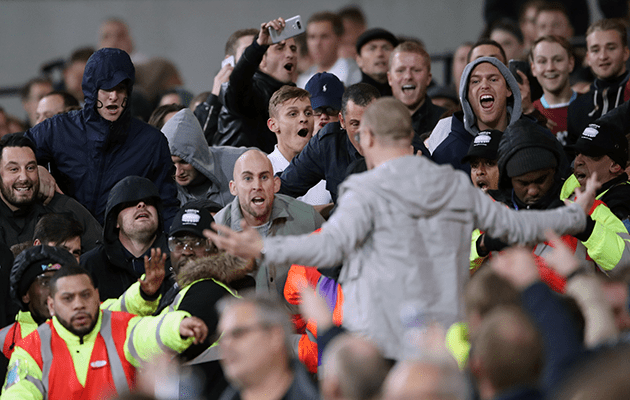 Where then does the blame lie for the appalling scenes of violence at the Olympic Stadium when West Ham United played Chelsea?

It was surely an accident waiting to happen for a variety of worrying reasons.

The overall proprietors of the Olympic Stadium depute its running to a second subsidiary body, which is responsible for inter alia, security. And evokes that familiar fans’ chant “You don’t know what you’re doing.” It is they and not West Ham who appoint and deploy the stewards, who, though admittedly given a tough task in a stadium never intended for soccer, are expected to keep order.

On that torrid occasion which followed others of lesser proportions in the stadium, this was manifestly beyond them. The role should surely have gone to West Ham’s own stewards, veterans of years at the admittedly smaller and far more compact Upton Park.

But, and here comes what you might call the $64,000 question. Where are the police?

Astonishingly, even at this point of a season well up and running, the communications facilities vital to police surveillance are still not in place and will not be for weeks on end.

The police, therefore, who play such a vital role at matches, say they cannot, at least initially, enter the ground. I have no idea who is responsible for the abysmal delays in installing such equipment. Suffice it to suggest that, it is surely arguable, the stadium should never have been opened yet for matches at all.

None of this is to exonerate the barbarism of the West Ham hooligans who had already created a torrid atmosphere by circulating a printed and wholly fictitious slur on John Terry. In parenthesis, though West Ham’s thugs were clearly the chief culprits, can one be sure that none of Chelsea’s own far from passive supporters was guiltless?

I don’t think the stadium should be permanently closed. Heaven forbid. I do think that closing it till the police can install their system would make sense. But I cannot imagine it will happen.