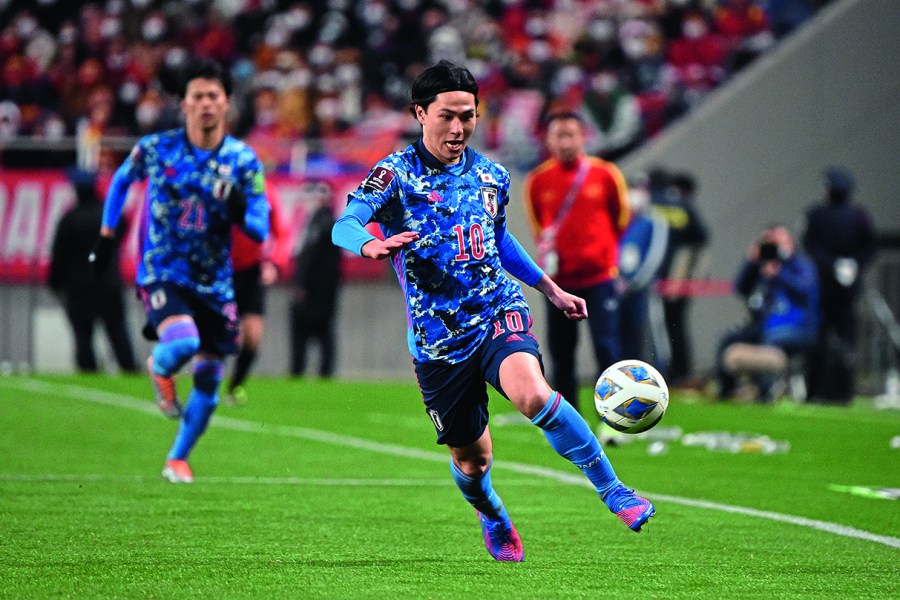 One of Asia’s best may struggle in tough group

Samurai Blue swept through the second round of Asian qualifying with a bucketful of goals – including a 14-0 victory in Mongolia and a 10-0 home win over Myanmar – scoring 46 times in eight games and conceding only twice. Takumi Minamino top-scored with nine goals and Yuya Osako netted eight.

Problems arose, however, when the national and Olympic teams were combined after the Olympic Games. Japan slumped to two defeats in their first three third-round qualifying ties, firstly in a massive shock at home to Oman, and then away to group pace-setters Saudi Arabia.

Needing, essentially, to win every match from there, that was exactly what they did with six straight victories, including revenge wins against Saudi Arabia and Oman and, crucially, victories home and away to Australia, eventually clinching their place at their seventh straight World Cup with a game to spare.

Japan’s favoured formation is a 4-2-3-1 with two holding midfielders, a single striker and aggressive wing play. Tight at the back and swift going forward, they are most dangerous on the counter-attack – which is the ploy they’ll need to adopt against Germany and Spain.

The speedy winger was Japan’s saviour, scoring and setting up the goals that put Japan back on course in Asian qualifying.

Do Japan still have a centre-forward?

Yuya Osako remained Japan’s first-choice centre-forward through qualifying, but his form has dropped for both club and country in the past year. Options include Takumi Minamino (level with Osako with ten goals in qualifying) – but that is not his best position – and the relatively untried Ayase Ueda or Ado Onaiwu.

Who will be selected on the wings?

Full-backs Yuto Nagatomo and Hiroki Sakai are both facing challenges from younger players such as Yuta Nakayama and Miki Yamane. Junya Ito is first choice further forward on the right but there are harder choices to make on the left, from the veteran skills of Genki Haraguchi to the dazzling dribbling of Kaoru Mitoma.

Will Takefusa Kubo find his feet?

The starlet has largely disappointed so far, but scored his first goal in the recent Kirin Cup. Immensely skilful, he has tight ball control and is entrusted with a lot of set-pieces, but still fails to connect well with team-mates in many vital situations.