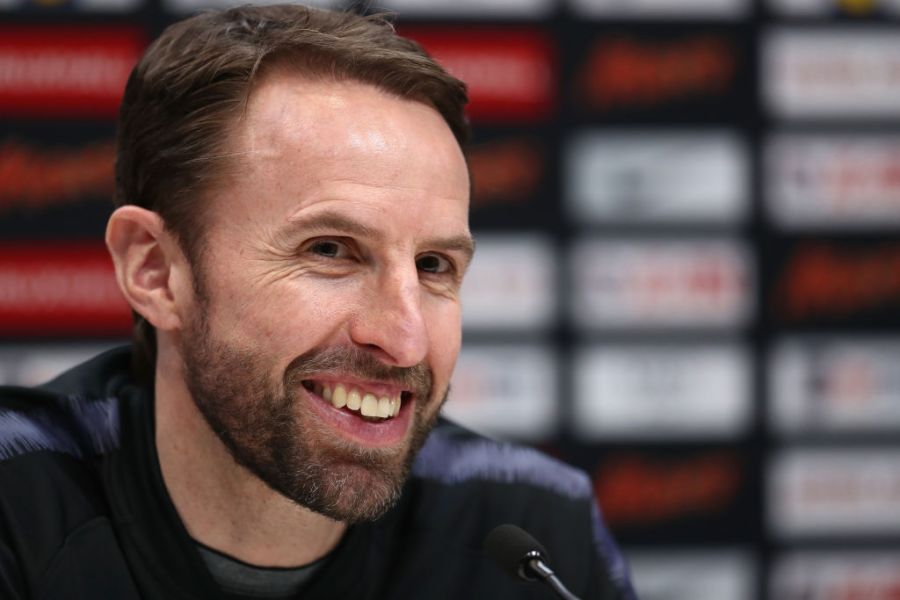 What is England’s approach to winning, and beating the top nations?

“We’ve got to go into big games with a very positive mindset. We know that we can hurt teams. We’ve got players who can score goals, and we know we don’t concede many. We’re an improving team that are going to get better over the next few years. When you look at the age of youngsters like Declan Rice, Mason Mount etc and the team that was on the pitch in the autumn – 19-year-olds, 17-year-olds, several 20 and 21-year-olds – the future is so exciting, but what we’ve got to do is make sure we’re getting results and progressing now, as well.”

It must be an ambition of every coach to dominate games and opponents, but are England better suited to be playing on the counter-attack?

“I think you need to be able to do all aspects. The reality is that against the best teams you’re more likely to be 50/50 ish in possession. You’re going to have to defend well as a team against top players with great vision and great technique. We have individual players who can create things and we have the speed to counterattack, so I think in the modern game you have to be able to do all of those things pretty well.” 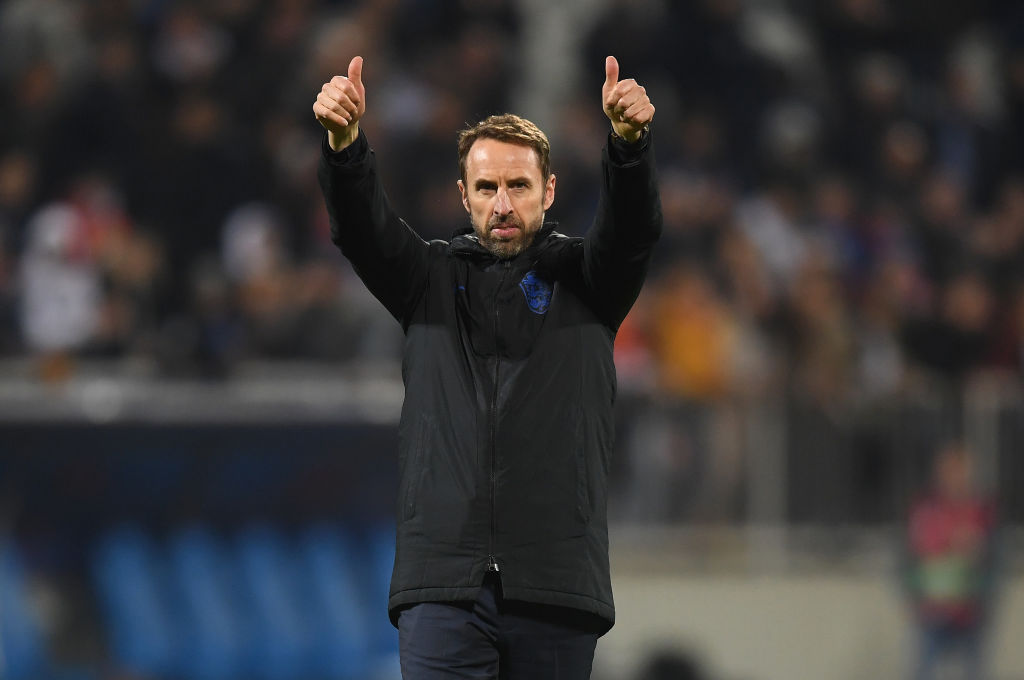 Euro 2020: Gareth Southgate, Head Coach of England acknowledges the fans after the UEFA Euro 2020 Qualifier between Kosovo and England at the Pristina City Stadium on November 17, 2019 in Pristina, Kosovo.

Given how many players you’ve got who can play in multiple positions, does that prepare you really well for playing in tournament football?

“I think what it does, is, it gives you opportunities. Opportunities to perhaps include more attacking players or if you’ve got players that can cover different defensive positions, different positions in the middle of the park. Maybe you’ve got the opportunity to take the odd wildcard or different ‘profiles’ of forward players. The easy way to do things is to go two for every position and build the squad that way.

“But so much depends on whether you might have a fitness doubt with somebody and how big a risk it is to take them. Again, if you have those players who can cover a couple of positions you can take a little bit more of a risk with another member of the squad. It’s a great advantage to have – especially when you have weeks like we’ve had in recent camps where you are losing players and you’ve got to be adaptable. Players who come can come in and play in different positions is a massive help for everybody.” 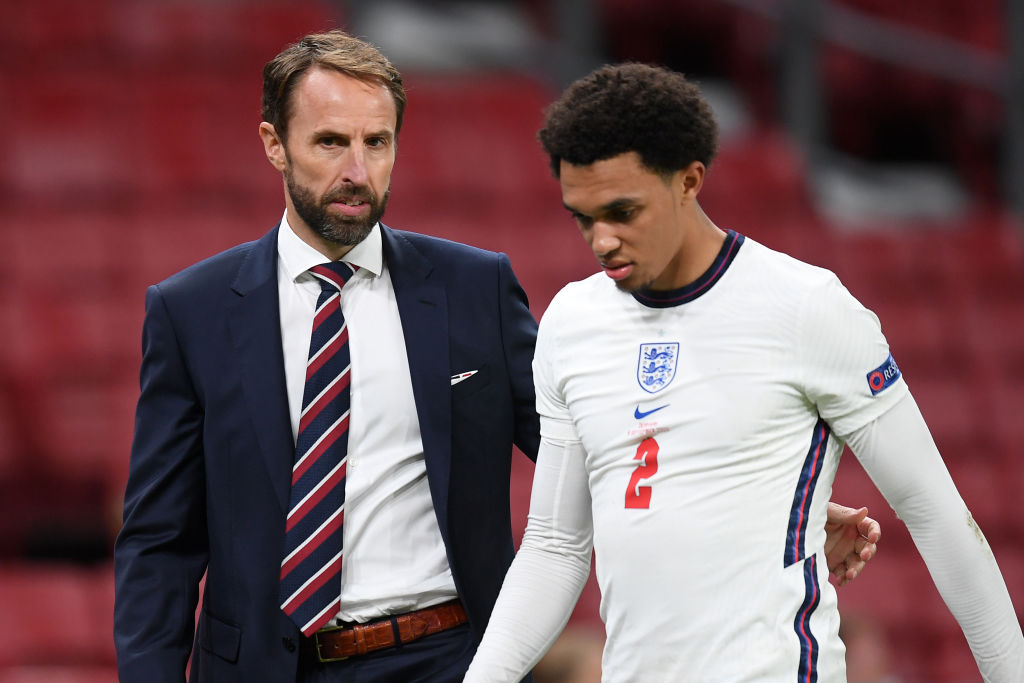 It’s often been said that qualifying is never an issue for England, but problems arise against the big teams. What are your thoughts on that?

”If you look at history we haven’t been a country that has beaten the big teams, and that is the great challenge for us. There’s been very few wins against big nations in tournaments – that’s fact. Even in qualifying I can go back to ‘98 when we qualified. I think Italy beat us at Wembley – Gianfranco Zola – we got a draw in Rome to get us through. The perception that we’ve been an outstanding nation does not tally with the results over the years, so that’s a great opportunity for this team.

“In the last few months before the World Cup we lost in France, we lost in Germany, draws with Belgium and Germany at Wembley – we weren’t able to nail the big teams. But since the World Cup we had the win in Spain, the draw and win in Croatia and the win against Belgium, so we’re starting to get those results; but to be a really top team you have to do that consistently, and that’s the great challenge for us. It’s not an easy one, there’s some fantastic teams out there, but it’s not one we’re fearful of.”

Jack Grealish has become a bit of a buzzword player for the fans over the last year. How difficult is it to avoid that clamour – as a manager – and to only pick the right players based on your own analysis?

“If you want to be manager of any big football club or national team then you’ve got to make decisions that you believe are the right ones for the team, for the whole group, for the right reasons depending on the opponent. That’s part of life at the top. If you don’t want that then go and work somewhere else, frankly. We are blessed with some very good players, but I’m imagining that when Sven had to pick from Beckham, Scholes, Gerrard, Lampard, Carrick – that was a pretty difficult choice as well.

“You had Champions League winners in every position – Rooney and Owen who was European Footballer of the Year at the time. All big managers – well, managers of big teams – have to make those decisions and you’ve got to be strong and make them for the right reasons. And… we need a strong squad. We will need more than 11 to win.” 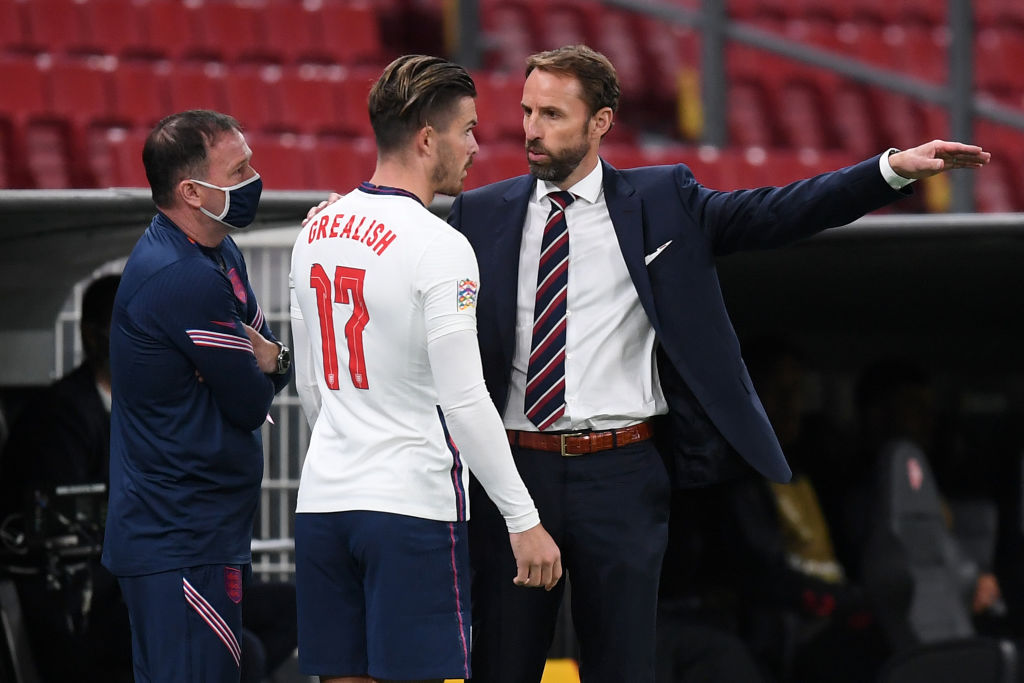 Euro 2020: Gareth Southgate, Manager of England gives instructions to Jack Grealish of England prior to him being substituted onto the pitch during the UEFA Nations League group stage match between Denmark and England at Parken Stadium on September 08, 2020 in Copenhagen, Denmark.

How good has it been watching John Stones over the last few months? Is it fair to say he’s been better than ever this season?

“It’s a huge plus for us, of course. John has played a lot of internationals for us and – for a period – we weren’t sure whether he was going to be able to recapture that form. When you invest as much time and as many caps in a player like that, and he disappears, that is a huge disappointment. But as I have said about Luke (Shaw), John deserves huge credit for turning that around, for finding that level of consistency. He’s played a big part in what’s looking like being a hugely successful season for Manchester City.

“He fits the profile of the way we want to play. He’s so comfortable with the ball – bringing it out – but also his speed defence as well. So, yes, it’s great for us to have him back.”

If you want to read more from Gareth Southgate, as well getting the inside track on every finalist ahead of this summer’s tournament, then make sure you pick up a copy of our Ultimate Euro 2020 Guide by clicking here. Don’t forget that you can also keep up-to-date with all of our online coverage by clicking here.