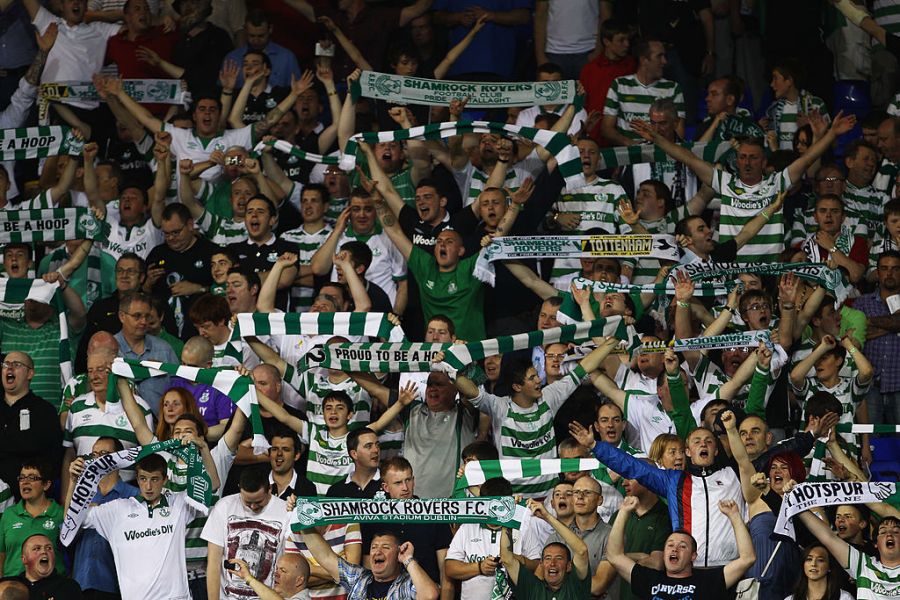 Ahead of a new League of Ireland Premier Division season, Shamrock Rovers manager Stephen Bradley talks about his playing and managerial career

In his younger days, Stephen Bradley was a wanted man.

Having made his name as a talented schoolboy at Dublin clubs Jobstown Celtic, Maryland Boys and Lourdes Celtic, he made the journey to England to try to find a club, just like so many young Irish players before him.

“I went on trial to around 15 different clubs,” Bradley recalls. “Manchester United, Liverpool, Manchester City – you name them, I was there. I was on trial at Chelsea when I was ten years old.”

Eventually, the young midfielder joined Arsenal in 2000, having been approached by an Irish legend. “It was Liam Brady, who was head of the Arsenal academy, that spotted me playing in a Dublin and District Schoolboys training camp.

“Liam was great to work with and overall I really enjoyed my time with Arsenal. But I suppose I got carried away with the big money and didn’t do all the training drills the coaches gave me.”

Bradley entered the professional game at a time when Premier League wages were growing – even for youngsters like him. His mother, Bernadette, was his agent. “She was brilliant and organised all of my contracts, boot deals and drink sponsorships for me.

“At first I was on a YTS scheme, but then I got a professional contract when I turned 17 and really didn’t know how to manage the money I was earning. At that stage, as a young Irish boy in London, I missed somebody who would put their hand on my shoulder and give me sound financial advice. I bought a house and a car in London, but there is no doubt I should have invested my money more wisely.”

In spite of Brady’s support, and captaining the reserves, Bradley never played a first-team game at Highbury. When the Gunners began recruiting young players from abroad, the writing was on the wall.

“Cesc Fabregas came from Spain in 2003 with a great reputation. I think at that stage I was more or less on my way out,” he admits. “I did play Under-16 and Under-21 football for the Republic, but never made the senior squad.”

Is the sight of young players crossing the Irish Sea to join the likes of Arsenal a thing of the past? Bradley doesn’t think so.

“We are losing 16-year-old Kevin Zefi to Inter in the summer,” says the Shamrock Rovers manager. “There is speculation that with Brexit, young Irish players will not be able to join English clubs until they are 18, but I think the English clubs will fight that rule.”

“My house was broken into and I was stabbed in the head in the raid and was badly injured. It was so bad I nearly died.”

Clearly, it was time to leave London. “Liam Brady got in touch with David Hay, the manager of Dunfermline, and arranged for me to go on loan.”

Bradley spent a season with the Scottish side, playing five times, before returning home to sign for Drogheda in 2005, where he had far greater success. 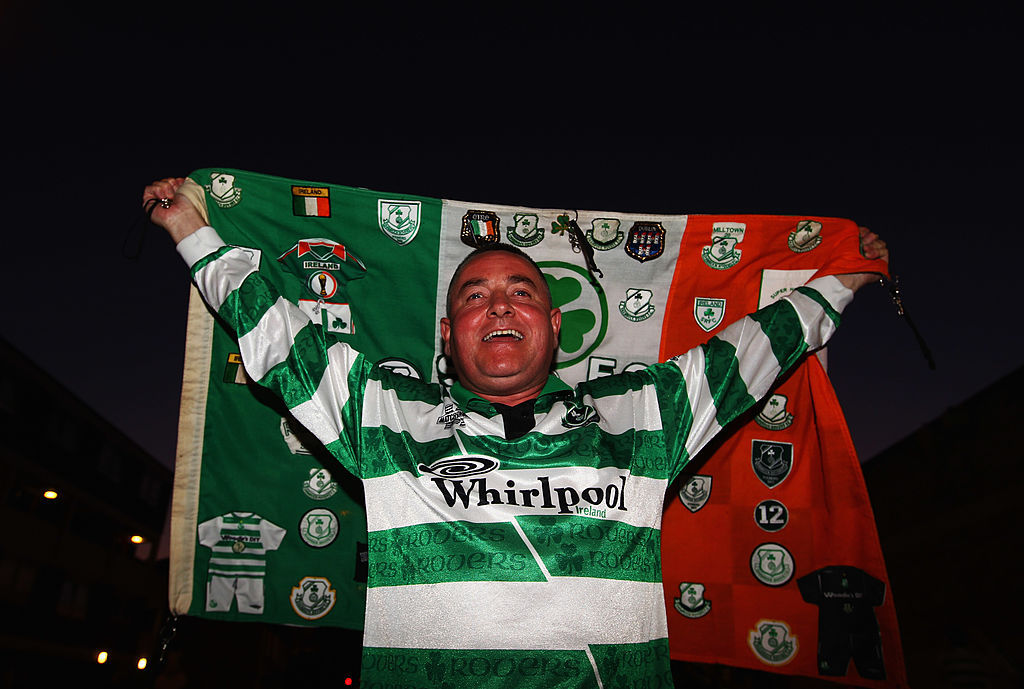 A Shamrock Rovers fan enjoys the atmosphere prior to the UEFA Europa League Group A match between Tottenham Hotspur and Shamrock Rovers at White Hart Lane on September 29, 2011 in London, England.

“I did well with Drogheda,” he says. “We won the FAI Cup in 2005 and the League of Ireland Premier Division two years later and also the All-Ireland Setanta Cup.”

Soon afterwards, Bradley got his first taste of life at Shamrock Rovers, in a true homecoming for him.

“I went back to Scotland for a brief spell with Falkirk, and then joined Shamrock Rovers in 2009. By then Rovers had moved to Tallaght Stadium, which is only a few hundred yards from where I grew up in Jobstown.” Rovers had lost their home in Glenmalure Park in Milltown when the previous owners of the club sold the ground for housing development in 1987, and they had spent 22 years renting various grounds around Dublin.

“I was signed by Michael O’Neill, the current Stoke City manager. We finished second in 2009, won the League in 2010, and then became the first League of Ireland club to play in the group stage of the Europa League.”

In spite of that success, the 2010 season was Bradley’s last at the club.

“Michael told me I was not in his plans, so I joined St. Patrick’s Athletic. I really enjoyed playing under Pete Mahon at St. Pat’s and we probably should have won the League in that first season. I was going to retire in 2012, but Pat Scully asked me to join Limerick, who were then in the first division, and I helped them win promotion to the Premier Division.”

2013 was Bradley’s final season as a player before retiring, his 30th birthday still a few years away. He quickly turned his attention to his next move, and his first port of call was former club Arsenal.

“A year before I retired, I sat down with my advisor Graham Barrett, who also played for Arsenal, and we had a serious chat. Graham knew that I had a great interest in coaching. I retired from playing at the age of 26, but I was always interested in the coaching side and had taken my first coaching course at the age of 21. I would take down notes from what managers said and even watching games on television I would make my own notes.

“I was Arsenal’s Irish scout for five years. I wasn’t sending over many young boys from Ireland, but was watching possible first-team players for [chief scout] Steve Rowley on video or in internationals.”

Bradley’s work with Arsenal came to an end in 2016, when he took the Rovers job. Five years on, he has won the League and FAI Cup, and helped restore the team to its status as one of the strongest in the country.

“In my first few years as Rovers manager, Dundalk and Cork City were the leading clubs. Signing Ronan Finn from Dundalk was a key move for me as prior to that it looked like we had trouble attracting top players to the club.

“We finished third behind Cork and Dundalk in 2017 and 2018, we were second to Dundalk in 2019 and then went unbeaten when winning the championship last season.” It was the club’s 18th league title, and the first time in 93 years that a team went through the entire season unbeaten; the last club to do so was also Rovers in 1924-25 and again 1926-27. “Our only defeat last year was in the FAI Cup final where we were beaten 4-2 by Dundalk. But we did have the satisfaction of winning the FAI Cup in 2019 when beating Dundalk on penalties.” That trophy was a record 25th for the club, but their first since 1987.

Rovers’ success has not gone unnoticed. Two of Bradley’s star signings departed in January – Player of the Year Jack Byrne to APOEL, and Aaron McEneff to Hearts.

“I had a feeling all along that we were going to lose Jack, who is now an Irish international. We couldn’t compete with the offer he got from APOEL, who were managed by Mick McCarthy when Jack moved to Cyprus. There was a lot of interest in Aaron from Championship clubs and from Scotland, and in the League of Ireland sometimes you have to sell to survive.

The club have been able to reinvest though, and Bradley has more transfer plans for the future too. 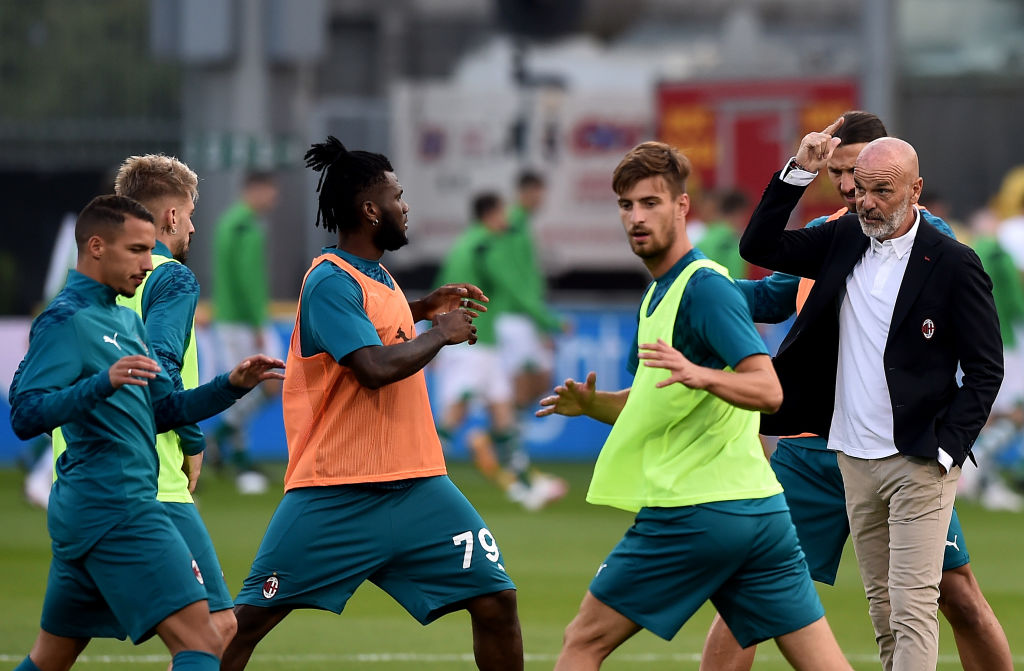 Stefano Pioli, Head Coach of AC Milan (R) looks on during the warm up prior to the UEFA Europa League second qualifying round match between Shamrock Rovers and AC Milan at Tallaght Stadium on September 17, 2020 in Tallaght, Ireland.

“I’m happy with the players we have brought in as replacements. Sean Gannon and Sean Hoare have joined us from Dundalk and Chris McCann, who came from Oldham Athletic, is an experienced player, who played for Burnley in the Premier League.

“Another player I am interested in is Richie Towell, currently with Salford City, but who previously played for Dundalk. I have always liked him as a player and if Richie becomes available in the summer we would certainly be interested in signing him.”

Nevertheless, retaining the title will be difficult for Rovers, with plenty of clubs looking to topple them.

“There is a fierce rivalry between ourselves and our north Dublin rivals Bohemians. That rivalry should intensify this season as we have signed Daniel Mandroiu from Bohs. Danny
is the third player that I have signed from Bohemians in my time as Rovers manager [after Dylan Watts and Roberto Lopes].

“I think our main rivals again this season will probably be Bohs and Dundalk. Both clubs have made some good signings and this will be Filippo Giovagnoli’s [Dundalk’s Italian-born manager] first full season in charge.”

Winning last season’s title means that Rovers will enter the Champions League qualifying rounds in the summer, but Europa League qualification is the real target.

“Dundalk got a great draw last year against a club from the Faroes. I don’t think I have seen such a kind draw for a League of Ireland club in a one-off game – I’d love to get a draw like that.” In contrast, Shamrock Rovers were drawn against Milan, losing 2-0 at home.

In many ways, the future is bright for Rovers. But they still need more supporters tuning in to watch them.

“It’s difficult, but it can be done,” says Bradley. “Last season supporters were not allowed to attend games due to COVID, and the FAI came up with a programme called ‘WatchLOI’, where fans could view a game on TV for just €5.

“Right now it looks like there won’t be any supporters allowed into grounds for the first half of the season, and I think we need to expand WatchLOI into a proper programme
– interview coaches and former players before the game and at half-time, and make it even more attractive.

“Looking further ahead to when the supporters are allowed back, we need to engage with schools and communities and we need to improve the facilities in the stadiums
if we want more young and indeed older people to see our games live.”

Whether or not the fans tune in to watch Bradley’s team, clubs in England and Scotland are sure to be keeping an eye on the promising young manager, who doesn’t turn 37 until November. November 19, to be precise; a significant date for more than one reason: “I hadn’t looked that far ahead, but yes – that’s the night we play Drogheda United at home in our final League game of the season. It would be nice to clinch title number 19 on the 19th, my birthday.”