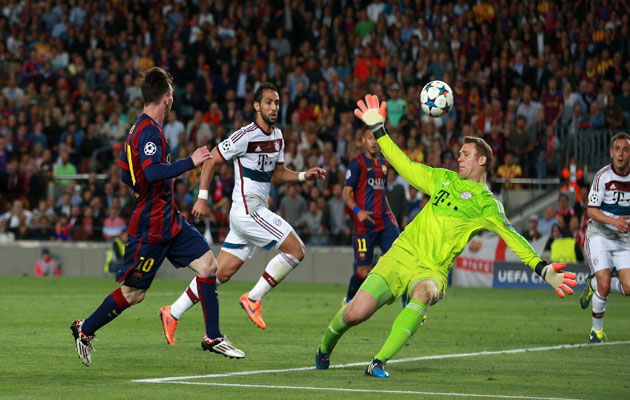 Doesn’t heading matter any more? You might have thought not after the eulogies bestwoed upon Lionel Messi, after his indubitably brilliant display at the Nou Camp for Barcelona against a bewildered Bayern Munich, whose defence could do nothing to combat his wonderfully elusive skills.

Even Graeme Souness, who was cited by Jamie Redknapp as someone who would not have let Messi perform such feats, almost at once went on record to say that he could not have coped with him.

A dissenting voice was that of the present Spurs manager and former Argentina international, Mauricio Pochettino, who had played with Diego Maradona and insisted he was the greatest of them all. As one who saw Maradona’s two amazing slaloms at the Azteca in 1986 against first England (best to forget the (Hand of God), then at the very same end against Belgium, I am well aware of Maradona’s great gifts.

Yet by an irony Maradona might even be held responsible for Messi’s own disappointing performance at the South Africa World Cup of 2010, when as a chaotic manager, kept him out on the left wing, possibly seeing him as a rival for his own fame.

While if the World Cup may be seen as the ultimate criterion, it must be said, that after a superb series of outstanding games and several astonishing goals, Messi subsided in the ultimate matches, not least in the final. After which he showed no pleasure in being awarded the golden Boot (which arguably should have gone to James Rodriguez) merely lamenting the three chances against Germany he had to score in the final.

Worth noting perhaps, the irony of the two goals he so superbly scored for Barca against Bayern and a powerless Manuel Neuer. The Germany keeper who should surely have been sent off early in the second half of the World Cup after that appalling mid-air assault on Argentine striker Gonzalo Higuain.

But Maradona, like Messi, has never been renowned for heading goals and for me Pele remains the greatest player of all time. He headed superb goals in two World Cup finals, which I was lucky enough to attend. That of 1958 in Sweden and 1970 in Mexico City, each time soaring above the defence to score. He was only 17 in the 1958 tournament and his first goal in the final was a marvel of courage and control in the thick of a bruising Swedish defence. Surely there has never been a player like him.

And the second player in my all time list remains Alfredo Di Stefano, gloriously versatile, endlessly active, a superb strategist, a fine finisher with foot or head, a consummate leader and inspiration of the Real Madrid team that won the first five European Cups.

An Argentine who won six caps as a youngster, before moving to Colombia for the money, and thence to Madrid. He never represented his country at a World Cup and didn’t turn out for his adopted country, Spain, in the 1962 World Cup in Chile, where there seemed scant chance that he could perform for the grand egoist Helenio Herrera. Injury was the excuse.