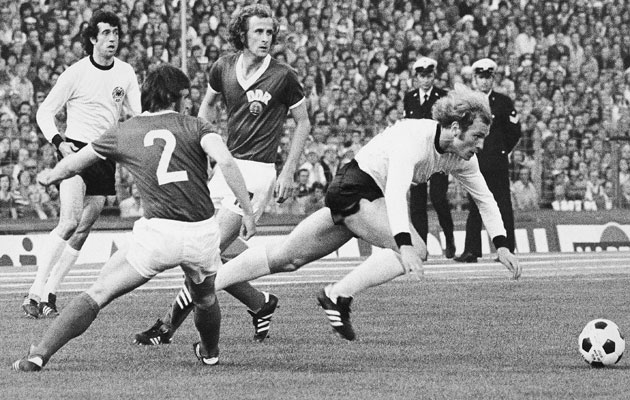 Precisely 25 years ago this weekend the Berlin Wall broke open. Among all the fall-out – personal, practical and political – that fracture also spelled the beginning of the end for East German sport.

But was not until September 12, 1990, that the Deutsches Demokratisches Republik played their last international football match. The occasion was a friendly against Belgium in Anderlecht’s Parc Astrid stadium in Brussels.

Originally the game was scheduled to be the German Democratic Republic’s opening qualifying match in the 1992 European Championship. The draw had been made on February 2, 1990, with the East Germans drawn in the same Group Five as Belgium, Luxembourg, Wales and West Germany.

Subsequently, on August 23, the East German parliament approved October 3 as the formal date of reunification. Hence the Belgium-East Germany game was a mere friendly on that September 12.

East Germany won 2-0. Both goals were scored by Matthias Sammer, now Bayern Munich’s sports director and by then already playing ‘out’ at Stuttgart. The teams, in front of a 12,000 crowd, were:

By that time East Germany’s own finest players, heroes from the 1974 World Cup, had retired. Centre-forward Joachim Streich scored a record 55 goals in 102 games, central defender Hans-Jurgen Dorner won 100 caps and goalkeeper Jurgen Croy 94. FIFA’s revisionist statisticians have even sliced back on those stats by excising from its own figures some Olympic team games.

The Ossi player whose name will live the longest in world football’s memory is Jurgen Sparwasser. He was the man who scored GDR’s lone winning goal in Hamburg against hosts West German in the 1974 World Cup finals, the only time the states met at senior international level.

That remains the pinnacle of achievement for East Germany’s footballers before they faded out in the second group stage while the Wessis, of course, went on to win the World Cup.

In 1956, 1960 and 1964 the two states had sent a unified team to the Olympic Games though, on the latter occasion, it was an East German side who competed in Tokyo: they had won a play-off against the West for the right to go on and take the bronze medal.

East Germany competed independently at the Games thereafter: the footballers won bronze in Munich in 1972, silver in 1980 in Moscow and gold inbetween in Montreal on July 31, 1976.

A 71,617 crowd in the Olympic Stadium saw the East Germans beat Poland 3-1. Poland fielded most of the stars who had finished third in the World Cup two years earlier including keeper Jan Tomaszewski, centre back Wladyslaw Zmuda, playmaker Kaziu Deyna and strikers Grzegorz Lato and Andrzej Szarmach.

Coach was Georg Buschner, who had taken East Germany to the World Cup finals, and the goals fell to Hartmut Schade (seventh minute), Martin Hoffmann (14) and Reinhard Hafner (84). Lato (59) responded for Poland.

This was East Germany’s only international success by sharp contrast with the gold medals harvested down the years by the state’s athletes and swimmers. But then, even the East German’s sports chemists could not come up with a drug to help a footballer pass more accurately, shoot more powerfully or read a game more intelligently.

Some 14 years after that Olympic triumph and East Germany no longer existed in any form, let alone football.

West Germany’s old heroes from the 1950s to the 1980s are still lionised but the likes of Streich, Dorner and Croy and earlier stars such as Peter Ducke, Jurgen Noldner, Hans-Jurgen Kreische and Otto Frassdorf have been all but forgotten.

A unified Germany picked up some of East Germany’s finest players but clubs which had dominated the GDR league, such as last champions Hansa Rostock, Magdeburg, Dynamo Berlin (the ‘Stasi club’), Dynamo Dresden and Lokomotive Leipzig crashed down through the Bundesliga despite being handed an egalitarian start.

The odd echo of football history lingers on. But only just. Toni Kroos was the sole East Germany-born member of the German squad which won the World Cup in Brazil this past summer.

Kroos was nine months old on Unification Day . . . hence even he had not been born on the day The Wall came down.