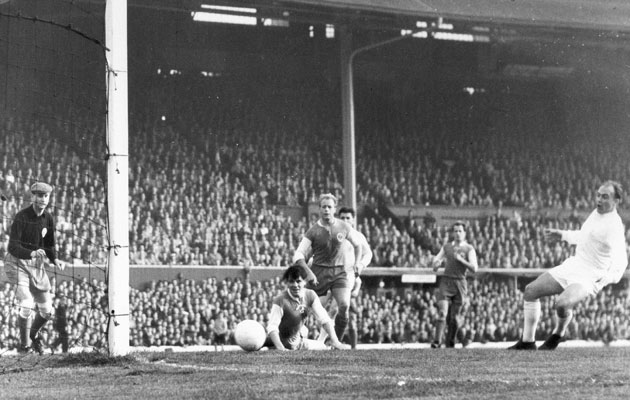 Alfredo Di Stefano, who has died in Madrid aged 88 after a cardiac arrest, remains the greatest footballer of all time for many observers. Not only was he supremely talented as a centre-forward who viewed the entire pitch as his domain, but his significance to the modern game is without parallel.

Coincidentally Santiago Bernabeu, as president the other great architect of Real Madrid, also died while a World Cup was being played out in South America, in his case in Argentina in 1978.

Di Stefano, born in Barracas, Buenos Aires, on July 4, 1926, played national team football for his native Argentina and then later for Spain.

He was a member of Spain’s squad at the 1962 World Cup in Chile but did not play because of sciatica [Reports that he also played for Colombia – and thus three countries – are erroneous; he played for a Colombian League XI while with Millonarios of Bogota in the early 1950s but not for the national team].

Di Stefano began with his father’s old club, River Plate, though his boyhood hero was Independiente’s Paraguyan centre-forward Arsenio Erico. River sent him on loan to Huracan then recalled him after Adolfo Pedernera – leader of their legendary Maquina [Machine] forward line, decamped to Colombia.

River fans gave Di Stefano the Saeta Rubia [Blond Arrow] nickname which stayed with him throughout his career. He scored 53 goals in 73 games for River up until the infamous players’ strike in Argentina in 1950. The clubs decided to break the strike and force the players back into action by fulfilling fixtures with the youth teams.

However clubs in a new breakaway Colombian professional league took advantage of their independence beyond FIFA to lure the players away. Pedernera came back to persuade Di Stefano and a host of other top Argentinian players to join him in a short-lived footballing El Dorado.

FIFA eventually brokered a peace deal and Millonarios toured Europe to capitalise financially on their fame. It was when their ‘Blue Ballet’ played in a tournament in Madrid to mark Real’s 50th anniversary that Bernabeu decided Di Stefano was the player of his dreams and ambitions.

But Madrid had competition . . . from Barcelona who had already snatched the great Hungarian, Ladislav Kubala, from their grasp. Bernabeu resolved not to be beaten again. So while Barcelona bought Di Stefano from his original club, River Plate, Madrid bought him from Millonarios.

The Spanish sports ministry ruled, in a judgment of Solomon, that he should play two alternate seasons for each club. After a modest first month, Barcelona told Madrid they were welcome to him in return for the $27,000 the Catalans had paid River Plate. With the hindsight of more than 60 years, it can be argued that the day he arrived – September 23, 1953 – was the day that changed football.

Two years later the European Champions Cup was launched at the prompting not of the fledgling and uninterested UEFA but by the French newspaper L’Equipe. The advent of floodlighting and the jet engine had opened up a revolutionary potential for international midweek club football. 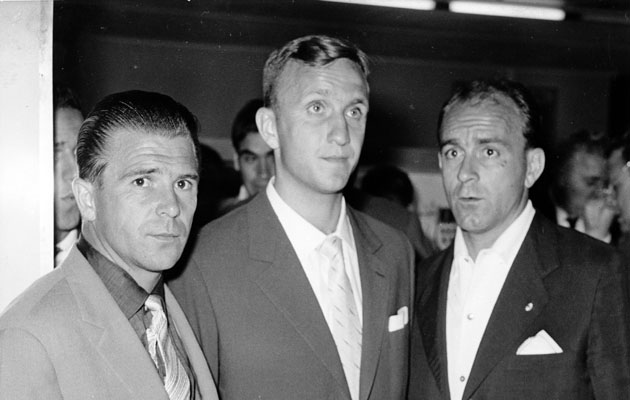 Madrid won the European Cup for the first five years in a row with a dramatic style and swagger every club and player dreamed of emulating. Di Stefano scored in every final culminating in the legendary 7-3 demolition of Eintracht Frankfurt at Hampden Park, Glasgow when both he and Ferenc Puskas scored hat-tricks.

No other player so effectively combined individual expertise with an all-embracing ability to organise a team to play to his command. He was ‘total soccer’ personified before the term had been invented. The British sports journalist, Brian Glanville, described him as “the King of the European Cup.”

The Di Stefano-fired success of Madrid and the European Cup – the only label it ever needed – fuelled the mixture which inspired Horst Dassler and Joao Havelange to turn the World Cup into a cash machine and set an example greedily pursued by every other sport.

Di Stefano, with Madrid, won five European Cups, eight Spanish league titles and one cup, one World Club Cup, two awards as European footballer of the year and was five times Spain’s top scorer. He was European Footballer of the Year in 1957 and 1959 and held, for long years after his retirement, the record of 49 European Cup goals.

He played for the Rest of the World against England in the Football Association’s centenary match in 1963 and received a host of civil and sporting awards around the world.

Utimately, in 2000 he was appointed honorary president of Real Madrid, a role he held with pride until today.

Real Madrid defeated Eintracht Frankfurt 7-3 in the 1960 European Cup final – a game regarded by many as the greatest club performance of all-time.