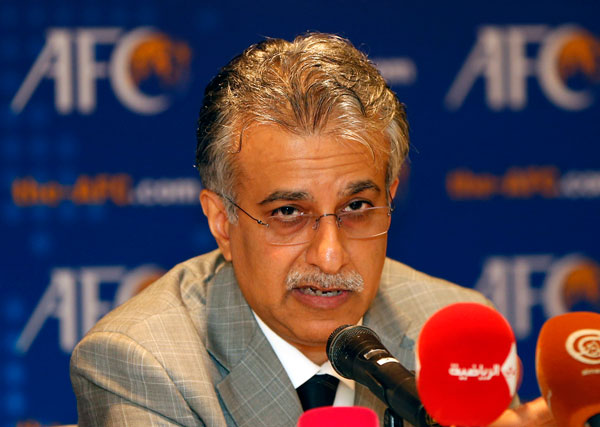 The political wrangle focuses on Asian Football Confederation statutes which separate the position of FIFA vice-president from the AFC leadership.

Prince Ali was elected as Asia’s FIFA vice-president in 2011, a position he maintained when Sheikh Salman bin Ebrahim Al Khalifa from Bahrain was voted in as new AFC president last year.

Since then Sheikh Salman has fought doggedly to convert the FIFA vice-presidency into an automatic right for the AFC president.

AFC Congress rejected such a proposal overwhelmingly last year. Then, last month, Sheikh Salman was reportedly furious when his attempt to raise suppport from FIFA’s executive committee was dismissed in peremptory fashion.

FIFA’s directors insisted that Asia’s representation was a matter only for the AFC.

Asian football feels under-represented on the FIFA exco in any case with the one vice-president and three ‘ordinary’ members, chosen on a regional basis. The trio are Sheikh Salman, controversial and long-serving Worawi Makudi of Thailand plus Zhang Jilong of China.

Additionally co-opted on to the FIFA exco as a representative of women’s football is Asia’s Australian lawyer Moya Dodd.

Zhang, interim AFC president after the scandal-hit exit of Qatar’s Mohamed Bin Hammam, was co-opted back into the FIFA exco by the AFC last year after Sri Lanka’s Vernon Manilal Fernando incurred a life ban from the world federation’ ethics committee.

Japan’s Kohzo Tashima has already declared an interest in running next year for this AFC slot on the FIFA exco.

However, the main confrontation within the AFC hierarchy is the issue of the FIFA vice-presidency.

Sheikh Salman has been gathering support for a change in statutes which, if carried by AFC Congress in Sao Paulo in June, would threaten Prince Ali’s exit as FIFA vice-president after only one four-year term.

Prince Ali has set out his opposition to Sheikh Salman’s manoeuvres in his letter to the AFC member associations.

He said he was “truly surprised” that a proposal kicked out by AFC Congress last year had been revived so “vigorousy” by Sheikh Salman.

Prince Ali added: “It is unfortunate that the direction taken by the AFC president and other AFC officials is one driven purely by politics instead of focusing our energies and valuable time to improving the game in Asia.”

The letter left no doubt about the confrontation now under way.

Prince Ali said: “It is regrettable that the AFC president has spent so much time and energy over the past few days . . . lobbying heavily for this proposal instead of working hand in hand for the development of football in Asia.”

He set out his own efforts on behalf of the AFC and Asian football in general over the last three years and explained why he believed the AFC presidency and FIFA vice-presidency should not be unified.

Prince Ali said: “I believe there is wisdom in maintaining the two positions separate. It allows the FIFA vice-president to focus on Asian football issues in FIFA while the AFC president focuses on addressing football challenges in Asia and strengthening football development which is a very big task.”

The FIFA exco headed by president Sepp Blatter includes 24 members plus two co-opted women members. The eight vice-presidencies are split three from Europe plus one each from Africa, Asia, Central and North America, Oceania and South America.