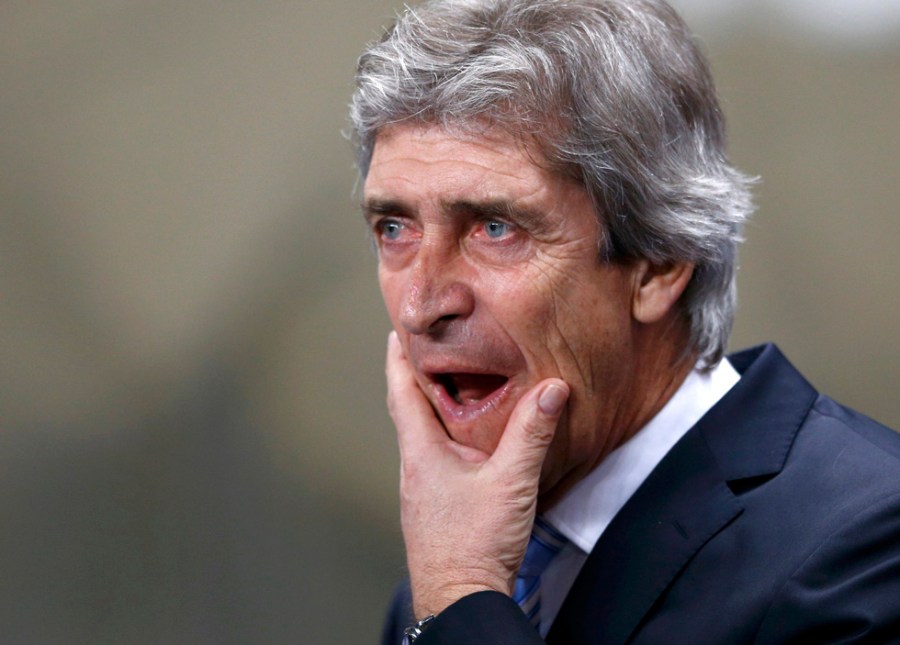 The Case of the Moaning Managers. With the implicit theme of, not me, Guv. Manuel Pellegrini, who until his Manchester City team had been well beaten by Barcelona had seemed such a calm and rational fellow.

The Chilean came out with a mindless diatribe, blaming a perfectly competent Swedish referee, Jonas Eriksson, for City’s well merited defeat, plumbing the depths of absurdity when he asserted that Eriksson was intent on atoning for wrong decisions he had given against Barcelona in a previous European Cup tie against Milan.

As for Arsene Wenger, he protested that Nicola Rizzoli, the highly experienced Italian referee, had been wrong to give the penalty against Arsenal and by the same token wrong to send off his goalkeeper, Wojciech Szczesny.

Wenger in front of his dug out mimicked with a gesture that this had been a dive, later making the extraordinary claim that “We are not used to it in England.” Eh? I seem to recall a dramatic dive by Wayne Rooney, which largely cost the Gunners the end of that 49 match unbeaten run at Old Trafford. A run which, to be blunt, (ask Harry Redknapp) quite early in the previous season at Highbury when a goal behind against Harry’s Portsmouth, Pires, dived blatantly in the box procuring a penalty from which the Gunners equalised.

As for Pellegrini, he ranted, “The referee decided the game. Before the penalty it was a foul on Navas when he was three metres from the play so he could see it. It was not a penalty. It was outside the box.

“He did not have any control of the game. He favoured Barcelona from the beginning to the end. I do not think it was a good idea to put a referee from Sweden in charge….. There is more important football in Europe than Sweden.”

Then what of that admirable Swedish referee, Anders Frisk?

Pellegrini insisted that the foul on Lionel Messi took place just outside the box. In fact the illicit tackle probably began there but continued into the penalty area itself. The true significance of this event was that Pellegrini should have picked the one paced Martin Demichelis at all, than Lescott, who came on far too late in the game.

But Pellegrini seems to have a mild obsession with Demichelis whom he had previously and disastrously deployed against Chelsea in central midfield.

And when push comes to shove, Pellegrini might be reminded that a late goal by Cesc Fabregas was disallowed for a most dubious offside decision.

But then, what of Wenger and Mesut Ozil? Plainly tired and off form in recent weeks after his bright beginning, culpable of missing a penalty in the previous Euro game against Marseille, he was a risky choice to take that penalty, even if Arsenal’s regular spot kicker was missing. And after he had missed it, Wenger himself noted he was dejected.

In such circumstances it was surely a folly to keep him on as Wenger did.

Till Ozil missed that penalty Arsenal emphatically had the wind in their sails and though it is unlikely they could have kept up their frenetic early pace throughout, it is quite feasible that they would at least have escaped defeat. As for Pellegrini, that outburst has left him a severely and surprisingly diminished figure.

Subsequently and predictably, he backtracked and retracted, though the damage to a previously impeccable image was done. Wenger on the same Saturday was an altogether happier man after one saw his Arsenal brush aside a Sunderland team which scarcely competed in a pitifully one sided first half.

It was a day of fervent celebration of Dennis Bergkamp whose statue was unveiled outside the stand before cheering thousands of fans with a still greater reception awaiting Bergkamp when at half time he came out on to the pitch for an interview which was shown on the huge screen. He spoke warmly about his years with Arsenal.

It was not in fact Wenger who signed him from Inter when he came in 1995 ahead of Wenger’s arrival in 1996, but Bruce Rioch, abruptly dismissed, who deserves the credit.

At Inter, Bergkamp once told me he had enjoyed the life in Milan, but wasn’t happy at being used as a spearhead. Somewhat ironically perhaps this was exactly how Wenger would deploy him in that dreary Cardiff Cup final of 2005 in the absence of Thierry Henry, where a disconsolate Bergkamp looked such a fish out of water. Arsenal, dismally defensive, scrapped through on penalties which may perhaps have been the un-ambitious plan. It was his fourth FA Cup medal, with three Championship medals besides.

Bergkamp will be much better remembered for his supreme ball playing skills, marvellously displayed in a goal he scored at Newcastle (see below) with conjury which almost eluded the naked eye.

Nicknamed “The Iceman,” He played 79 games for Holland, scoring 37 goals. Now back at his original club Ajax, he coaches the juniors, putting, as he told us from the field, special emphasis on first touch football; and who better to show them that?