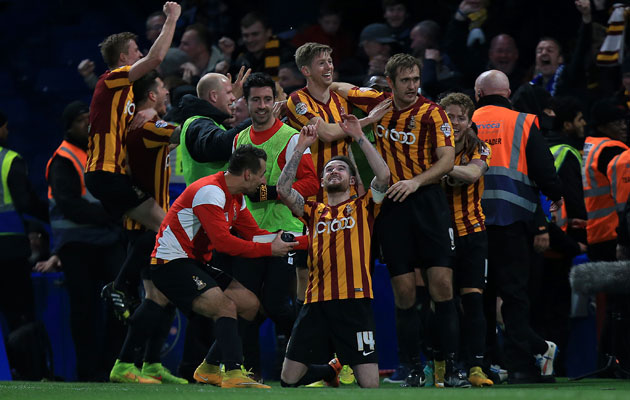 Bradford City’s romantic and sensational victory at Chelsea restores a large measure of prestige to an FA Cup which has been menaced and diminished for far too long.

This was giant killing at its most dramatic and claims were properly made for its being the most remarkable of all. That’s as maybe. Walsall’s conquest of then mighty Arsenal in 1933 might surely be a competitor, and Hereford United’s elimination of Newcastle United much later could be competitors.

But that a Bradford City team which cost a mere and minuscule £7,500 as against the almost £200 million which even a Chelsea side which omitted several first choices almost defied belief.

The whole of that exiguous sum was shelled out for the 6 foot 4 inch 27-year-old striker James Hanson, who ironically enough was born in Bradford, but found his way to City from humble Non-League Guiseley.

Every other resilient member of the team at Stamford Bridge came on a free transfer, bar 6 foot 3 inch 31-year-old fellow striker Jon Stead on loan from his local club Huddersfield Town; they had had to buy him back from Bristol City. I remember admiring him in his earlier Huddersfield days and if my memory serves me, recall seeing him viciously knocked out by a flailing elbow on the QPR ground by the Fulham (they were briefly playing their home games there) centre back.

Further ironies. Two of the Bradford team, both of whom did impressively well, were once on Chelsea’s roster, the much travelled midfield 22-year-old Billy Knott, born on Canvey Island but recruited from distant Sunderland, and the Portuguese winger Felipe Morais, amiably greeted in his native language by Jose Mourinho in the tunnel before the game, and scorer of the second City goal.

The beauty of Bradford’s success was that it was achieved not by harsh methods, not by mere lone balls, but by clever, co-ordinated football. Huge credit to their manager Phil Parkinson, whose tactics – attacking down the wings, hitting diagonal balls to the two trikers, Stead, whose fizzing left footer brought City back into the game, and Hanson – enabling the dynamic Knott to snap up second balls, pressing only in their own half, eschewing risk.

He had, of course, already taken the club to a League Cup final, humiliating far bigger, richer clubs along the way. What Bradford City proved at Chelsea was that despite the pessimists, with even Roy Hodgson predicting that it would take years for a truly successful England team and its players to develop, despite the latest grandiose but uninspiring new FA plan to transform the game, the talent is still there, even when, as in the case of so many of the City players, it is somehow allowed to slip away to less fashionable clubs. 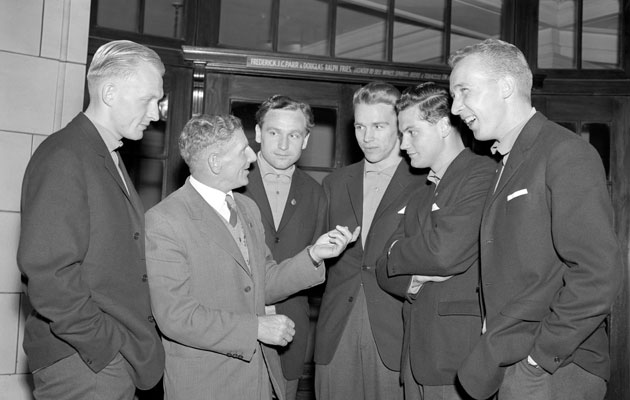 George Raynor, manager of the Sweden, talking to his forward line in 1950

Ashley Hyne’s George Raynor: The Greatest Coach England Never Had (The History Press) deserves to be widely read but won’t be.

Part eulogy, part apologia, it chronicles in abundant and sometimes excessive detail a talented and endearing figure whom I came to know well and greatly to like when in the football season of 1954-55 he was managing the Lazio club, and I was in Rome working inter alia for its leading daily, the Corriere Dello Sport.

By a remarkable stroke of fate, Roma, the great rival club, was being managed by another Englishman, Jesse Carver. An utter contrast in character, Carver, the Liverpudlian, beloved by his players but a closed and elusive person, Raynor open, ebullient and generous.

In his encomium, Hyne curiously fails to allude to Raynor’s endearing family life; his wife was kind and extremely hospital. Carver’s wife, by contrast, would often find a visit to the dressmaker caused her to cancel one’s invitation. “The number of times I’ve heard about the dressmaker,” Raynor would say.

As he would admit, “I was only a second class player.” Hyne erroneously puts Carver, a centre half of near England status with Newcastle and Blackburn, in the same category. Yorkshire born, at the little village of Hoyland, George found himself playing for a wartime Aldershot team which included half the England side as guest players. Fortune found him when he was posted to Iraq and there successfully coached the national team.

Alerting Stanley Rous, the FA’s powerful secretary of his achievements, he found himself on coming home engaged as coach to Sweden’s international team. Swiftly overcoming scepticism, he forged a dazzling side which won the 1948 Olympic title in London.

Rebuilt it when pillaged by Italian clubs to reach and contest the 1950 World Cup in Brazil, was brought from Rome by Carver to assist him at the Third Division South Coventry, found life there hard when Carver left him to return to Italy. Took over in Sweden again and typically inspired, forced a 2-2 draw in Budapest in 1953 against a Hungary team which two weeks later thrashed England 6-3 at Wembley.

And yes, he did tell me that he’d promised his team that should they win, he’d paint the moustache on Stalin’s statue red?

Hyne contests that Raynor should have succeeded Walter Winterbottom in 1962 as England manager, dismissive of Alf Ramsey’s reign. Criticise him as we all at times did, Alf won the 1966 World Cup. Might Raynor have done as much? Who can say?