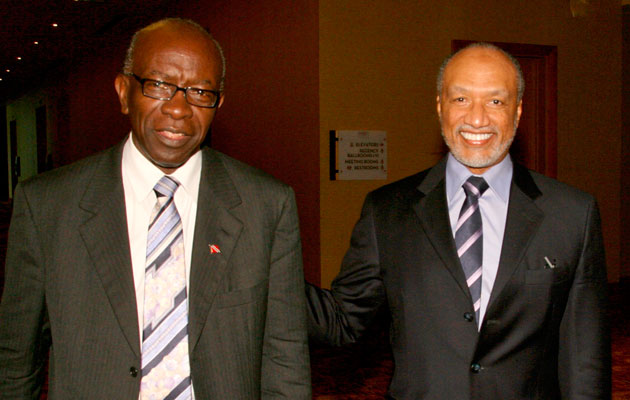 The devastating revelations by my colleagues on the Sunday Times simply in effect confirm what has been well enough known all along.

That Qatar bought the 2022 World Cup against all logic, common sense and propriety. A tiny though disproportionately rich state, thanks to its deposits of oil and gas, with absolutely no football status, history or relevance, subject to a summer climate which can rise to 50 degrees. How else could Qatar have obtained a World Cup other than by bribing its way to success?

We now know just how and where millions of dollars were splashed around the football world by Bin Hammam. The idea that as the Qatar football authorities want us to believe that he had nothing to do with them, when he had presided over them till so recently and for so long, is risible.

Yet perhaps we should get things into historic perspective. It has taken 40 long, malodours years for the dirt to hit the fan, but corruption in FIFA has been rife, virtually axiomatic, ever since the egregious Joao Havelange bought his way to the Presidency of FIFA in Frankfurt in 1974. Bought it with the funds acquired to be euphemistic from the Brazilian Football Confederation, used to bring African delegates to Frankfurt to vote out the reigning President, Stanley Rous.

But those forty dire years elicit the words of an 18th century English political philosopher that for evil to triumph, it is enough for good men to do nothing. And nothing indeed was done to end or obstruct the appalling reign of Havelange from 1974 to 1998; when Sepp Blatter, against all forecasts and expectations, slid into his mentor’s seat when the Swede Lennart Johansson seemed home and dry. You could perhaps understand though hardly sympathise with the Afro-Asian and Concacaf members who voted for Havelange because – rather like Blatter now – he kept them sweet with his subsidies. But for European and South American nations to do nothing to obstruct him was morally deplorable.

So Havelange was enabled to bloat the World Cup from 16 teams into a clumsy, and unmanageable 24. A number to be bloated again by Blatter into the present 32 in a tournament that now drags on wearyingly for players, like both teams in the drawn out Final of 1994 in Los Angeles between Brazil and Italy.

A significant depressing picture recurs to me. Of Harry Cavan, a lickspittle Ulster representative, whose sycophantic eulogy for Havelange on his 75th birthday at the FIFA conference curled the toes, reclining on his bed in the official FIFA deluxe hotel in Mexico City and saying what a good life this was. Not least for a mediocre administrator who by then was even out of office.

Blatter himself is not involved in these shocking revelations, but one of the reported most rewarded beneficiaries of Bin Hammam’s largesse, Trinidad’s notorious Jack Warner, emphatically is: to the reported tune of $1.6 million. The main man at Concacaf, assiduously courted by Blatter, full chapter and verse provided in David Yallop’s alarming book, How They Stole The Game. There you will find correspondence which shows Blatter seemingly prepared to give Warner almost anything he greedily wanted, plainly coveting the Concacaf votes Warner controlled.

It is still embarrassing to recall how Warner, ludicrously described in some English newspapers as a power broker, was courted both by Prime Minister Cameron, who received him in 10 Downing Street, and even by Prince William, innocently lured into seeking favours never given. In the event as we know Warner didn’t vote for England’s World Cup bid. Indeed only one country bar England themselves did.

There have been rumours that were FIFA to take the World Cup away from Qatar as they surely should, the financial consequences for them could be such as to provoke its disintegration. This seems to me the only way the international game can be cleansed for FIFA is an Augean Stables which will never find a Hercules to cleanse it. Meanwhile what of UEFA’s chief Michel PLatini, as inept and disastrous as administrator as he was great as a footballer. That Platini not only was in favour of Qatar hosting the summer tournament but subsequently, Blatter like (even he admits the original choice was wrong) spoke in favour of staging it there in winter, passes credulity. The more so as there was no reason to doubt that Platini acted in all unalloyed sincerity. Till now, alarmingly.

There is no way or hope of reforming FIFA. It was one repeats morally doomed from the moment Havelange ousted Rous. But after the outrages of the Qatar affair, what of 2018 and the appointment of Russia, where racism is commonplace in football and blatantly ignored by a FIFA whose alleged policy of eliminating racism from football is ridiculed by Russia’s choice? Et tu, Platini!