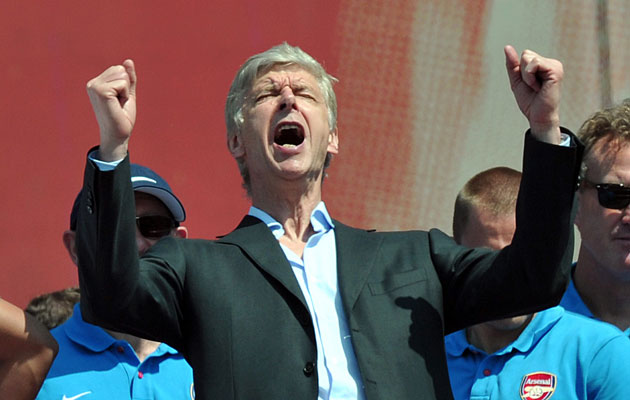 Well, Arsene Wenger has got his wish. Arsenal have drawn his old club in the first knockout round of the so-called Champions League (surely a flagrant breach of the trades description act).

Wenger must be doubly delighted. First for sentimental reasons. He had seven distinguished years as as a bright young manager at Monaco. Second, more pragmatically, because Monaco are hardly a power in Europe. Well down the French league table, they have succeeded so far in Europe with  series of narrow victories. Although by the same token they have given relatively few goals away.

They scored a mere four goals in the group stages and rely heavily on the ever unpredictable Dimitar Berbatov, who can do remarkable things with the ball, score astonishing goals, but at other times as they know at Spurs, Manchester United and Fulham, fade into anonymity.

But the quick and clever Portuguese midfielder Joao Moutinho, who figured in his team’s abortive World Cup campaign, can be a threat. In defence, former Chelsea stalwart Ricardo Carvalho soldiers on.

Arsenal then have at long last high hopes of emerging from the last 16. By the times these two teams meet, Theo Walcott should be up and literally running and Aaron Ramsey, injured, just as he was running into such dynamic form in Istanbul, will presumably be operative again. While there are plainly hopes that Mesut Ozil and Jack Wilshere will be fit again.

Meanwhile the acquisition of Alexis Sanchez has surely been one of Wenger’s greatest coups. While the loss to Real Madrid of James Rodriguez, arguably the outstanding player of the 2014 Wold Cup, has torn the heart out of the Monaco attack.

One doubts that Arsenal, though strong favourites in this round, pose a strong challenge to the title. Much is going to depend on the erratic form of the giant Per Mertesacker in central defence. He can, when facing the ball – as opposed to turning – look so dominant. Yet as the Gunners former centre-forward Alan Smith so shrewdly pointed out, he can also at times be oddly vulnerable, wandering out of position, even missing balls in the air. What he so clearly is not is the Tony Adams figure, the captain Arsenal so badly need.

Chelsea find themselves drawn against Paris Saint Germain, whom they eliminated last season, though not without difficulty, losing in Paris, but winning at home when Chelsea were without their talismanic striker Zlatan Ibrahimovic. He will be a menace to the Chelsea central defence, in which veteran John Terry, a true captain, remains impressively dominant, though I am not sure about his partner Gary Cahill: subject at times to expensive errors.

But the attack, recruited regardless of expense, can be formidable, if erratic. In the qualifying group both Schalke and humble Maribor held them to a draw. And defeats such as the 1-0 loss at Newcastle, indicate that the old, old Chelsea syndrome of beating the best but losing to their inferiors is not lost in the mists of history.

Ye the splendid talent available should enable them to come through this round. Eden Hazard looks irrepressible, Diego Costa is scoring goals, Nemanja Matic has given more power to the midfield, where Cesc Fabregas has added guile and opportunism.

Yet it is hard to see beyond Real Madrid as favourites, to retain their title, which would constitute a new record. Schalke should give them little trouble. Cristiano Ronaldo has been more prolific than ever, James Rodriguez has added his flair to midfield, where Toni Kroos has been another gifted arrival. A somewhat shaky start to the season has been left well behind.

The eternal rivals Barcelona were recently beaten comfortably 3-1. Barca must now play Manchester City, who though well below strength, won well in Rome. But any hope they may have must rest on the return from injury of Sergio Aguero, who missed the Roma game, but this season had been in dazzling penetrative form.

I’m not sure about Barcelona: I’ve an impression that the parts are greater than the whole. Buying Luis Suarez for £75 million may have been an excessive indulgence. Where is the old tiki-taka now? An embarrassment of riches?

Lionel Messi is still a supreme goalscorer, but there is also the splendidly little elusive Neymar too. Can they successfully co-exist? Recent results suggest it isn’t too easy.

Bayern Munich have Arjen Robben who seems to get better, more incisive, year by year, so capable of surging in from the right flank on to that lethal left foot against any opposition. And now there is the penetrative Robert Lewandowski and Franck Ribery on the wing. Shakhtar should be no problem.