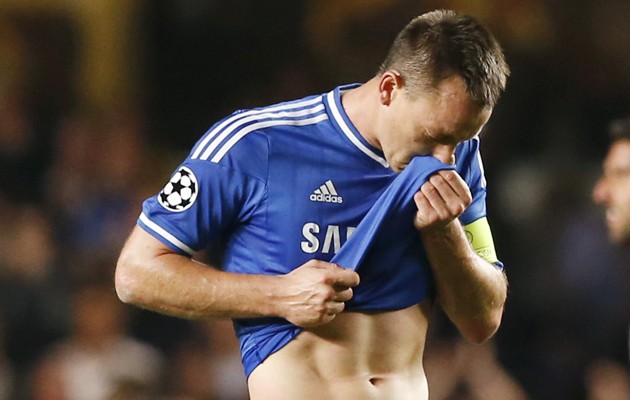 Atletico Madrid, whether or not they win the European Cup and-or the Spanish League, have surely struck a glorious blow for football democracy to getting as far as they so far have.

Of keeping apace and even more with the enormously wealthier city rivals, Real. Of humiliating a Chelsea team bankrolled by the billionaire oligarch Roman Abramovich. The whole Atletico team which triumphed at Stamford Bridge cost a mere £20.9 million. Chelsea’s cost an astronomical £186 million.

Mind you, and this is something no one seems to have stressed. Atletico’s most costly player of all David Villa the Spanish international striker bought from Barcelona for £21 million last summer, with a proposed extra £5 million payable should he stay at Atletico for three years, didn’t even get off the bench.

Yet on the same Stamford Bridge ground so soon afterwards, Chelsea’s exuberant youth team were beating a vibrant Fulham side 5-3 to take the national title; as they so frequently do. And what you may ask will happen to those talented Chelsea youngsters such as Brown, such a bright, elusive and intelligent attacker?

Adi Viveash, the Chelsea Under-18 manager, is full of buoyant optimism. He hopes that with so many Chelsea stars absent at the World Cup finals, “The young players will get a chance to show Mourinho what they can do. If they show him and he likes what he sees, that can open up different routes.”

All too probably to loans to a different club. The fact is that Chelsea’s expensive youth policy has for so many years been a dead end. The current team has included only one homegrown talent, albeit a vitally important one, in the captain John Terry.

Otherwise for all the great induction of young talent, one can think of just a single product of the plan who has got anywhere at all that isn’t at Stamford Bridge despite a highly promising first team beginning there. This is the playmaking Josh McEachran allowed to go on loan from one club to another, including Bolton Wanderers and more recently and successfully to Wigan.

Chelsea hadn’t the patience to persevere with him. Abramovich’s colossal wealth allowed the much easier option of buying ready made. You have to go way back to the glittering days of Alan Hudson and Peter Osgood in the 1970s to find major stars developed and deployed by Chelsea themselves.

Fulham, who gave the Chelsea juniors such a splendid run for their money, and ran them so close at The Bridge – where the gloriously quick, intelligent and inventive Roberts hit a post late on with what could have been a decisive goal, haven’t the colossal financial resources of Chelsea and are therefore more likely to give youth its fling, albeit, alas, in the so-called Championship.

Not that Fulham themselves have been immune from spendthrift activity. The £12 million acquisition if that be the word of the Greek international centre forward from Olimpiakos, Mitroglou has been a cosmic disaster.

Cripplingly injured when he arrived – I still don’t know for sure whether he was given a medical test, and if so, what it would have revealed – he has proved a dismal waste of money. Will he come suddenly to glorious life in the lower League? Would any other club be ready to risk that kind of money now? We shall have to see.

Meanwhile, the knee jerk managerial policy of the club has surely contributed to its downfall. Holland’s Jol was certainly a busted flush well before they’d got rid of him, but the recruitment of the supposedly new Messiah in Felix Magath has proved anything but fruitful, whatever his successes with Bundesliga clubs.

In that disastrous final game at Stoke, it made no sense at all to use the towering young centre back Burn at right back, where, he was predictably, embarrassingly and disastrously taken to the cleaners by Stoke’s quick winger, Assaidi.

Across London, Arsene Wenger joined his team’s somewhat superfluous lap of so-called appreciation after the laborious win against West Bromwich solidified their fourth place position. The opposing WBA manager, Mel, somewhat sourly observed that in Spain, Wenger would have been sacked. In Italy too after those shocking defeats at Manchester City, Liverpool and Chelsea.

True the loss for so long of the dynamic Walcott, and the highly influential Aaron Ramsey badly affected the team’s prospects, but such defeats cannot be written off on those grounds. At the very least it seems to me Wenger if, as it seems, he does stay, needs a forceful and pragmatic number two, not least to help him in the transfer market where even the vastly expensive acquisition of Ozil seemed a panic buy.

The FA President Greg Dyke, visionary or boring blowhard, according to your preference, now has a grandiose schemes for inserting an extra division in the League, and vastly increasing the coaching of the very young.

One hears an outcry against the uncoached profusion of one-footed players, but then one thinks of Ferenc Puskas. “With a left foot like that,” Danny Blanchflower once said to me, “you don’t need a right foot.”

And what of the deadly left foot of Arjen Robben, playing on the Bayern right?

Besides, merely increasing the number of coaches begs the question of their competence.