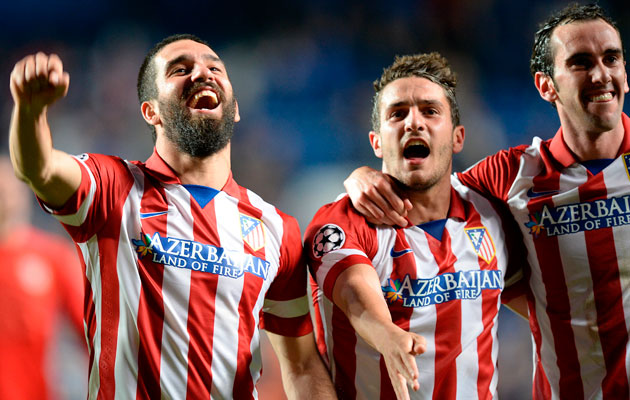 Have Atletico Madrid struck a blow for democracy in football?

Giving at least some indication that even in these times of multi million pound “super” clubs, there is still space and opportunity for the less wealthy to break through and triumph? In a word, to show that money isn’t everything.

Atletico beat Chelsea fair and square at Stamford Bridge even if helped by the confused tactics of the supposedly “special” Jose Mourinho. Who, only days earlier, had comprehensively outwitted Liverpool and their young manager Brendan Rogers with a 2-0 victory against the odds, and the balance of play, at Anfield.

Too clever by half you might say of Mourinho’s tactics against Atletico. Who could blame Eden Hazard, plainly not fully fit in this game, when he said afterwards, boldly. “Chelsea aren’t set up to play football. Chelsea are set up to counter attack.”

Chelsea, like Real Madrid, who so comprehensively thrashed Bayern Munich on their own ground the previous day, have a team which cost millions.

You may still wonder what possessed Mourinho to start a fullback in Azpilicueta out on the right flank. On the face of it, surely the sign of excessive caution in a game which called for the home team to go out for a win.

Oscar, admittedly out for form of late, didn’t for all his talents get on at all. The quick, incisive German attacker Schurrle was deployed only after 77 minutes.

All this against an Atletico team which cost peanuts by comparison with Chelsea. Real Madrid, even Bayern Munich.

Cleverly put together and managed by Diego Simeone, once David Beckham’s Nemesis in the 1998 Wold Cup. Its refulgent star, Diego Costa, whom Chelsea reportedly want to buy, now in a sustained period of grace after years of seeming indiscipline in which he was in and out of the club.

The club if you remember once owned by the monstrous Jesus Gil y Gil who ate managers for breakfast but was ultimately brought to book for his various malfeasances.

Atletico’s melange of Spaniards, South Americans and a formidable Turk in Arda Turan – a goal scorer – has been assembled with the utmost shrewdness and economy.

I hope Atletico beat Real – they have done so already domestically – both in the Campeonad and the European Cup.

Meanwhile, as UEFA close in financially on PSG and Manchester City, Simeone and his team can bask in the glow of their victory at Stamford Bridge. Who’s Special now?