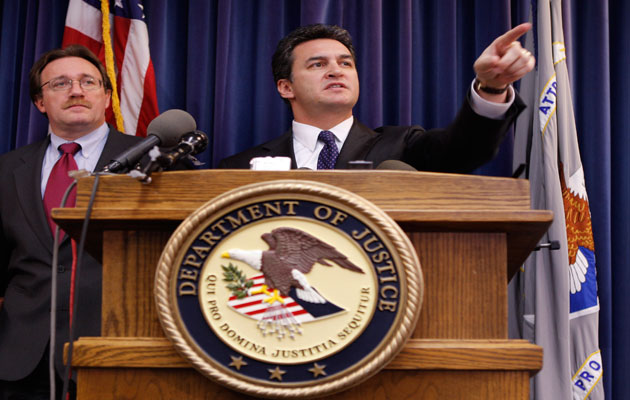 Communications chasms gaped open in the pinnacle of the FIFA pyramid today amid the volcanic rumblings generated by Michael Garcia’s investigation into the 2018-2022 World Cup bid scandal.

Earlier in the week Michael Garcia, the world federation’s independent prosecutor, has issued a demand that this week’ executive committee meeting approve publication of the 430-page report he had handed over to judge Hans-Joachim Eckert.

Any prospect of the exco, as several senior members had demanded, even debating the issue was shot out of the water on legal advice before they had a chance to raise it.

President Sepp Blatter sought to calm increasingly troubled waters later by saying that he had not received any formal request for publication from Garcia – “only press releases.” In any case, Eckert was due to make a clarification statement about the process thus far in early November.

Blatter was accompanied at his post-exco press conference by Marco Villiger, FIFA’s in-house lawyer. Villiger explained that the legal foundation for the code of ethics, to which Garcia was answerable, included a principle of confidentiality.

“If it were not for this,” said Villiger, “perhaps whistleblowers might not cooperate if such confidentiality did not exist.”

Garcia, added Villiger, had interviewed 75 witnesses in the course of his two-year investigation and had handed his report over to Eckert who would “give a public statement at the beginning of November.” Then it was up to Garcia to decide what charges might be brought and against whom.

The groundswell of opinion which appeared to have been building in favour of some sort of publication – from vice-presidents Michel Platini, Jeff Webb and Prince Ali of Jordan as well as from US exco member Sunil Gulati – had melted away.

Blatter ascribed this partly to Garcia’s failure to submit a formal request to the exco and partly to the fact that his potential exco supporters had not been involved in the controversial host award votes in December 2010.

He said: “The only contact we have had with the chairman of the investigatory committee [Garcia] was his press release that we have received but we have not received any demands or requests from Mr Garcia to speak with us or ask that we should make a decision on this report and publish this report.

“Therefore the discussion we had was the resume as presented by Marco Villiger. We haven’t had any direct contact with Mr Garcia.”

As for potential support for Garcia from inside the exco, Blatter added: “Most of the requests were from people not here on December 2, 2010, when the decision was taken for the World Cups of 2018 and 2022 and today there were no longer any requests from any of those members to publish this report.”

Now, suggested Blatter, waiting a little longer for Eckert to make the promised interim statement was no big deal. In any case, Garcia had caused one delay in not delivering his report as early as originally promised.

Blatter added: “So now we are in delay but a further delay of 30 days will not change anything and we will be in accordance with our regulations concernined ethics committee procedures.

“It does not change our wish and will to be transparent.”