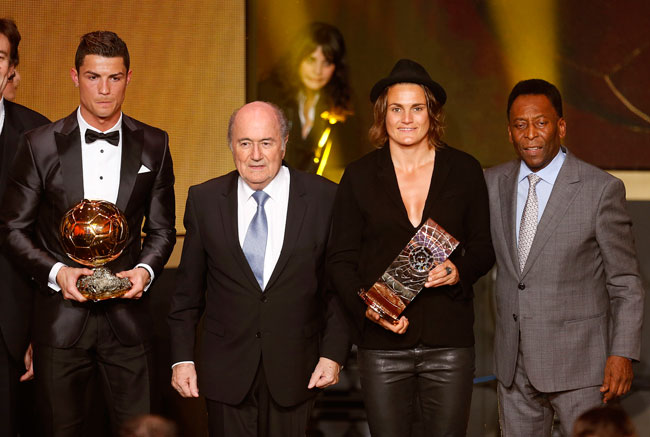 No Leo Messi award was ever as emotional as this year’s FIFA Gala in Zurich: Cristiano Ronaldo’s desire to be hailed as the World Player of the Year burst through into tears as he regained the sovereign individual prize which had eluded him for the previous four years – to his infamous annoyance.

Ronaldo took the top prize for 2013 ahead of Bayern Munich’s Franck Ribery and Barcelona’s Messi. His one previous triumph was in 2008 since when he has always had to play second or third fiddle (or, once, worse) to his nemesis from Barcelona and Argentina.

Critics may cavil that he benefited from a voting extension granted to the world’s national coaches and captains which, happily, encompassed his one-man destruction of Sweden in the World Cup qualifying play-offs.

But that would be hardly fair to a magnificent forward who had maintained his inspirational, goal-scoring consistency over yet another magnificent personal year to such an extent that he is eclipsing the records of such Madrid legends such as Alfredo Di Stefano, Ferenc Puskas and Raul.

Earlier in the day Ronaldo said he had cleared the air with Blatter over jocular comments by the FIFA president at the Oxford Union last October over the Portuguese forward’s manner and hairstyle. Ronaldo said: “The matter is in the past. We had a telephone conversation to clear up everything that had to be cleared up.”

Ribery was a rare German also-ran at the annual FIFA jamboree in the Zurich Kongresshalle in front of the great and the good of the world game plus Olympic president Thomas Bach.

The FIFA Women’s Player of the Year prize went to Wolfsburg’s Nadine Angerer with national boss Silvia Neid taking the Women’s Coach of the Year honours.

Jupp Heynckes, who retired last summer after guiding Bayern Munich to the treble of domestic league and cup plus Champions League, took the men’s Coach of the Year prize ahead of fellow pensioner Sir Alex Ferguson and Borussia Dortmund’s Jurgen Klopp.

Looking beyond ‘the family’ the FIFA Presidential Award went to Jacques Rogge, who retired as president of the International Olympic Committee last September.

Blatter hailed Rogge for the “excellent collaboration” enjoyed by FIFA and the IOC during the former Olympic sailor’s command of his own organisation between 2001 and 2013 which had been of “service to humankind.”

Rogge, in his address of thanks, said he was now looking ahead with confidence to the two great sporting events of 2014: the imminent Olympic Winter Games in Sochi next month and then the FIFA World Cup in Brazil in June and July. He was sure of the “great success” of both.

Zlatan Ibrahimovic graciously accepted the Puskas Award for the finest goal of the year, his incredible, angled bicycle kick strike from 40m against England for Sweden.

FIFA also honoured Pele with a special Prix d’Honneur during an hour-long awards show which was broadcast live to 180 countries and, appropriately in World Cup year, was top-heavy with Brazilians.