Danny Welbeck reaffirms the Immutable Law of the Ex

Italy’s immutable law of the ex still seems to hold good. Meaning the tendency of players to score against their former clubs: and how dramatically Danny Welbeck illustrated it at Old Trafford.

Last summer Manchester United sold him to Arsenal for a modest £16 million, their new manager, Louis Van Gaal, dismissively stating that they didn’t really need him, they had strikers enough and besides, a youngster in James Wilson was coming up apace.

For England, Welbeck under Roy Hodgson appeared frequently, though often used out on the left flank where I never felt his talents were truly accommodated. He had been that comparatively rare phenomenon, a Manchester United player born and bred and developed there, but of late, kept out of a central attacking role at Arsenal by the French international Olivier Giroud, when he returned from a lengthy spell out with injury.

That he was picked by Arsene Wenger ahead of Giroud for the Old Trafford game, was at once a surprise and as it proved, a masterstroke.

Of late Wenger, who to be frank I thought was lucky to survive several shocking defeats last season, even if the Gunners did win the FA Cup, had hardly distinguished himself in tactics and selection. The recent humiliating defeat at the Emirates by the supposed underdogs Monaco was a deeply embarrassing performance in which Giroud, previously in good goalscoring form, missed sitters. But Wenger’s belief in what one may call horses for courses was in the event triumphantly justified.

A very rare victory indeed for the Gunners at Old Trafford, and a highly important one as they must be favourites now to win their semi-final at Wembley against Bradford City (who did remember, humiliate them a couple of years back in the League Cup) or Reading.

But what of Van Gaal, who came to United trailing clouds of glory, a largely successful manager of Holland in the recent World Cup, a divisive figure at Bayern Munich and Barcelona? In what way can he possibly said to have surpassed the dismal record of his predecessor David Moyes?

In the Arsenal game. he kept two major internationals, the hugely high maintenance Radamel Falcao, and that elusive and inventive Spaniard Juan Mata on the bench throughout. But brought on in attack the young and so far hardly effective Adnan Januzaj, who never seems to score.

All too often in recent matches, Van Gaal’s teams seem reduced to hitting long balls at the towering Fellaini, who did more than most against Arsenal, but no more than any other United striker, is an adequate replacement for the injured Robin Van Persie.

In vain does Van Gaal reject criticism that he is reducing United, with its great footballing traditions to a long ball team – but in so far as Fellaini is playing, what else can the pattern be?

Though you could hardly blame him for Valencia’s moment of aberration when he feebly tried to pass the ball back to the excellent, much put upon David De Gea, only for Welbeck to triumphantly to dart in, circumvent the keeper and score a second goal for Arsenal, which had it not been for De Gea, might have been three or four.

From Wolverhampton in the aftermath of the recent drawn game at Molineux against Watford, horrific news of a brutal and cowardly attack on a Watford fan after the game.

More than 20 Wolves thugs attacked a perfectly inoffensive trio of Watford fans, knocking them to the floor, where they were brutally and sadistically not only kicked on the ground but had their heads stamped on, leaving a poor Watford fan, a milkman, in hospital, facing if not death then a cruelly afflicted life.

What could one call this abomination but sheer, unadulterated bloodlust. 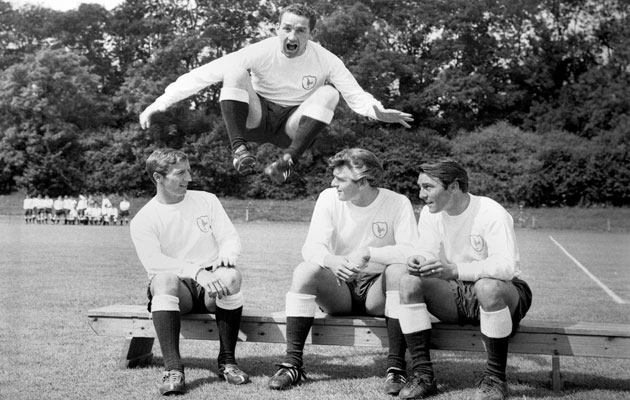 Dave Mackay has died at the age of 80 leaving behind him so many splendid memories. In their great Spurs double-winning days, he and Danny Blanchflower, right half to Mackay’s left might have been known as the equivalent of the hard and soft detective.

Blanchflower all grace, technique and intuition, Mackay hard but fair and by no means short of skill himself. And it would be Mackay nOt the analytical and fluent Danny who would become a successful manager, winning a Championship with Derby County.

His boast was that he was never sent off, but there was one famous occasion, when he was playing for Derby in his playing dotage, he committed a bad foul and was shown a red card. Whereupon he thundered at the referee that he was Dave Mackay and you didn’t send him from the field, he would accept a yellow card at most. Which was duly offered. But for all his power and dynamism he was quite a small man and weighed around 11 stone. And then of course were his famed throw-ins.