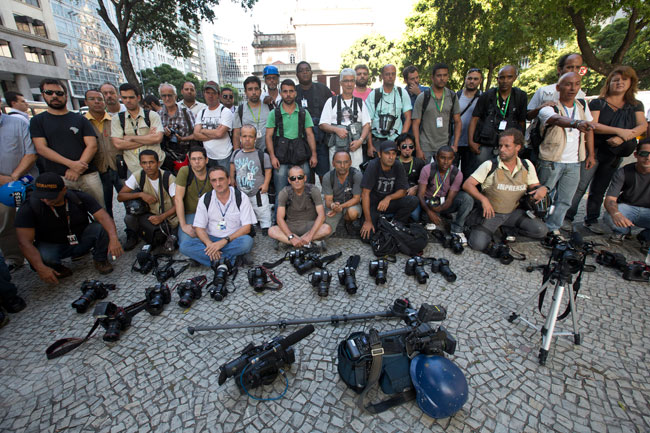 Ilídio Santiago Andrade, a 49-year-old from TV Bandeirantes, was injured fatally after being struck on the head by a home-made firebomb.

Rio police have charged Fabio Raposo, a college student and tattoo artist, with murder by explosive device. He was arrested at his parents’ home in Recreio, in western Rio. Another man is still being sought.

Pele, three times a World Cup winner, said: “Football brings only investment and benefits to all of Brazil. Whether people think that politicians are stealing or cheating is something else. The two are not connected.

“In June and July, during the finals, the country will be full of tourists and it makes no sense for protesters to wreck their own party. A lot of people will not understand.”

Brazil’s preparations for the World Cup have been dogged by delays in redevelopment of all the stadia and airports. The Arena Amazonia in Manaus is due to be opened by President Rousseff on Saturday but even this was cast into doubt by the death of site worker last week and strike threats from the unions.

Rousseff, via Twitter, said the death of cameraman had left her feeling “repulsed and saddened.”

She added: “Freedom of expression is a fundamental principle of democracy. But it is not acceptable for democratic protests to be usurped by those who have no respect for human lives.

“Freedom of speech is a fundamental principle of democracy and can never be used to kill, injure, harm and threaten human lives or vandalize public or private property.”

The state government of Rio issued a similar statement, on Monday, “regretting the death of cameraman Santiago Andrade, who lost his life in the professional practice of journalism.

“Press freedom is a right that must prevail as a tool for exercising the fundamental right to information.

“The right to protest is fundamental to democracy, but violence is unacceptable. Dialogue between citizens and public authorities is the way to improve society.”