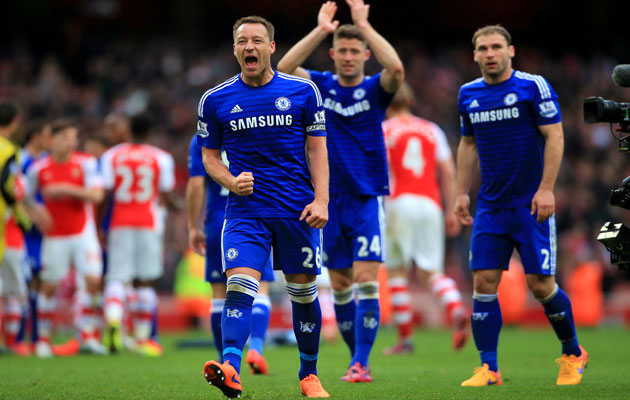 When John Terry so joyfully celebrated at the conclusion of Chelsea’s 0-0 draw against Arsenal, it was a significant moment for a number of reasons.

First because in itself the celebration seemed vastly exaggerated. A goalless draw against an Arsenal team which despite great recent improvement (let us forget about that beating by Monaco) was hardly a sensational achievement. Chelsea after all were already within imminent reach of winning the Premiership.

Secondly, because Terry himself had been the outstanding player on the field, a Titan in defence, not only in his own dominant performance but in the way he marshalled his fellow defenders.

Finally in the reminder of how huge a loss and quite surely superfluous one to an England defence which still desperately needs him.

I blame David Bernstein for that. As an unmemorable chairman of the Football Association, he had twice crossed Terry’s path to the detriment of the player and arguably to the national team.

I am not trying to make a plaster saint out of Terry. He has a long record of what may politely be called unfortunate incidents. Most of them off the field, but one all-too-seriously on it. When, in that crucial, supremely dramatic European Cup game in Barcelona he gratuitously fouled an opponent so seriously as to be sent off. To their enormous credit, Chelsea laboured on to qualify for the final.

Bernstein reacted to the horrid affair of the torrent of abuse directed by Terry towards the QPR centre back Anton Ferdinand. Terry insisted that, racist or not, it wasn’t directed at Ferdinand himself and when the case came up in the Westminster magistrates court, it was you might say deadlocked; Terry was not convicted.

Until very recently, that would have been that, the FA’s rules insisting that such court decision could not be changed or challenged. But that particular veto had just been dropped, which enabled the FA to hold an inquiry of their own which found Terry guilty. They suspended him, fined him and made his captaincy under, which under Bernstein, had been so prematurely taken away from him before his case ever came to court, ineluctably a thing of the past.

After which, Terry not surprisingly announced that he would never play for England again. A position he has maintained even when Roy Hodgson seemed ready to restore him.

It is far too late to do anything about it now, but his absence from England’s team is as notable as his huge contribution to the successes of Chelsea.

Dominic Bliss’s Erbstein: The Triumph and Tragedy of Football’s Forgotten Pioneer (Blizzard Books £10) is a remarkable piece of work about a truly remarkable figure.

At its essential best, where it recounts Ernest Egri-Erbstein’s sufferings and persecution in the Second World War, it is greatly moving and memorable.

In a sense, however, Bliss is the victim of his own huge diligence and resourcefulness. Such is his fascination with his compelling subject that, for most of its early chapters, one is inundated with an endless mass of recital of what Wordsworth called “old far off forgotten things, and battles long ago.”

Match after match in the deeper regions of Italian League football is meticulously chronicled. Perseverance is needed, but it is richly rewarded when it comes to the Second World War and Erbstein’s vicissitudes.

Born in Transylvania but moved with his family to the Hungarian capital Budapest, he became a robust, sometimes even violent, half back with the BAK club, joined the Hungarian Army when the war broke out and rose to become a resourceful officer.

The war over, he resumed his highly physical playing career and found his way to Fiume, the much disputed city. On the Adriatic coast, playing with increasing success for the Olimpia club, a steadily growing tactical influence. Thence to Vicenza and the first of his many years with Italian clubs.

As a manager, he would eventually have influential periods at Lucchese and Cagliari. But Fascist Italy’s anti Semitic policies forced him to leave his first employment with Torino.

Crossing the German border with his wife and daughters en route to Holland he was brutally pulled off the train with them by Nazi thugs and thrown into a prison for Jews. How he and they escaped this and later how they survived and German occupation and vicious persecution by Hungarian neo Fascists is a dramatic and supremely well told tale.

The ultimate irony was that Erbstein, a man of character, culture and notable humanity, should perish in the May 1949 Superga air disaster with the Torino team to which he had returned and to which he had contributed so much when the aircraft bringing the squad back from Lisbon crashed, killing everyone aboard.

At its relevant best, the book is fascinatingly admirably researched but in consequence, perhaps, too often submerged in remote detail.