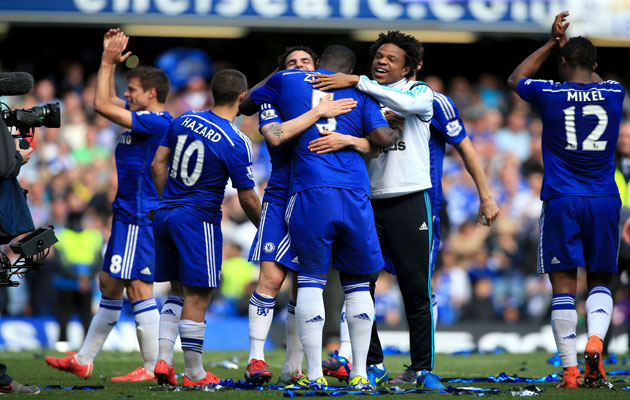 No, it wasn’t an old Portuguese saying, it was a very old Eastern saying.

“Dogs bark but the caravan passes by,” said a caustic Jose Mourinho in response to what he felt to be inadequate appreciation of his Chelsea team winning the Premiership by a distance.

In fact I recall the saying from a pre-war cigarette card in a series of Eastern proverbs: “The dogs bark but the caravan passes.” I can still remember a few of the others: “Call on god but row away from the rocks” and “The girl who sells fans often shades her eyes with her hand.”

Perhaps we shall hear more of these from Mourinho in the future. There is an old relevant French saying, too: “Qui s’excuse s’ accuse.” “He who excuses himself accuses himself.” In dismissing naysayers after Chelsea’s success, Mourinho might have been aware that in the second half of this season, Chelsea however often they won frequently did so by such narrow margins.

Alan Shearer was among those who showered the Chelsea team with generous praise. Yet two dire results at Stamford Bridge still stick in the mind. That embarrassing FA Cup defeat by the remote outsiders Bradford City, 4-3 after Chelsea had cruised into a 2-0 lead. And the dire doomed draw against a PSG team reduced to ten men early in a game which went into extra time with Chelsea so surprisingly unable to exploit such a huge advantage.

Not for a moment would I contest that Chelsea fully deserve to win this Premiership, but the competition has been disappointingly lame. Manchester United under the eminent Dutchman Louis Van Gaal (when will so many commentators finally realise that the G in his name should be pronounced as an H?) have been a team of bizarre inconsistency.

Manchester City have flagged badly in the latter stages of the season, despite the huge sums of money spent on foreign stars.

Arsenal under Arsene Wenger finally and emphatically improved in the second half of a season they began so badly, but never mounted a convincing League challenge to Chelsea: and failed horribly at home to Monaco in a European Cup competition in which they at long last seemed capable of reaching the semi-finals. Remember too that not a single Premiership club did any better than they, in the Champions Cup.

It was in June 1947 that Brentford played their last recorded game in the top division of the League. By an odd irony, it was against Arsenal, a team on which for many years they had had an Indian sign. A bogey team, as they were called.

Earlier in the season they had drawn 2-2 at Highbury. Now however on this day of doom, the last in a season prolonged as a result of an appalling winter, they lost 1-0, to a goal headed by Arsenal’s Irish international right half, Paddy Sloan. He’d leave that summer for Milan and be replaced by Brentford’s outstanding player, the red headed Archie Macaulay, good enough to have been picked the previous month to play in Glasgow for Great Britain against The Rest of Europe.

Five years earlier, as a 10-year-old schoolboy, enabled to come up to London from my prep school for a dental appointment, I was able to see Brentford win the only significant trophy in their long history: the League South Cup in its Wembley final against Portsmouth.

A Pompey team fielding no fewer than seven of the players who had won the FA Cup there in 1939. Brentford in the semi finals of this wartime tournament had knocked out a powerful Arsenal team full of England internationals in the semi finals.

I’d seen the drawn first game at Stamford Bridge. In the replay at Tottenham, Brentford had prevailed. Nowadays I find it hard to remember teams I have only recently reported, but for one reason or another Brentford’s at Wembley has stayed forever in my mind.

Two excellent wingers: the Welsh internationals outside right Dai Hopkins whom in the middle 50’s I’d often meet in the little Brentford press room at matches. At outside left Leslie Smith, recommended to the Bees through the son of manager Harry Curtis and just in time to win a full cap for England in Bucharest against Romania before the war began. And at inside right one George Wilkins; father of none other than Chelsea, Manchester United and England’s Ray.

Brentford won that Final 2-0, both goals coming from Leslie Smith. Enthralled, I wrote doggerel about it; you could hardly call it poetry.

Smith’s foot and the ball have met,

One goes crashing through the net.

When Arsenal did beat Brentford in the war – at Griffin Park – it was only 1-0 through a penalty scored by my idol Denis Compton.

“Pick this one out, John!” he called to Brentford’s keeper Jackson, the Scottish international on loan from Chelsea.

Back in the 1950s Brentford were known as The Sleeping Giants, but it has taken them many a year to awake.