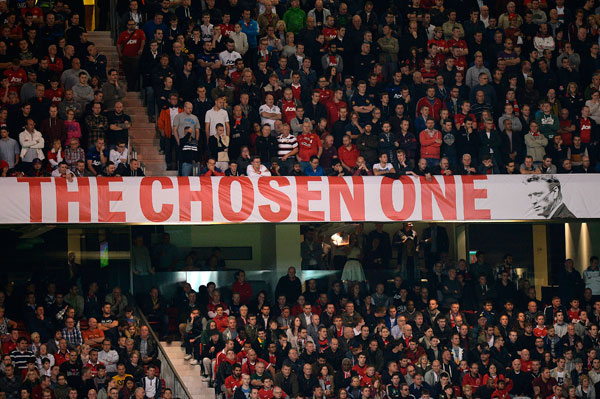 Why blame Moyes? Blame Ferguson. No, not because he allegedly left Moyes with a United team which he knew had run its course. What nonsense. United had won the Greed Is Good League with a massive 11 points advantage and if there were some indication that the team as the saying goes was growing old together, it surely should have had another season in it.

No, I find Ferguson culpable because perhaps unconsciously he didn’t want to nominate a manager who would steal his reverent thunder. Mourinho might have done that. Van Gaal, who could now be taking over, might also have done it.

Moyes is a perfectly decent, thoroughly competent middle of the road manager. One who has never won anything of consequence, but succeeded in keeping a far from wealthy club such as Everton constantly in the top division.

Though Everton’s improvement and success this season under Martinez (when will our monoglot communicators learn to put the emphasis on the second rather than the first syllable?) it is clear that a more sophisticated and adventurous manager could achieve a good deal more.

Had Ferguson stayed, I am convinced he would have, with his enormous psychological and tactical influence, got a great deal more out of this squad. In parenthesis I am sure he wouldn’t have done anything as daft as failing to start an understandably disaffected Danny Welbeck at Goodison.

That he should have been given, supposedly at the instance of Ferguson, a six-year contract (possibly with a three year cut off clause) was plainly absurd. Whatever else, Moyse will leave Old Trafford with £5 million. He can surely console himself with that.

The filth has well and truly hit the fan again over FIFA and the World Cup so farcically and illogically awarded to Qatar. “Not us, Guv,” say the Qatari’s, in a knee jerk reaction but who can take such a denial remotely seriously?

We now learn that the 10-year-old daughter of the ineffable Ricardo Texeira had inexplicably £2 million paid into her bank account by the recently resigned President of the Barcelona club, Sandro Rosell. Y

ou’ll recall that under his aegis vastly more money was spent by the club on the transfer on the transfer of Neymar than was officially revealed. But Rosell it now emerged has been chief of the Brazilian branch of the power sports good company Nike.

Make what sense you can out of the twists and turns of this affair but it is surely beyond serious doubt that there has been dirty work at the crossroads. As indeed there has throughout the devious career of Texeira, obliged to resign from his position as head of Brazil’s World Cup organisation, to take refuse in Miami, when it was disclosed that he and his ex-father in law Joao Havelange were guilty of pocketing huge bribes from the now defunct ISL company in exchange for World Cup favours.

You might well ask why anyone with Texeira’s contentious record – the bombastic self important and dictatorial little man has been charged by Brazil’s Inland Revenue and Justice Department “of tax evasion running into hundreds of thousands of dollars.  Yet this is the man whom the Brazilians put in charge of their 2014 World Cup.

FIFA now say they want the corruption investigation, being diligently pursued by the American lawyer Michael Garcia to be completed before the World Cup begins. The egregious Sepp Blatter, who seems destined to an unopposed run in for the next Presidency of FIFA, is still blithely talking about switched the World Cup from the blazing Qatar summer into the winter; to the appalling detriment of the European clubs.

Michel Platini is in favour of this. A disaster as President of UEFA, he has already made a dog’s dinner of the ensuring European Championship, both in its overloaded membership and in the fact that the finals must be played in a variety of different countries.

Reportedly, he won’t stand against Blatter for the FIFA Presidency, because he knows Blatter has it all tied up with the majority of regional Federations. In the old Sicilian saying, one hand washes the other.

Not to forget the scandalous behaviour and eventual belated expulsion of Trinidad’s greedy fixer, Jack Warner. Courted and favoured, as the correspondence shows, by Blatter for years, because he could deliver the vote of CONCACAF.

We can only hope that FIFA are obliged to re-open the vote on the 2022 World Cup and go bankrupt in consequence. Even Hercules couldn’t clean out these Augean Stables.