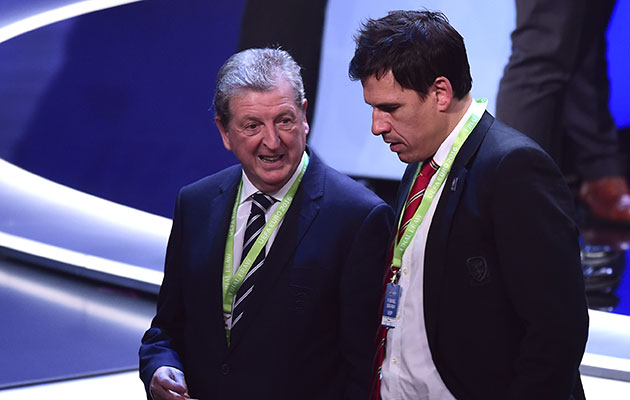 FA CEO Martin Glenn has spoken and appears to have had something of a change of heart.

Where only a few weeks ago the former Walker Crisps tycoon – I‘m aware of his football background – poured tepid water at beaten Hodgson’s expressed wish that he should carry on after the European Championship finals, now he is clearly in favour.

Initially the position he took up seemed perfectly rational. Wait and see. It would depend on how England did in those finals. Now he declares, “I think we’re going to have a good Euro. I think Roy’s going to continue in that role in the World Cup.”

Frankly, what he thinks does not seem to me any kind of criterion. On the face of it, the group in which England are drawn hardly seems insurmountable, but even if it doesn’t, as in the World Cup, contain an Italy or a Uruguay, there’s many a slip.

Though it was a gross piece of insensitivity, the egregious Greg Dyke hardly got things wrong when, attending the draw in Brazil for the last World Cup, his response to England’s draw was to slid his finger across his throat.

I have long been a strong admirer of Hodgson who as I have often said should in my view have been given the England role immediately after the 1994 World Cup finals to which he had against the odds – and Italy – taken the Switzerland team.

Wales? “It’s the one match I didn’t want,” says their manager Chris Coleman, but there is much talk of the threat to England personified by Gareth Bale. The Welsh have done wonderfully well to reach these finals, the first major finals they have ever reached legitimately.

You may remember that when they got to the Swedish World Cup finals in 1958 it was after being knocked out in the eliminators, only to be given – and taking – a second chance when drawn to play off against then mediocre Israel. In whose group the petulant Arab countries had suddenly withdrawn.

The colossal irony being that in the only World Cup tournament in which all four British teams took part, Wales did far the best and, having seen that vital quarter final in Gothenburg, I still believe that had John Charles not been kicked out of contention by the Hungarians, they might, thanks to his formidable head, have beaten Brazil.

Bale with his pace, flair and fine control can ravage any defence but this has not so far been a good season for him at Real Madrid, and Arsenal’s Aaron Ramsey apart, there is no other outstanding player in the side.

Wales in 1958 had several. Can Coleman, so to speak, do a Ted Robbins and persuade his Welsh players to surpass themselves, as that wonderful old magician did when he was Welsh team manager (though actually Secretary of the Welsh FA) before such figures were invented?

Back in the 1950s, when I regularly watched matches in Italy, the rule was that when there was a colour clash it was the home team which had to change its shirts. The logic of which, pretty convincingly, being that home crowds could watch their own team in its normal colours most of the time but wouldn’t in different circumstances be able to see the visitors in theirs.

All this because I am becoming heartily tired of seeing one team after another changing shirt colour when there is no colour clash at all. Reportedly and ignominiously for commercials reasons.

Arsenal are among the worst offenders time and again changing their famous red and white into some dull and displeasing concoction. Given the astronomical prices they charge at The Emirates, do they really need that money? On reflection, perhaps they do since their chief shareholder the American Stan Kroenke is taking £3 million a year out of the club for services rendered, whatever they obscurely be. 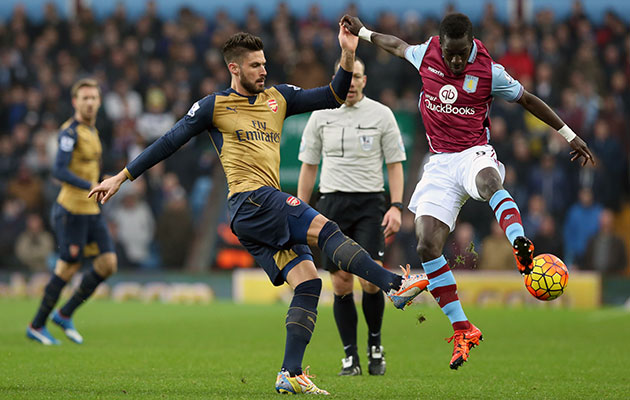 Clash of shirts? Arsenal frequently change colours when they don’t need to.

But most recently I saw Brentford, red and white stripes, play Fulham, white, in an all blue strip.

Newcastle United are given to abandoning their famous black and white stripes when there is no remote chromatic need.

How I wish that the authorities of the Premiership and of the Football League would issue a stern rebuke compelling teams to wear their own strip when no colour clash occurs.

Centre forwards live! Despite the attempt by critics recently to declare that they don’t.

Olivier Giroud’s splendid hat trick against Olimpiakos for Arsenal, a 6 foot 4 Frenchman not always popular with fans of France and whatever Arsene Wenger now says, not always a certain starter for Arsenal, reminded us of what a natural centre forward can do.

Funny how Arsenal history repeats itself; the legendary Herbert Chapman spent years and big money looking for a centre forward to replace the perfectly effective Jack Lambert. But when prolific Ted Drake arrived in 1934, Chapman had just died. Drake got 42 goals in his first full season and all seven in a victory at Villa.