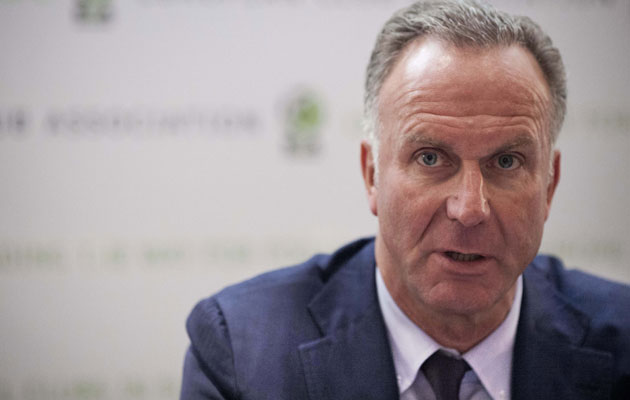 Karl-Heinz Rummenigge, chairman of the European Club Association, has been pulled off the diplomatic fence over the timing of the 2022 World Cup in Qatar.

Rummenigge, also the chief executive of German champions Bayern Munich, has long held the most diplomatic line over the prospect of the finals being switched to the winter to avoid the summer heat in the Gulf.

However even he is now acknowledging the strength of feeling among Europe’s leading clubs that a move to, say, November and December would be commercially and competitively disastrous.

His deputy, Milan’s Umberto Gandini, has been far more outspoken and antagonistic than Rummenigge.

ECA representatives on the FIFA taskforce reviewing the timing switch options will sing off the same hymn sheet next week at a meeting in Zurich on Monday and propose April and May as the only possible option.

Under the ECA proposal the finals would open on April 28 with a final on May 29.

This would come as a huge relief to winter sports federations which feared any incursion of the World Cup into ‘their’ season even if FIFA fulfilled a pledge of president Sepp Blatter to steer clear of the January/February preserve of the 2022 Winter Olympics.

Rummenigge said: “It would be nonsense to play in the summer in 50deg heat – impossible – but we must find a solution that is least painful for the leagues and especially the clubs. We believe this proposal is the best option.”

He thought this proposal would best balance the issues of climate concern with the traditional football calendar in Europe whose clubs provide 75pc of the players at the World Cup finals.

Rummenigge added: “It is an achievable solution.”

The Qatari organisers, who have promised to develop solar-powered air cooling for stadia, training grounds and fan zones, have insisted they will be happy with whatever FIFA decides. But they would like a decision in 2015.

A study paper by the ECA suggested that, to accommodate the timing switch, European leagues would need to advance the start of their 2021-22 seasons by “a maximum of two weeks.”

This would involve scrapping the two-match international break in mid-March. The knockout stages of the Champions League could be tightened to two from three weeks while countries with significant cup competitions could complete them after the World Cup in June.

Players would be released for their national team World Cup preparation on April 18, 2022, some 10 days before the Opening Match.

The ECA believes that Qatar’s climate in late April and May provides conditions better than those experienced at Mexico 86, USA 94 and this summer’s World Cup in Brazil. Data from the past 10 years suggests temperatures would range between 29 and 32 Celsius.

One hitch is that the start of April to early May in 2022 coincides with Ramadan but this would not the first time the clash has occurred and players have been able to obtain permission to observe the fast at other dates, should they wish.