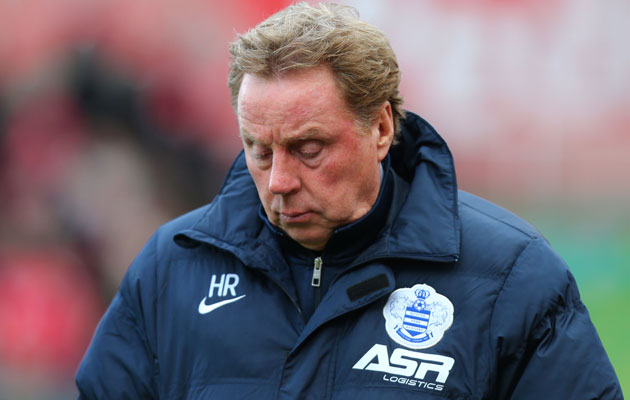 It was also a punch in the stomach elicited by himself in an unguarded moment which tragically yet ludicrously finished the life and the astonishing career of the magician Houdini.

In the case of Harry “Houdini” Redknapp, thank goodness, nothing so stringent has happened. It is simply that at the age of 67 and in great pain from both knees, he has resigned as manager of a struggling Queens Park Rangers. He will, he insists, be back. In the meantime for a mere £3,000 or so, he is available for public appearances.

So the supreme escapologists leaves behind him a team which though it would mathematically survive, seems less and less likely to do so. It has lost every single one of its eleven away games. And perhaps the writing was on the wall after the very first game of the League season when one saw them lose 1-0 at home to Hull City.

After the match it was very strange to hear Harry praise the performance of his veteran centre back Rio Ferdinand as a “master class.” The sad fact was that Ferdinand’s failure to mark his man at a corner had given Hull their winning goal.

It was surely a reflection of Harry’s luck that QPR were in the Premier Division at all. After an inconsistent season, they had just about managed to reach the play offs in whose Final at Wembley they met Derby County, who proceeded to outplay them. But just when all might have seemed lost, what should a preciously impeccable Derby centre back do when moving to cut out a right wing centre but slip, allowing the ball to run on and be easily despatched by Bobby Zamora.

Hovering menacingly above the club’s head is the inevitability of a colossal fine if they if they drop back into the Championship.

And Harry? After his dramatic victory in court, not long ago, it seems that nothing could frustrate him. Accused of tax evasion, of opening a dubious account in Monaco supposedly in the name of his dog, he came under withering fire from the prosecuting counsel, so much so as to provoke an outburst of resentment from him. But the verdict was not incumbent on the judge but on the jury, and with one triumphant bound Harry was free.

He detests being called a wheeler dealer, but there is no doubt that he is renowned – especially in his years in charge of the club he once played for, West Ham United, for his sometimes frenetic activity in the transfer market. In his last months at West Ham, you suspected the existence of a revolving door.

No more than a moderate winger though his son Jamie was a resourceful England international, he would have made an enormously popular manager of the England team itself. The football public wanted him, and his success at Spurs at the time was perhaps the most notable of his career, but in the end the job as we know went to Roy Hodgson and not long after that, Tottenham and their dominant Chairman Daniel Levy got rid of him.

He had, you might say, fallen between two stools. And so to QPR where luck was surely with him again as he conjured them into the top division. Things indeed began badly with that opening home defeat, and Harry’s 3-5-2 tactics were notably unsuccessful, and would shortly be abandoned.

Watching the latest defeat at the very death by Southampton in Shepherd’s Bush, with two coaches now on Harry’s bench, while Tim Sherwood appeared to be waiting in the wings, one was intrigued to watch the intelligent performance of Adel Taarabt, the Moroccan international attacker, belatedly restored to the team by the temporary coaches.

There has never been any doubt about his unusual talent, only about his temperament and application and there had been a furious fall out with Harry early in the season. These things can happen of course at any club but one was surprised at the untypical way Harry let it go rancorously public. He furiously and openly criticised Taarrabt for being culpably overweight, to which the played replied just as publicity and just as angrily. So dirty washing had been inexplicably done in public, leaving a rancorous situation in which a disaffected player would be left on the sidelines.

Only once have I had any kind of issue with Harry, a man whom I have always liked and appreciated. That was over an Australian centre back, Hayden Foxe, for whom, at West Ham, he wanted to get a work permit, on appeal to the small Department of Employment committee of which I happened to be a member.

Harry praised the player to the skies, announcing that Juventus were keen to have him and thus time was of the essence. But though I saw his point the committee split 2-2 and so the appeal was rejected. Somehow or other against previous procedure, West Ham were allowed a second appeal. Just before which I happened to know that the centre back’s egregious error had given Italy a 1-0 win over Australia in the Sydney Olympic tournament.

The committee split 2-2 again and the request was turned down once more. Shortly after this, at a post match press conference at Upon Park, Harry, carefully not looking straight at me, unleashed a tirade. How could an Aussie, he asked, whose country had helped us in the war be refused when a German had been welcomed? Harry had to apologise to the Department. And the player? When he did get in was notorious for urinating on the bar in the Sugar Reef club’s VIP area.