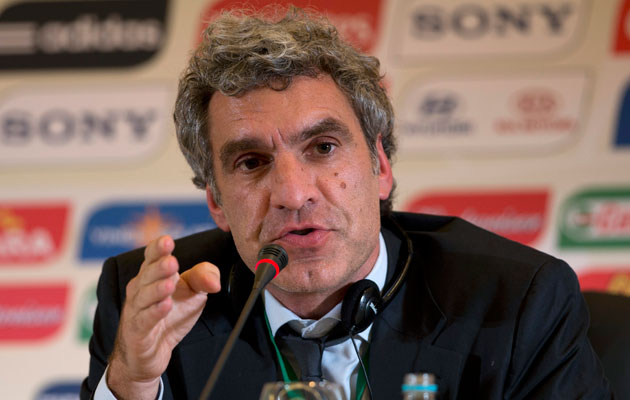 Another FIFA ‘head’ has fallen after Walter De Gregorio stepped down ‘with immediate effect’ as director of communications of the world football federation.

A statement said De Gregorio, who joined FIFA on September 14, 2011, will serve ‘on a consultancy basis’ until the end of this year. His deputy, Nicolas Maingot, will take over in the meantime – not the first time the Frenchman has stepped up as caretaker.

Secretary-general Jerome Valcke responded to De Gregorio’s exit by saying: “Walter has worked incredibly hard for the past four years and we are immensely grateful for all he has done. I am glad we will be able to continue to draw on his expertise until the end of the year.”

De Gregorio was brought in specifically by Blatter to bring a more aggressive, instant-response approach to FIFA’s PR work. As a journalist and former war correspondent his background appeared ironically appropriate to the task in hand. However an ill-timed bad joke may have sealed his fate.

A four-year reign has seen the communications department expand not only in relation to FIFA’s ‘media face’ but in terms of a multi-platform approach to the overall message within the game and beyond it.

However De Gregorio had always indicated that he would leave FIFA at the same time as Blatter who announced last week that intended to quit only four days after being re-elected for a fifth term of office.

Now at least De Gregorio will be spared having to front up, in the most difficult circumstances, to attempt the impossible and put a positive spin on all the myriad FIFA crises erupting from all over the world.

De Gregorio’s last formal solo appearance was on Wednesday, May 27, when he conducted a one-man press conference in the FIFA media theatre in the wake of the dawn raid at the Baur au Lac hotel which saw the arrest of seven men including two FIFA vice-presidents.

He explained that the seizure of documents that morning by Swiss justice officials from FIFA’s own offices had followed its own complaint last Novemver against ‘persons unknown’ regarding the 2018-2022 World Cup bid process.

In a series of understatements he conceded “the timing may not be obviously the best” but sought to issue an assurance that “the general secretary and the president are not involved in this procedure. It is a difficult moment for us.”

De Gregorio added: “This, for FIFA, is not good in terms of image or reputation but, in terms of everything we did in the last four years this is good for FIFA. It is a nice day. It’s a good day because the process goes on and we are looking forward to having the results, otherwise it leaves room for all kinds of speculation.”

Asked about Blatter’s reaction to the arrests, De Gregorio said: “He is quite relaxed in that he is not involved. He is not dancing in his office but he is very calm, he is fully cooperative with everybody. He is not a happy man but he knows this is the consequences of what we initiated.”

De Gregorio’s fate may have been sealed by an ill-advised joke he craked during a Swiss television interview on Monday.

He said to the interviwer: : “The FIFA president Sepp Blatter, the director of communications and the general secretary are all sitting in a car – who is driving?”

Interviewer: “The answer is?”