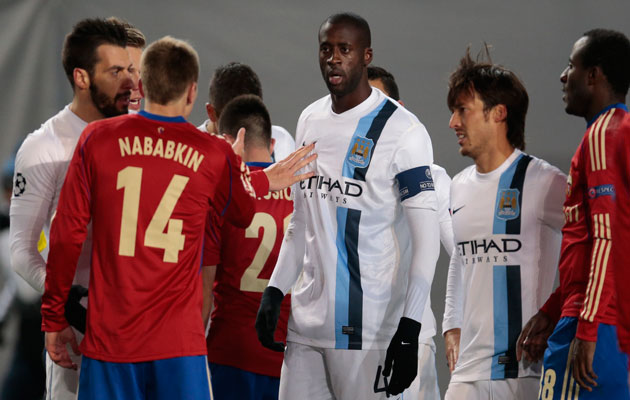 FIFA is stepping up its fight against discrimination in football with the introduction of a new anti-discrimination monitoring system for the 2018 World Cup qualifiers.

It will be rolled out for specific matches in the qualfiers and then at every match at the finals in Russia, already notorious for the racist behaviour of its fans.

The system was presented officially on Tuesday at Wembley by a panel including Manchester City midfielder Yaya Toure who had been targeted on a number of infamous occasions, infamously when playing for City against CSKA in Moscow in the Champions League.

He said: “I’m very satisfied to see that FIFA is taking this issue very seriously and putting in place concrete measures to stop behaviour which goes against the spirit of our sport.

“Paying a 20,000-euro fine, something like that, is not enough. We need to do more. As an African it is difficult to be in this situation. In the past I have spoken about this. It’s very important to me.

“Sport should be about togetherness but situations, like when you hear monkey chants, are difficult to deal with. You are a sportsman, you want to finish the game, but hearing something like that can break you.”

Ultimately Toure endorsed the overriding need for ongoing education of all within the game – including fans in particular – to remove the responsibility for action from players tempted to take action over racist chanting into their own hands and walk off in protest.

Toure refused to discuss speculation about his future at City whom he is thought likely to leave this summer. He said: “This issue of racism is more important than my future.”

The new system includes the deployment of specific match observers to monitor and report issues of discrimination at the games.

Such implementation should avert any more incidents such as the public spat between Jeffrey Webb, president of FIFA’s task force against racism and discrimination, and disciplinary chairman Claudio Sulser at last year’s World Cup finals in Brazil.

Webb complained that Sulser’s committee had not acted against the federations of Mexico and Croatia for racist behaviour by small groups of their fans but Sulser responded that the evidence was insufficient.

Later it emerged that time constraints had prevented FIFA creating a match monitor operation. The new system addresses that issue. World Cup qualifying matches deemed to be ‘at high risk’ of racist behaviour will be monitored as will all matches during the finals themselves.

The system is being coordinated by FIFA and implemented in collaboration with Football Against Racism in Europe (FARE) which has long experience in the fight against discrimination in football and the deployment of match observers.

A FIFA statement described the measures as “a key step in FIFA’s ongoing fight against discrimination and follows on from the recommendations of the FIFA task force against racism and discrimination.

“It will facilitate and complete the work of FIFA referees and disciplinary bodies. The main objective is to optimise legal procedures by providing much needed evidence leading to potential sanctions.”

After every monitored match, the match observer will provide a report within 24 hours to FIFA’s disciplinary department which will analyse the information and decide on the potential opening of disciplinary proceedings.

Powar said: “There is now a greater acceptance of the need to tackle discrimination because of the corrosive impact it has on society and on football as a magnifier of discrimination if it is left unchecked.

“We’ve seen a lot of action being taken and the picture has changed a lot over the last 20 years, 10 years, even five years.

“This collaboration between FIFA and the FARE network marks a milestone in the fight against discrimination in football.

“We are bringing our experience and know-how in identifying matchday issues and will work with leading experts across the world to ensure that football’s flagship event shows that football does not have to be associated with issues of discrimination or exclusion.”

Addiechi, like Powar, addressed the contentious issue of the Russian authorities’ ambiguous attitude towards racist behaviour in their domestic game.

He said: “We must make a distinction between what happens in Russian dometic football and the World Cup. This is a key issue for our strategy and FIFA and the World Cup local organising committee have a direct responsibility because it’s our event and we have to make sure everyone feels comfortable because the World Cup is fro everyone.

“Our aim is to bring additional support for the Russian football federation and we have discussed ways to support them with good practice and other campaigns for them to be able to tackle a problem which is under their jurisdiction and is happening on a weekly basis in Russian football.”