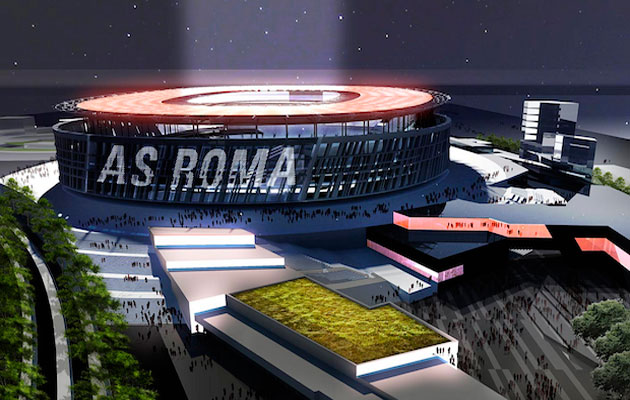 Once upon a time English clubs envied the Italian model of renting municipal stadia and thus avoiding the financial weight of owning and running their own home.

The giants of Serie A were thus ‘free’, from the 1950s to the 1970s, to pay the highest transfer fees and most lucrative wages.

Then came the TV, sponsorship and new media explosion and England developed the Premier League model and cashed in on the new generation of stadia built and rebuild post-Hillsborough.

With restaurants, conference facilities and even sometimes hotel built into the grounds new revenue streams opened up.

Meanwhile Italian municipal authorities, angered by their own game’s failure to confront hooliganism, relegated stadia maintainance and development to the foot of the budgetary table.

Thus the rise of the financial power of the Premier League was balanced by the fall of Serie A. Not only did star players head for England but Italy, for the first time, became an exporter of footballers for the first time in its history.

The great old stadia such as San Siro in Milan and the Olimpico in Rome were renovated, but inadequately, for the 1990 World Cup. The white elephant of Stadio delle Alpi was built in Turin, an elliptical nightmare for spectators and financial waste of space.

Juventus, after long negotiations with the Turin local authority, had the Delle Alpi razed and replaced with what is, to all intents and purposes, their own new home; Roma’s new American owners finally envisioned a prospective financial route out of the Olimpico which they share with Lazio; and new Internazionale owner Erick Thohir established a priority need to resolve the San Siro stasis.

Now Juve are already making their new home pay and the evidence of ‘new thinking’ is illustrated with three scudetti in a row.

Thohir is an Indonesian business who shocked Italian football by buying into Internazionale while being, similarly, majority owner of both DC United in Major League Soccer in the United and Indonesia’s Persib Bandung.

He and Roma’s American president James Pallotta both explained the progress being made at the Leaders Sport Summit in London.

Thohir talked of the financial balancing act essential between practicality and expense. He said: “At Inter we want to have our own stadium but how many seats can we fill? How many concerts can we sell out? When you own a stadium then for a minimum of 226 days a year you need to sell 50pc capacity.

“When we build the DC arena in Washington, the design had to make it suitable not only for football but also for concerts, for lacrosse, for college football and rugby. That is why sharing San Siro is good on one level because we can fill up more days.

“We are in discussions with AC Milan to understand what they want to do with the stadium.”

Thohir has no doubt that clubs should want to own their own home but cautioned that building a new venue was not sufficient of itself.

Club managements needed a realistic appraisal of the breadth and depth of the ancillary business they could operate and facilities to accommodate fans’ personal needs in a digital age.

Pallota, who heads a consortium which took over Roma in 2011, said that they had started working on a new home project soon after buying control of the club.

He said: “We commissioned a third party company to find us some land and they came up with 106 proposals. There’s a great piece of land, 15 minutes from airport, 15 minutes from the Vatican on the river and inside the ring road. It’s spectacular.

“So we started the design phase two and a half years ago and hopefully we will break ground on May 1. It’s needed badly and we won’t be sharing it with anybody.

“We’re planning a 60,000-seat stadium which meets all the new UEFA guidelines. We’ve already had inquiries about using the stadium and we want to talk to NFL and NBA.

“We have AEG onside for concerts and opera festivals and, of course, we will have the usual such as a training facility, superstore, live enteraintment space, high-definition TV and radio studios, hotels, catering outlets.

“We’re pretty excited about how it will change the dynamics of what we can do in Rome. In two years’ time, hopefully, we’ll be opening up the 2017 season in a new stadium.”

It’s taken time but Italian football is fighting back. Milan will host the UEFA Champions League Final in 2016. It could be the last sight of the old Stadio Giuseppe Meazza as European football has known it.