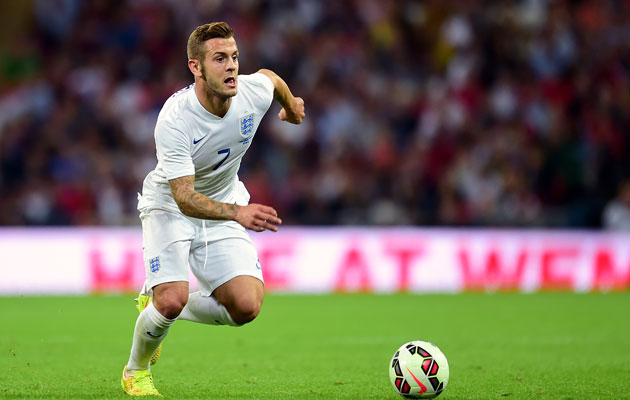 It was I believe Mohammed Ali who once remarked, “You don’t ask a racehorse to pull a plough.”

The words occurred to me over the current controversy about Jack Wilshere and how ideally he should play.

With all due respect, I believe that the England manager Roy Hodgson has got it radically wrong when trying to use Wilshere as a deep midfielder in his diamond formation. It was all too obvious in Basel that though he was hardly a failure in the role, it manifestly didn’t suit him.

Since then, controversy has arisen. Arsenal’s manager Arsene Wenger stated firmly that Wilshere’s ideal position was not at the back but in central midfield, with the liberty to go forward. Using his many undoubted talents to construct, elude and break forward.

As against that the former Liverpool defender Jamie Carragher wrote in his newspaper column that Wilshere should learn to play the deeper role. He hadn’t we were told the alleged dynamism of such as those other England midfielders, Jordan Henderson and Fabian Delph. So what? Neither of those players has remotely the ability Wilshere possesses of “inventing the game” with a subtle and unexpected pass.

Last Saturday, filling his ideal position with the Gunners against Manchester City at The Emirates, he was in resplendent form, even to the extent of scoring spectacular goals. Even though he may have been somewhat likely not to concede a penalty for handling. At least two leading sport columnists reporting the match strongly emphasised that this was Wilshere’s ideal function and the one he should be permitted to fulfil for England.

If Roy Hodgson wants to play with the so-called diamond, it’s his prerogative, but not at the expense of wasting and curtailing arguably the only Englishman currently capable of making an inspired pass.

If he continues to pick Wilshere as he surely should, then he must use him where he is best suited. If he insists on his diamond formation, then he will have to find someone else to function in deep midfield. And if there is nobody who can do so, then it is the diamond strategy which should be abandoned.

A player should never be sacrificed to a tactic. Especially one as gifted as Wilshere.

Snouts in the trough again at FIFA. This time members of its executive committee greedily pocketing hugely expensive watches, against the plain rules of their organisation.

It was good to see, but no surprise, that one of the three refuseniks was America’s Sunil Gulati, of whom, knowing and respecting him, I would have expected no less. I still believe that he would be an ideal choice as President of the organisation, but that is no more than a chimera. We know, all too horribly well that the deplorable Blatter will sail through again for a fifth depressing term.

The Sunday Times, which had already revealed the shocking corruption whereby Qatar obtained the 2022 World Cup, now tells us that Blatter and members of his executive committee secretly received watches worth $25,000 each from the Swiss firm Parmigiani, during the tournament itself.

It also transpires that Michael Garcia, head of the ethics committee, who duly vetoed the Parmigiani gifts, had also forbidden the 26 executive members and Blatter himself from receiving $42,000 watches from Hublot another Swiss firm and a World Cup sponsor.

Jim Boyce, the British member of the executive, an Ulsterman who had hardly made a substantial impact in the recent past and Germany’s Theo Zwanzinger declare that the watches they got were at the bottom of the gift bag unbeknown to them. Of course not. FIFA regulations forbid the acceptance of any gifts of more than trivial value.

Garcia has for what is is worth apparently submitted his so far undisclosed report on Qatar and how they got the World Cup but since FIFA insisted it be presented before the start of the World Cup and consequently before the Sunday Times revelations on Mohammed bin Hammam and the appalling bribery scandal, its relevance can scarcely be conclusive.

There was a very old American joke that when Dwight D Eisenhower was President of the USA and John Foster Dulles his controversial Secretary of State, he’s say to him, “Don’t just say something; stand there!”

Maybe someone ought to say as much to Michel Platini, as he stumbles from one blunder to another. The latest concerns his fatuous threat to the French international winger Franck Ribery that if he persists in his decision to play no more for France, there is a FIFA rule, previously never heard of, that he can be compelled to play. Tell that to Steven Gerrard and Frank Lampard. Not to mention Der Bomber Gerd Muller, whose goal won the 1974 World Cup Final and a host of others who retired.

Platini may be technically and legally right, but practically he has, not for the first time, made a fool of himself.