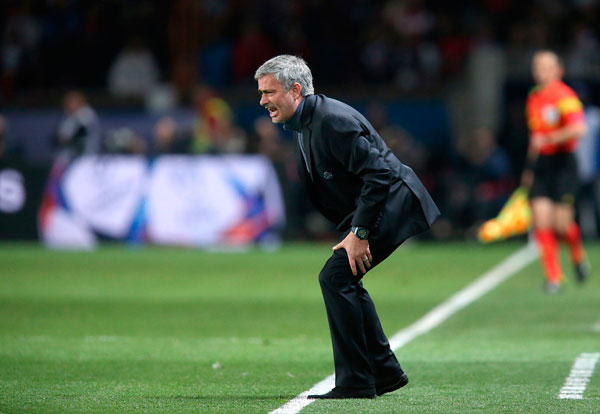 How special is the Special One? After two embarrassing defeats in a matter of days, one at Selhurst Park, the other at the Parc des Princes, Jose Mourinho has made scant sense.

Crystal Palace, struggling near the bottom of the Premiership, humiliated Chelsea and showed them that wingers emphatically live.

In Paris, Chelsea played a heavy price for lacking a valid centre forward. In the first half, Mourinho deplyed a “false” striker in the young German Schurrle.

Late in the second half on came the beleaguered £50 million Fernando Torres; but why? Predictably, given his recent form – alas, his dimished form, ever since he came to Chelsea – he did nothing of note, to be written off after the game however absurdly by Mourinho as not really a centre forward. Then what else could he be? If Mourinho thinks so little of him as he made all too clear, then why use him?

True, Samuel Eto’o was out injured but at least Demba Ba was on the bench and though seldom used of late, he remains a striker wanted by major clubs.

And then there is the curious case of Romelu Lukaku. He didn’t even score in his 15 games for Chelsea, but now, out on loan again, this time with Everton, he has looked powerful and penetrative. For some reason, I know not what, Mourinho doesn’t fancy him, but surely he has the pace and the power which Chelsea need now that Drogba is no more.

Torres has been described as Britain’s most expensive scapegoat. The word is that he is making so much money at Stamford Bridge, however infrequently he plays, a huge £175,000 a week, that he has no incentive to move unless some other bizarrely optimistic club meets his current wages.

Chelsea’s oligarch owner Roman Abramovich is said to have been instrumental in the purchase of Torres, just as he was responsible for the £30 million paid  for a fading Shevchenko.

Such sums mean little to him but new UEFA regulations may now limit Chelsea’s spending.

Schadenfreude is the German word dendoting pleasure in others’ misfortunes.

One suspects that there may be some of  it around after it emerged that Matthew Syed, once a champion table tennis player, now a cerebral sports journalist, has been abruptly dropped by Joey Barton as the ghost of his autobiography.

Syed and Barton? It hardly seems a marriage made in Heaven. Both are addicted to the frequent use of quotations. But whereas Syed, though there are times when one is reminded of  what the detective novelist Edmund Crispin called “the unnecessary cross reference,” appears to be quoting from a well stocked memory, the auodidact Barton – with a fearsome history – suggests the use of a quotations book.

Syed will no doubt be aware of the ancient expression, trahison des clercs, initially referring to the backsliding of the clergy but transfeormed in time to embrace such categories as the intellectuals.

Left to his own devices, Barton, who once stubbed out his cigar in the face of a young club mate, is hardly an elegant speaker, as his recent rant against Gary Lineker has shown.

Some years ago I was phoned by the agent of Vinnie Jones, then a Wimbedon hard man who once grabbed Paul Gascoigne by the genitals, and asked whether I would like to ghost his autobiography. I refused.

“But he thinks you’re a marvellous writer,” said the agent.

Barton, to be fair, has by and large been a far more disciplined figure in his latter involvement with Queens Park Rangers and Marseilles, and there is no doubt of his playing abilities. But Barton and Syed? Or should we say chalk and cheese?

Lord Justice Goldring, the coroner newly investigating the horrors, betrayals and complexities of the Hillsborough disaster, made an impressive beginning when he indicted the errors of the hapless Chief Superintendent David Duckenfield as causing the chaos.

Duckenfield lost his nerve and as Goldring declared, his literally fatal decision to open the gate at the Leppings Lane End, then pretending that it had been forced by Liverpool fans, was horrifically wrong.

But while Duckenfield was beyond doubt inept and shockingly mistaken, I hope the judge will dig deeper than that having stressed Duckenfield’s inexperience of crowd control, demanding why he was appointed at all. We were in fact told about it at the time but in the ensuing years, the facts seem to have been forgotten.

For the senior police officer who, a year earlier had presided successfully over the same Cup semi-final between the same teams, Liverpool and Nottingham Forest, had reportedly been dismissed from the role shortly before the disaster, held culpable for what was somewhat euphemistically described as horseplay among his officers.

Whether or not he was properly disciplined is surely quite secondary to the fact, that at least he had experience of policing Hillsborough. Surely any such disciplinary measures could and should have been delayed until that match was over.