Marco Polo Del Nero, wanted in the United States on charges of conspiracy, fraud and money-laundering, has thrown down the gauntlet to new FIFA president Gianni Infantino by reclaiming the presidency of the Brazilian football confederation.

The declared determination of Infantino to clean up world football administration will be dismissed as mere empty words unless disciplinary action is seen being taken with some urgency against the brazen challenge by the 75-year-old from Sao Paulo.

Del Nero was identified as a wanted man by the US authorities last December when he was named among 16 football officials charged with “racketeering, wire fraud and money laundering conspiracies, among other offences, in connection with a 24-year scheme to enrich themselves through the corruption of international soccer.”

FIFA currently has a restitution claim before the US courts reclaiming $1,673,171 in allowances and expenses from Del Nero who has been under extended investigation by the ethics committee for the past five months.

Del Nero had stepped down as CBF president in January “to prepare a response to the charges in the US.” Yet he has reportedly maintained a regular presence in the CBF headquarters and, unannounced, apparently took back the presidential reins last week.

Colonel Antonio Carlos Nunes, the interim president, has reverted to the role of senior vice-president.

Meetings which Del Nero led have included one concerning the poor form of the national team in the current World Cup qualifiers. It is understood Del Nero played a decisive role in maintaining Gilmar Rinaldi and Dunga as national team coordinator and coach respectively for the Copa America Centenario in the United States in June.

Del Nero will not be there. He has remained in Brazil ever since flying back early from Zurich in May last year for fear of US-demanded detention by the Swiss authorities, like the then CBF president Jose Maria Marin.

A clause in the Brazilian constitution rules that Brazilian citizens cannot be extradited from within the country.

Del Nero was elected as CBF president formally in April last year in succession to Marin, as had been agreed before the World Cup finals in 2014. Both men have been close allies of predecessor Ricardo Teixeira who is also wanted in the US and has retreated, like Del Nero, to the safety of Brazil.

The refusal of Del Nero to travel abroad meant he could not fulfil his responsibilities to FIFA, with whom he was an executive committee member, and South American body CONMEBOL. This led, in turn, to his reluctant initial withdrawal last December from both bodies and from the CBF presidency.

He returned to national command in January for only three days to ensure the election of Nunes as a vice-president. Nunes, a long-term ally, then became the oldest deputy so, in line with CBF rules, he took over as interim president when Del Nero stood down again. 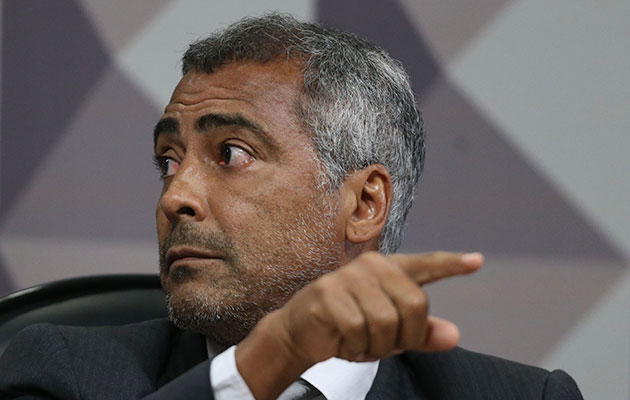 World Cup winner Romario has been a persistent critic of Del Nero.

Earlier this week Romario, the 1994 World Cup winner turned senator, described Del Nero as “the great plague of our football”. Romario is hoping to recall Del Nero for a second appearance in front of his parliamentary commission inquiring into the commercial activities of the CBF.

Last December Del Nero appeared before the commission but gave a string of evasive answers. Romario wants to question him further over concerns that he misled the committee over his foreign bank accounts.

However, in a sign of how much power remains with the old CBF cartolhas (‘top hats’) Romario has struggled lately to obtain the necessary quorum of commission members to take its work forward.

He had to appoint new members to obtain votes in favour of recalling Del Nero and summoning Teixeira and tourism businessman Wagner Joseph Abraham. However several original members of the commission have demanded that the parliamentary management office declare the votes invalid.