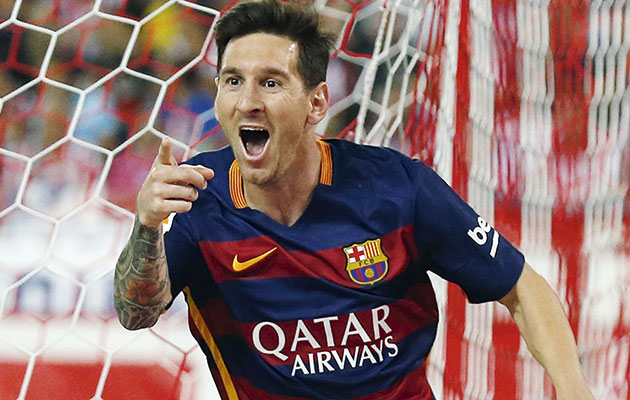 Lionel Messi was crowned FIFA World Player of the Year for a fifth time at the world football federation’s annual gala — the first one from which Sepp Blatter has been absent since the event’ inception n 1990.

Blatter last month was banned football for eight years for misconduct in office and the shadow of a scandal-scarred year hung over an event with UEFA president Michel Platini also absent through suspension as well as various other long-serving FIFA grandees either on bail or wanted in the United States.

At least, for one FIFA event, football itself rose above the controversies with Barcelona’s Messi an expected winner of the top prize.

The 28-year-old Argentinian collected 41.33pc of the vote with Real Madrid’s Cristiano Ronaldo second on 27.76pc and Barcelona’s Neymar third on 7.86pc. Ronaldo had won for the previous two years. Between them Messi and Ronaldo have won the past eight awards.

Messi had a remarkable year even by his own astonishing standards with five major club trophies, 52 goals and 26 assists in 61 games – meaning one goal every 101 minutes and one assist every 202 minutes.

He also accumulated the best minutes-per-goal rate – 80 – of anyone scoring a minimum of 10 goals across Europe’s top five leagues during 2015.

Messi was directly involved in 49 Barcelona goals in the Spanish league (34 scored and 15 assists), equal with Ronaldo. He also scored in all six club tournaments in 2015 from which Barcelona emerged winning five, most recently the Club World Cup last month.

Barcelona striker Neymar, 23, was the first Brazilian to finish in the top three since Kaka won the 2007 award. He scored 45 goals in 62 games and is joint top scorer in this season’s La Liga with 15, level with team-mate Luis Suarez.

Messi said: “It’s a very special moment for me to be back here on this stage, winning again another Ballon d’Or after seeing Cristiano win it.

The United States’ World Cup-winning midfielder Carli Lloyd, 33, won the women’s world player of the year award after scoring a hat-trick in the final against Japan, including a sensational strike from the halfway line. She earned the Golden Ball for best player in the tournament.

Former Germany striker Celia Sasic finished second despite retiring halfway through 2015 at the age of 27. However in the first half of the year she was top scorer in the World Cup with six goals and won the Champions League with Frankfurt.

Japan midfielder Aya Miyama, 30, captained her country to the World Cup final, where they lost to the US. She was third.

Lloyd said: “It has been a dream ever since I started with the national team. Keep your dreams and just go after them.”

The women’s coach award went to American Jill Scott. Second was Japan coach Norio Sasaki, whose side lost to the US in the final while England’s Mark Sampson finished third with 10.68pc of the vote after their third-place finish in Canada.

Real Madrid had as many players as Barcelona, four, in the world team of the year despite not winning a trophy.

Goalkeeper Manuel Neuer was German champions Bayern Munich’s only representative. The Premier League was the only of Europe’s top five leagues to not have anyone in the team.

The team, chosen by a poll organised by the players’ union FIFPro, was:

Barcelona coach Luis Enrique won the world coach of the year award after leading his side to five of the six trophies on offer in 2015, including the Champions League, La Liga and the Copa del Rey.

He beat Bayern Munich boss Pep Guardiola, who was second, and Chile’s Copa America-winning coach Jorge Sampaoli to the award.

Messi was second for a goal scored after a dash from halfway in the Copa del Rey final against Athletic Bilbao while Roma fullback Alessandro Florenzi’s 55-yard goal against Barca was voted third.

The year’s fair play award was granted to all football clubs and organisations supporting refugees.