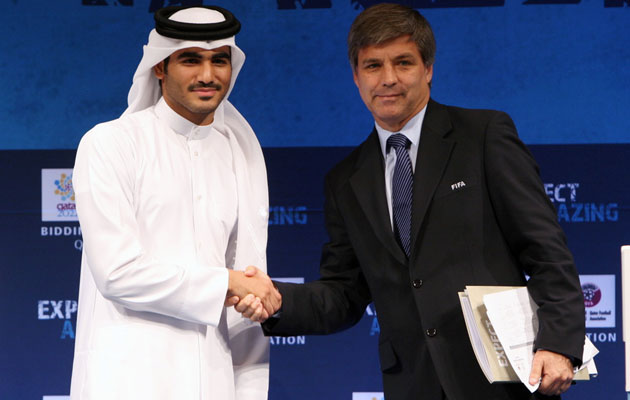 Harold Mayne-Nicholls, the Chilean who warned FIFA’s executive committee about the summer heat in Qatar, has been suspended from all football for seven years.

The world football federation’s ethics judge, Hans-Joachim Eckert, delivered today a judgment which was shrouded in mystery since it announced the verdict without stating the reason. The Chilean may regard this as prejudicial in itself considering the corruption themes currently swirling around the FIFA leadership.

Mayne-Nicholls, a former president of the Chilean federation, had considered running against Sepp Blatter for the FIFA leadership at the election this past May but decided Jordan’s Prince Ali bin Al Hussein stood the best chance of unseating the 79-year-old. In the event Prince Ali withdrew after pushing the election to a second of voting.

The statement from the ethics committee said:

“The adjudicatory chamber of the independent Ethics Committee, chaired by Hans-Joachim Eckert, has decided to ban Harold Mayne-Nicholls, former chairman of the Bid Evaluation Group for the 2018 and 2022 FIFA World Cups and former Chilean football association president, from taking part in any kind of football-related activity at national and international level for a period of seven years.

“The decision was taken following a hearing in the presence of the accused and the chairman of the investigatory chamber of the Ethics Committee, Dr Cornel Borbély. In accordance with article 36 of the FIFA Code of Ethics [Confidentiality] more detailed information will be given after this final decision becomes effective.”

Mayne-Nicholls headed the technical commission which assessed all the bids in the controversial 2018-2022 campaign. His report noted specifically the searing summer temperatures in Qatar, advice which a majority of the executive committee either ignored or did not hold as significant.

However, the work proved poisonous for Mayne-Nicholls since he was absent so long that rivals and critics ousted him from the Chilean federation leadership. Since then he has concentrated on his own youth football foundation while also taking time out for a marathon car drive all around Brazil to support the Chilean national team at the World Cup finals.

His role as FIFA’s development director for South America was terminated by the world federation after he rejected an instruction that he should ‘make his peace’ with his successors in the Chilean federation.

Mayne-Nicholls fell foul of the ethics committee last November because of an inquiry to Qatar’s Aspire Academy over the possibility of a son and a nephew becoming unpaid interns.

He insisted that correspondence records held by the Chilean federation would clear his name by clarifying dates and intention; however, since he was no longer president he was denied access to the documentation.