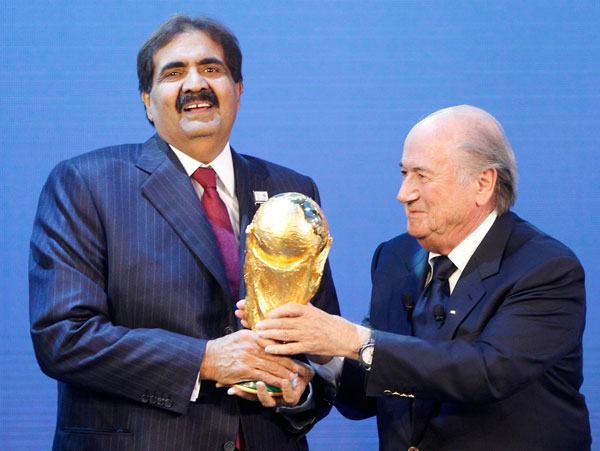 The spectre of scandal which haunted FIFA over the 2022 World Cup award to Qatar has materialised again with allegations of a cash deal between disgraced ex-vice presidents Jack Warner and Mohamed Bin Hammam.

An investigation by The Daily Telegraph claims to have uncovered “documents [which] appear to show” that Warner and his family were paid almost $2m “by a Qatari firm controlled” by Bin Hammam.

One invoice “for work carried out between 2005 and 2010” was issued within weeks of the votes by the executive committee on December 1 which awarded the 2018 finals to Russia and 2022 to the Gulf state.

The Qataris, who threw enormous promotional resources at the bid, have always denied any wrongdoing. So have Warner and Bin Hammam.

FIFA’s 2022 award to Qatar was a political earthquake whose after-shocks have reverberated in controversy over a timing switch from summer to winter and human rights concerns extending from workers’ representation to laws against homosexuality and alcohol.

Only yesterday a new war of words exploded between the International Trade Union Confederation and the Supreme [World Cup organising] Committee over the employment conditions of Asian construction workers under the medieval kafala system.

One of FIFA’s greatest modern blunders was the decision, for marketing reasons, to run the 2018 and 2022 bids simultaneously. This prompted allegations of vote-rigging both through illicit payments and ‘sweetheart swap’ deals.

These and further cash scandals forced the departures from the exco of Warner (the then president of CONCACAF), Bin Hammam (then Asian confederation president), Chuck Blazer (then general secretary of CONCACAF) and Ricardo Teiexeira (then Brazilian football president).

Two members of the exco (Amos Adamu of Nigeria and the then Oceania president Reynald Temarii) were banished before the vote after being caught in a votes-for-cash sting.

Warner walked away from all his football positions in the summer of 2011 rather than answer allegations of bribery in the FIFA presidential election campaign of that year. Bin Hammam contested those allegations but, ultimately, was banned for life.

Since then Warner has concentrated on his high-profile political career back in Trinidad & Tobago. He is not believed to have ventured out of the Caribbean ever since.

In the meantime one of his sons, Daryan Warner, has been reported as living in Miami and assisting the FBI with its inquiries into the tangled, covert financial arrangements between family and football businesses and CONCACAF.

The Telegraph report claims that “a company owned by Mohamed Bin Hammam appeared to pay $1.2m to Mr Warner in 2011.” These monies were to be made “payable to Jack Warner”. Reportedly his two sons and an employee were paid a further $1m by the same Qatari company.

Further the Telegraph says that “at least one bank in the Cayman Islands initially refused to process the payment amid fears over the legality of the money transfer. The money was eventually processed via a bank in New York – a transaction that is understood to have come to the attention of the FBI.”

Warner and Blazer, significant players in raising central and North America’s power within FIFA, fell out over Warner’s involvement in the offering of cash expenses to Caribbean officials who attended an election campaign conference staged for Bin Hammam in Port of Spain in May 2011.

One factor in the Warner/Blazer fall-out is considered to have been Warner’s World Cup bid support for Qatar rather than for CONCACAF’s own ‘home’ bid from the United States.

The latest allegations are certain to prompt demands for a re-vote. This is out of the question. Firstly, the 2018 and 2022 votes were so tightly enmeshed that voting again on 2022 would also mean voting again on 2018; secondly, from a legal standpoint, the hosting contracts have been long since signed and sealed.

Michael Garcia, FIFA’s independent investigator/prosecutor, is investigating claims of irregularities in the 2018/2022 bid process. He is expected to submit a report later this year.

Last year FIFA Congress voted to alter the World Cup decision-making system. In future the exco will recommend candidates to a vote of the entire congress. The next World Cup to be awarded will be 2026, with a decision likely in 2019.