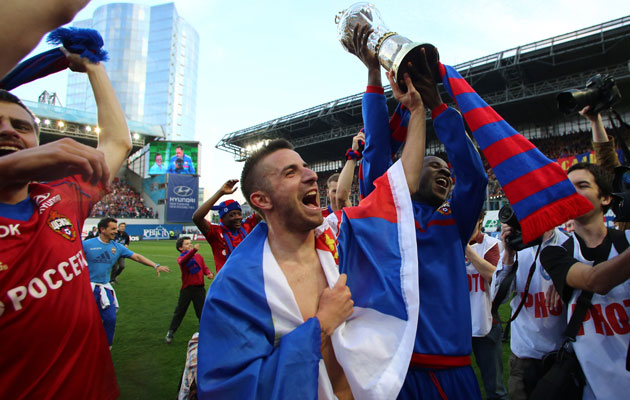 Russian Sports Minister Vitaly Mutko has responded to the national team’s World Cup flop in Brazil by preparing to order a cutback on clubs’ use of foreign players.

Mutko promised action while in Brazil during the finals and has now confirmed that a bill to tighten up on foreign imports is ready for submission.

He identified the high number of foreigners as detrimental to the national team in an increasingly serious manner since Russia will expect a significant improvement when the country hosts the finals in 2018.

Mutko, who is also a member of world federation FIFA’s executive committee, compared the detrimental effect of foreign players in Russia as similar to England who also crashed out in the World Cup first round.

The crucial difference between the countries is that Mutko has the power to legislate to enforce change in Russia.

The British Sports Ministry and/or Football Association have no such power over Premier League clubs which are, in any case, bound by European Union laws permittint the freedom of movement of labour.

Under the terms of the bill Mutko’s Sports Ministry would control the numbers of foreign imports in every sport in Russia. Legal powers are essential to impose the government’s will on football club owners who have repeatedly opposed such controls.

The draft law would set controls on a foreign player’s status, age, contract length and residential time in Russia while training inbetween competition.

The bill could become law by next spring.

Igor Ananskikh, the head of the State Duma’s Committee for Physical Culture and Sport, told Itar-Tass agency that a reduction in foreign player numbers was essential for the national team.

He favoured an initial reduction from seven foreign players on the pitch to five but – as a compromise to obtain club support – only up until 2018.

National coach Fabio Capello, reputedly the higher-paid manager in the world, came in for heavy criticism after Russia’s first round World Cup exit.

He continues to enjoy the crucial support of Mutko though his status remains in some doubts after reports at the weekend that he has not been paid for three months while the Russian federation awaits its World Cup participation pay-off from FIFA.