The managerial maelstrom. Could even Jose Mourinho on £10 million a year at Chelsea soon be on his combustible way? Has Jurgen Klopp for all his impressive German record bitten off more than even he can chew at Liverpool? Did Tim Sherwood deserve to be sacked by Aston Villa? Can Bournemouth’s Eddie Howe turn round an admittedly much weakened team which has conceded ten goals in its last two Premiership games?

Mourinho in recent weeks has seemed not only out of order but arguably out of control, while his Chelsea team has been sinking down the league which it dominated only last season. Mourinho’s antics at West Ham, where he abused the referee Moss so outrageously as they came down the tunnel at half time that he was called to the referee’s room and very properly sent off.

So far Chelsea’s hierarchy have indulged him, not least over his appalling treatment of the club’s doctor Eva Carneiro. But, to put it objectively if not cynically, results are the ultimate criterion in our fiercely competitive football, and Mourinho’s have been a huge anti-climax to last season’s; bar that embarrassing setback at Stamford Bridge against a ten-man PSG team in the Champions League.

Were Mourinho to be dismissed compensation, given his reported £10 million a year salary, would be huge, but Roman Abramovich, who, remember, has sacked him before, could comfortably afford it as few other owners could.

Jurgen Klopp arrived at Liverpool to a fanfare of trumpets, yet I wonder whether he is regretting his decision to come. There is no doubt of his galvanising abilities, the hectically impressive and versatile football he achieved while at Borussia Dortmund, though note that by the time he left, the side seemed to have run out of steam.

His policy of so-called gegenpressing was no longer proving productive. Whether he can impose it on the present Liverpool team seems uncertain. Even the most talented manager is only as good as the players at his command and Liverpool have been severely reduced by the departure over a year ago of the prolific Suarez. Plus the persisting injuries to the attacker with whom he blended so successfully, Daniel Sturridge.

Even Klopp cannot make bricks without straw and Liverpool’s transfer policy since the sale of Suarez has left them and him with no better than a moderate squad. The return to fitness of the formidable Chistian Benteke – the man whose departure from Villa had more than anything else perhaps to do with the demise of Tim Sherwood – does give Liverpool a power in attack which could lead to recovery.

But you can’t make a silk pure out of a sow’s ear, and for all his flair and vigour, you wonder whether Klopp may privately be wondering if he has made the right move.

Can Bournemouth survive? Conceding those ten goals in a mere two games suggests the odds are against them and Eddie Howe.

His and their progress to the Premiership has been a splendid story, but luck has been hideously against them. To lose a bunch of their best players, among them the incisive striker Callum Wilson who was beginning to look one of the best in the Premiership, to not have the talented young full back Tyrone Mings, signed from Ipswich, at all this season: then to the horribly let down by each of his two goalkeepers in consecutive games.

Howe has become an almost Job like figure and commands much sympathy.

Much happier times indeed at West Ham for Slaven Bilic where the early season stumblings in the meaningless Europa tournament have proved an irrelevance. The Hammers have put together a team full of talent without excessive expense, and now they have Andy Carroll back as well, with that formidable head creating vital goals in his first two reappearances as a substitute.

Which has raised suggestions that he should again play for England. My own feeling is that though he, as the traditional target man, so dominant in the air, hardly fits in with Roy Hodgson’s current plans, there is a strong case for using him as Bilic has so far done as a substitute, coming on relatively late and changing the pattern of the game.

Power in the air is never to be undervalued, and Carroll, who has it in abundance, is capable, as we have seen so recently, of changing any game.

Losing Fabian Delph in midfield and Benteke up front put Villa and their doomed manager Tim Sherwood all too emphatically on the back foot. He now says he wasn’t responsible for the ensuing unsuccessful transfer policy; the club insist that he endorsed it.

Getting Villa to the FA Cup final at Wembley last season, even if they failed when they got there, was a major success. We should see more of Tim. 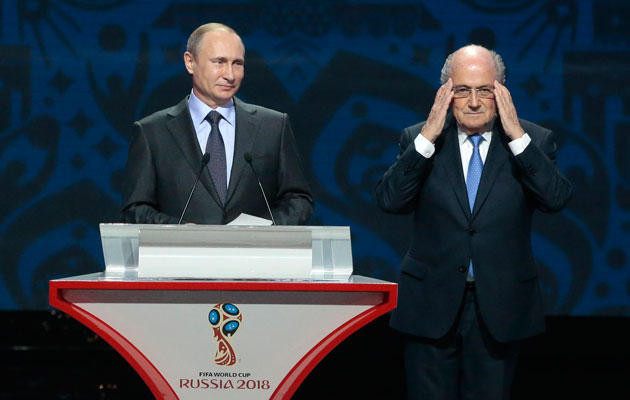 With friends like this…Vladimir Putin once recommended Sepp Blatter for the Nobel Peace prize.

But what did Blatter blab? His Russian revelation, though it may not exactly come as news to most of us, made, astonishingly, to Russia’s Tass TV programme (why didn’t they try to bury it?) seemed astonishingly naïve.

Trying as it seems clumsily to put the blame on Michel Platini for the eventual choice of Qatar rather than the USA seemed vindictive rather than fully relevant. We know all too well that Platini, whatever his motives, seemingly political rather than financial, disgracefully backed Qatar despite UEFA’S clear interests. Blatter now insists that it is too late to take the World Cup away from Russia. Really?

Greg Dyke wants to get England’s bid money back and good luck to him. His support for Platini before the dirt so recently the fan was lamentable. And horrid memories of how Andy Anson’s World Cup bid led to the courting of villains like Jack Warner remain all too horridly vivid. Neither Russia nor Qatar should keep the World Cup.  This is what Greg Dyke and ideally others should be insisting.