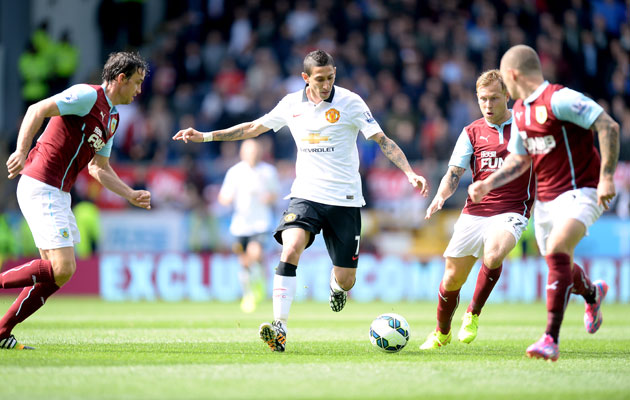 Angel Di Maria for a fortune, Falcao for a reported £8 million – and just for a loan! Chicharito, the vibrant little Mexican off to Real Madrid – if he is good enough for the European Champions, why is he not good enough for Manchester United, who won’t even be competing in the European Cup this year?

You wonder if Louis Van Gaal is privately regretting the fact that he aver agreed to take over at Old Trafford where he and his team have made a worse start than even poor doomed David Moyes did last season. Not to mention another shaming defeat in the Capital One Cup at MK Dons, albeit with a scratch team. And even at promoted Burnley, with Maria in the side, they could not score or win.

The team have found it very hard to adapt to Van Gaal’s favoured three-man defensive scheme, however well it served him and Holland in the World Cup.

Darren Fletcher the Scottish midfielder had spoken about the tactics with humility, after the draw to Burnley, no doubt pleasing Van Gaal when he accepted the blame for what had been going so wrong on the pitch, He was sure, he said, that in time, they would benefit and improve from the new tactics.

But the old saying that you should cut your coat according to your cloth seems highly relevant to me.

By sharp contrast with what Harry Redknapp did with QPR on the same day. I saw the game at Shepherds Bush in which Harry gave up the three-man defence, beloved by his new assistant, Glenn Hoddle, a week after the shocking 4-0 defeat at Tottenham, and profited from the change.

With four at the back the team which also, though admittedly not at full strength, had lost days earlier at humble Burton Albion of League 2, looked a different and more resilient proposition.

Shelling out such vast sums of money for attackers when they are so lacking defensively and in midfield smacks of panic to me. But Van Gaal, for all his tremendous track record, his successes at clubs such as Ajax, Barcelona and Bayern, may have succumbed to hubris, the Greek word for excessive pride, which traditionally gave way to Nemesis.

Something of the same may well be said about another distinguished European manager in Felix Magath, he too once again the chief at Bayern and long ago, scorer for Hamburg of the winning goal in a European Cup final.

True, he took over at Fulham when things were going horribly awry, though his immediate boast was that he had never managed a team which had been relegated. Well now he has, and to the horror of their fans, Fulham in the Championship, have made an appalling start to the season, losing their first four games and at last picking up a point at home against their fellow relegated side Cardiff City. A win the Capital One Cup a few days earlier at nearby Brentford, was scant consolation.

But Magath has been long on hyperbole and self-promotion despite these setbacks in which it was all to easy remember the adage of Alan Hansen, “You win nothing with kids.”

Yes, I know, this proved an ill-chosen apothegm, since a team of dazzling young Manchester United players, with the likes of Ryan Giggs, David Beckham, Paul Scholes and the Neville brothers, proceeded to burn a blue streak – or a red one.

But overall I don’t think Hansen was wrong, and in getting rid of so many experienced players and relying on a platoon of unquestionably talented and promising youngsters, Magath was surely tempting fortune.

It made little sense, in a joint interview with the club’s owner, Shahid Khan, to put the blame on the previous owner Mohammed Fayed, alias in the terminology of Private Eye, the Phoney Pharaoh.

However controversial a figure he may have been, he was the saviour of Fulham, spending vast sums to keep them not only afloat but highly competitive.

“I’m the right man, the only man,” trumpeted Magath after the draw with Cardiff.

Yes, a number of gifted and significant players slipped away in the last epoch of Fayed – there was no keeping the best of them, Dimitar Berbatov – but overall, Fulham under Fayed flourished.

A competition as physically tough at the Championship is surely no place to rely on youngsters.

Meanwhile, not far away, Chelsea at last dispensed with poor Fernando Torres. Always a ludicrously expensive and mistaken buy when, at Liverpool, his great days were behind him. A £50 million transfer fee and a whopping salary amounting allegedly to some £9 million a year were presumably the choice of the billionaire oligarch Roman Abramovich.

Why do Milan want him? And why did Spain choose him for two successive World Cups when the spark had gone? After Chelsea recently beat Leicester, coach Jose Mourinho eulogised him, which I suppose should have warned those of us who were present that Torres would soon be on his way.