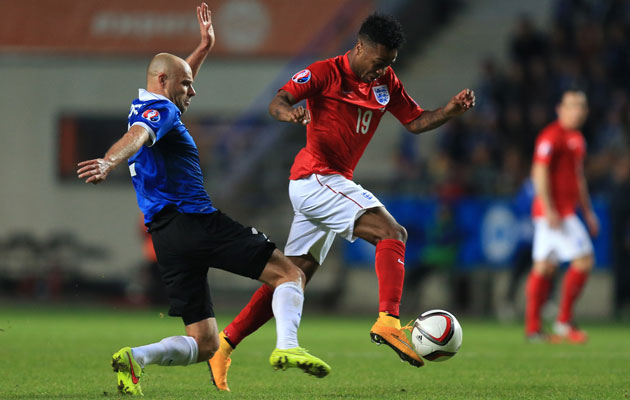 Where was Dr Steve Peters when they needed him? Or at least Raheem Sterling who was pulled out of England’s initial line up in Estonia, declaring that he felt fatigued.

Roy Hodgson, who decided not to start him in Estonia, had previously said, “When Raheem shows signs of not being quite as sharp, not doing as well, trying too hard, that might be the moment we think we have to manage this and give him a break. But that is not the case at the moment.”

In fact it did indeed seem to be the case but neither Roy nor Dr Peters, who reportedly found himself marginalised at the World Cup in Brazil, appear to have been aware of it.

That Dr Peters did not travel with the team to Estonia, who for all their alleged inadequacy (hardly to be seen on the field) were surely a far harder opponent than pitiful San Marino, makes not the slightest sense.

At the Grove Hotel in Watford, Dr Peters was available on three different days to speak to players “if they wanted to speak to him.”

A curiously negative role when surely the ideal situation would be for a psychiatrist to take the initiative, look for any signs of unease, and deal with the player accordingly.

That Sterling when he came on after 74 minutes in Estonia showed no evidence of distress or unease suggested that his previous uncertainly had been all in the mind rather than the legs.

Certainly this highly talented 19-year-old needs special care and attention when in such a glare of publicity but apart from Roy having the good sense not to start him in Estonia, where is it coming from.

As to England’s dreary performance, a meagre 1-0 victory against a team reduced to ten men, it was a cause for alarm. Limited alarm since England find themselves in a soft qualifying group and have already won arguably the most difficult fixture by beating the Swiss away.

Yet the team’s serious deficiencies were all too apparent in Estonia and all this facile talk of diamonds – a tactician’s best friend? – seems scarcely relevant.

For a start, I believed it to be a waste of Wilshere, despite the fact that he was widely praised for his performance in deep midfield. His was the glorious through pass which late in the game sent Rooney away to miss so palpable a chance, frustrated by the goalkeeper.

Wilshere, as one has so often said before, is arguably the only English player of his generation, alas, who can imaginatively pass the ball. Moreover he can also run with it effectively and beat opponents, something which becomes a potential risk when he is playing so deep.

Diamonds, I suggest, should in this case not be forever.

And what of wingers? The lack of them – with the potentially effective outside right Oxlade-Chamberlain more central than flanker – was surely one major reason why England found it so difficult to break down the Estonian defence.

It is good to learn that Theo Walcott is almost ready for the fray for he can give pace and dynamism to the English right wing.

Andros Townsend, the young Spurs winger who came on briefly but effectively against San Marino – a positive choice by Hodgson of a player hardly in favour at his club but provenly effective with England in the past – might well have been profitably used in Estonia against a massed defence which England found so difficult to penetrate. 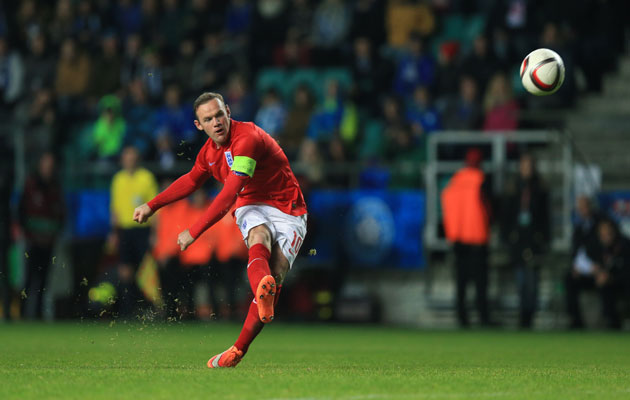 Wayne Rooney scores against Estonia, to notch up his 43rd goal for England.

Meanwhile there has been much talk of Wayne Rooney’s chance to become the leading England scorer of all time, overtaking Bobby Charlton himself at the top.

But as we know there are lies damned lies and statistics and Rooney, though he began so supremely well for England as a 17-year-old, it has taken many years to amass all those goals.

One’s mind goes back to the World Cup of 1958 when neither Bobby nor Nat Lofthouse played for England in Sweden. Nat Lofthouse because he wasn’t chosen even though England took just 20 players when they could have taken 22; Bobby, because to the fury of the press he was there but never got a game.

Lofthouse, the Bolton Wanderers home grown centre forward, soon after the World Cup emphasised the error of his omission with a fiercely productive display at Wembley against the Soviets who had knocked England out in Sweden in a Gothenburg play-off.

His scoring rate with England (30 goals in 33 matches) was far superior to any of the “Big Four” – Rooney, Gary Lineker and Jimmy Greaves being the others.

Charlton, still plainly traumatised by the horrific Munich air crash with Manchester United the previous winter, had had a poor game in Belgrade where England were beaten 5-0 by Yugoslavia, but was hardly the only one.

Bizarrely, England – which at that time meant team manager Walter Winterbottom known to have a free hand then – threw two uncapped players in Peter Broadbent and Peter Brabrook into the lost play off against the Soviets.

As for Jimmy Greaves, he had a mediocre World Cup in 1962 in Chile and was omitted by Alf Ramsey in 1966 after being injured against France in England’s second game.

Not to be picked for the Final was a fearful blow; he would surely have scored from the easy chance which Roger Hunt badly missed.