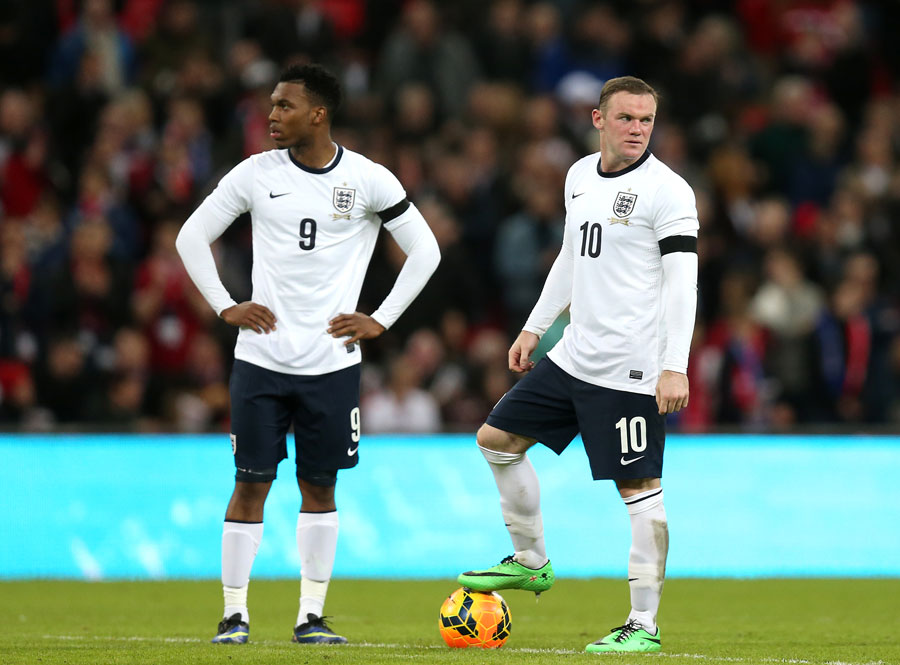 The Rooney-Sturridge enigma. Just as one pundit declared that Wayne Rooney should be dropped so that Liverpool’s Sturridge can flourish, so another insists that they are a firmly established England pair.

On the evidence of the recent international so laboriously won against a mundane Danish team, it seems to me anything but certain that the pair can operate together. In a word, Sturridge came to life only in the second half, after Rooney had gone.

In the first he seemed inhibited, often forced wide when he would clearly prefer to be in the middle, while Rooney, aside from one brisk exchange on the left with Ashley Cole, which could have resulted in a goal from Cole’s cross, was largely unexceptional.

Beyond doubt Rooney is one of the sadly few England players of world renown, Steven Gerrard being another, but for all his undoubted talents, the truth is that England once he had gone and Danny Welbeck had come on, the wheels at last began to turn.

It was notable how much more at home and effective Welbeck looked in the middle, where he had several incisive attempts on goal, than when Hodgson sticks him out on the left wing.

In defence, the towering £9 million Cardiff City centre half, Steven Caulker, who could be doing such invaluable service to a rocky Spurs defence had the club not sold him, should surely be a candidate for a World Cup place.

Caulker’s recently appointed manager, Ole Gunnar Solksjaer, certainly thinks so, advancing his credentials after Caulker had twice headed goals for Cardiff at home to Fulham. Ever since Terry departed the international scene, and he has no wish to return, and Rio Ferdinand lost his pace, the England defence has looked rocky in the middle.

Cahill is arguably the best of those who have been playing but even he at international level has a tendency to make costly basic mistakes. Embarrassing memories remain of the goal he gifted Scotland at Wembley.

As for Phil Jagielka, he hardly shows the quality of a dominant international centre back.

All too embarrassing still to remember the way England’s defence broke down through the middle, obliging Hart to make a brave and breathtaking last ditch save to thwart an incipient goal.

Good though to see young Oxlade Chamberlain back at last in such lively action not least in the sad absence of his Arsenal team mate Theo Walcott.

Oxlade Chamberlain has the so-called big match temperament as he showed against Brazil in Rio last summer, and he is just as much at home in central positions as he is on the wing, where I think England most need him. Where once his swift and gifted father played for Stoke and England.

Fulham’s managerial oscillations make you wonder at the wisdom of such choices, as the club slips closer and closer to relegation.

It wasn’t wholly surprising that Jol should have been removed, since the team was plainly foundering. His fellow Dutchman Meulensteen was always a coach rather than a full blown manager, and his decision to enlist in managerial roles Alan Curbishley and Ray Wilkins seemed at the time like a couple of somewhat desperate blasts from the past.

Yet under Meulensteen performance and results were definitely improving, not least when the side forced that 2-2 draw at Old Trafford. Then suddenly the Dutchman has gone as indeed have Curbishley and Wilkins and here is Felix Magath, once a fine European Cup winning goal scorer, manager of a string of leading Bundesliga clubs and the music has changed yet again.

Though hardly for the better. Known as a hard man who works his players rigorously in training, Magath’s reign so far has been anything but reassuring.

Why, in that disastrous game in Cardiff, did he not only start the £12 million Greek international Metroglou for the first time, after just one substitute appearance, but keep him on the field throughout though he was sadly ineffectual?

Why did he suddenly sling the inexperienced teenager Woodrow into the mix, when so much was at stake?

Mitroglou was already damaged goods when he arrived, so how did he manage to pass the essential fitness test, always assuming, as one must, that there was one?

Reams of news and comment on the morning of Arsenal’s European Cup match in Munich against Bayern, but one searched in vain in at least two leading newspapers for any mention of the sensational radio news of the evening before. That Uli Hoaness, once the dazzling young outside right for Bayern and World Cup winning West Germany, faced a potential seven-year sentence for tax fraud.

Having voluntarily admitted to an income tax evasion via Swiss banks of 18 million Euros even though the initial charge had specified 3.5 million. It was suggested that Hoeness had come clean in an attempt to evade condign punishment.

He is, of course, and has for some time been, a senior executive of the club for which he once played so well. Very sad.