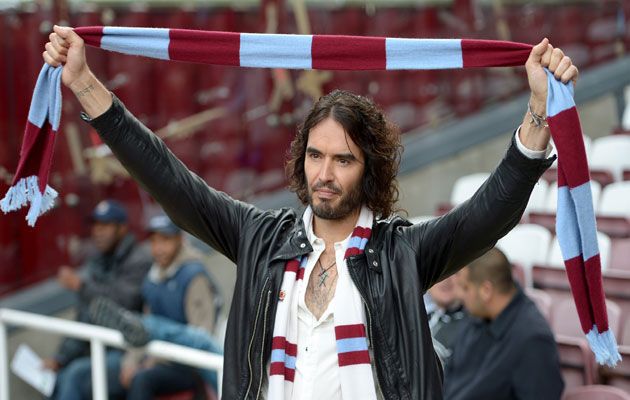 Like it or loathe it, Russell Brand is a sign of the times, what Germans call the zeitgeist: and what wretched times they are.

To quote an old English saying, “There’s no show without Punch,” and our emetic, irrational, infinitely self-promoting Punch is Russell Brand. Torrents of verbiage, both orally and alas in print, even to the extent of a long new book.

Confused and bombastic though his opinions are – he has even been ridiculed by that other noted auto didact, Joey Barton – the book is even given superabundant prominence, when ridiculed in a leading Sunday paper.

The previous day at West Ham, where for no good reason – even if he is purportedly a Hammers fan – he was a guest of the club – he even succeeded after its victory against Manchester City to infiltrate manager Sam Allardyce’s television interview and plant a kiss on his cheek.

For one illusionary moment, one hoped the sequel would be the immediate bum’s rush, but as it was, Sam seemed almost to enjoy it.

And Brand has also been seen on Match of the Day, where Gary Lineker treated him with excessive geniality. Perhaps none of this should surprise us, despite a catalogue of outrage, not least the vile telephone trick he and the ineffable Jonathan Ross played on poor Andrew Sachs, over what might politely be described as Brand’s liaison with his grand daughter.

Yet Brand has been able to scale what might even be called the social heights in his rich romantic life. You might see him as a walking garrulous commentary on the world we live in.

Enthusiastically reviewing David Goldblatt’s new book The Game of Our Lives in the same arts magazine, the versatile Dominic Sandbrook writes, “Thirty years ago football in Britain seemed destined for the scrapheap. With attendances in long term decline, most games were played out before a few thousand diehards in wretchedly dilapidated grounds, soaked with rain and urine.”

Really? I must have been going to the wrong, or right grounds, for though I am in total agreement that the post Taylor report was vitally needed to inspire the building of renovated all seater stadia, to say that crowds dwindled to such an extent – however uncomfortable the facilities may have been – is simply a travesty of the facts. You might I suppose say we have gone from the Gorblimey to the pseudo sublime.

I deplored at the time the birth of what I called The Greed Is Good League and see no reason to regret it. Yes, stadia are infinitely superior but many are afflicted with what Roy Keane once called The Prawn Cocktail Sandwich syndrome.

Expensive facilities which alas can no longer be afforded by the bulk of those working class fans who were the essence of the game, and not even by the young progeny of those who can. And as one predicted at the time the FA and Graham Kelly’s sell out, the majority of clubs outside the ranks of the prosperous are finding it harder and harder to keep afloat.

Yes, in the good old bad old days violence on the terraces was horribly endemic – nowadays surveillance by the police by and large forced it out to city perimeters. But a multiplicity of packed grounds now severely reduced in size – guaranteed an atmosphere of passion and excitement.

True, there could be occasions when even a major club like Chelsea, fallen on barren times, attracted alarmingly low attendances. But this was – please look at the sheer statistics – the exception that largely proved the rule.

Whither Arsenal, Whither Wenger? After his team’s fortuitous and quite unmerited win at Anderlecht, followed by a somewhat farcical win at Sunderland – propitiated by two incredible defensive errors by Sunderland’s centre back Wes Brown and by the Gunners’ ex-goalkeeper, Vito Mannone – Wenger was even fantasising about the Gunners winning the League – something they haven’t done in over a decade.

A deferential piece in a Sunday newspaper, while welcoming the award of a three year extension to Wenger’s contract and properly praising the fine work he has beyond doubt done for Arsenal over the many years, did at least gently suggest that while the contract ran, he might set about grooming a managerial successor, with he himself to be translated into a senior executive position.

Yet in the Italian Camionato, and probably in the Spanish Championship too, several appalling results for Arsenal last season would have resulted in Wenger being summarily dismissed.

A 6-0 defeat at Chelsea. Six Goals conceded at Manchester City. A rout at Anfield by Liverpool. Winning the FA Cup Final, somewhat laboriously, against modest Hull City – who came so close to an equalising late goal – hardly made up for nearly a decade of barren striving.

True, the acquisition this season of the splendid Alexis Sachez has electrified the attack. But without Theo Walcott, fortunately almost fit again, there has been so little progress on the flanks, while looking at the midfield, you wonder not for the first time why Alexandre Song, splendid for Hammers against City, was allowed to depart.